The QB Is Dead! Long Live the QB! Persa Leads Northwestern to Ugly Win Over Vanderbilt, 23-21

Share All sharing options for: The QB Is Dead! Long Live the QB! Persa Leads Northwestern to Ugly Win Over Vanderbilt, 23-21

Well, that was a bit too fun.

Northwestern went deep (ok sort of deep) into the heart of SEC country and came back with a win. Of course, it was a two point win in a game that should not have been nearly as close as it turned out. But, that's the Wildcats, isn't it? They do this. They make nearly everything harder than it has to be. At one point, the announcers said that with Saturday's victory, the ‘Cats are now 25-7 in their last 32 games decided by seven points or fewer. And as interesting a stat that is, I really wasn't surprised by it.

Before I get into my thoughts on the game itself, a note about the broadcast. Tonight's game was perhaps the most egregiously biased broadcast of a college football game I can remember. Look, I know that CSS has a contract with the SEC and that this was a home game for an SEC team. And I get that the two broadcasters - Matt Stewart and Chris Doering - have SEC / Southern ties (Stewart is a broadcaster based out of Atlanta, and Chris Doering played at Florida back in the day).

Throughout the entire game the announcing crew was CLEARLY pulling for Vanderbilt. If the Commodores scored or had any sort of big play, the announcers were effusive in praise. If Northwestern did something well? Yeah, not so much. It sounded like Dan Persa had just run over someone's pet hamster with a scooter. At one point, the announcers even said that the "stars of the game" were the players on the Vanderbilt secondary. The same secondary of a team that was down by more than a score and that had already given up oodles of pass yardage and a TD on the night. Hmm.

As annoying as that was to deal with as a Northwestern fan, it wasn't what made the announcing so horrid. I can live with broadcasters who seem to be homers when they call a game. Really, my opinion of their quality was established near the last play of the game. Northwestern had the ball, with a two point lead. It was third down, and they needed to convert to end the game. Miss the conversion and you have to give Vandy one last shot to win it. Dan Persa kept the ball and was running towards what appeared to be an easy, game-ending first down. All of a sudden he was leveled by a Vandy safety that seemed to come out of nowhere, just shy of the end of the chains. Very shortly after that, a flag appeared on the field.

After praising the hit on Persa for what seemed like five minutes, one of the announcers saw the flag on the field and said that he hoped that the ref wasn't going to call helmet-to-helmet. Well, that's what the ref did. Specifically, a personal foul on a high hit. That's a penalty that's good for 15 yards and an automatic first down. Effectively a game ender.

The reaction by the announcers was swift, loud, and absurd. Protests of, "Come on!" "That's a horrible call!" and "I can't believe they're going to allow the game to end on a call like that!" were heard. Knowing the reputation of the SEC refs, I was eager to see the replay.

What did it show? Flagrant helmet-to-helmet contact. Need proof? This (admittedly poor quality) picture was taken from the online recap of the game. The guy with the ball is Dan Persa. The guy who is leading with his helmet directly at Persa's head is the Vanderbilt player that was called for a high hit. 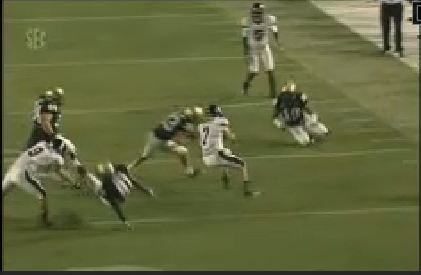 The best part of this was the reaction of the announcer. On the first replay: "That was a horrible call! He hit him on the shoulder pad!" (Somehow, the shoulder pad had miraculously moved up to the position of the helmet). On the close-up angle that followed shortly, "It may have a been a bit high, but he didn't have any mal intent!"

Mal intent? When did mens rea become part of college football? I swear I felt like I was back in 1L crim law discussing premeditated murder and malice aforethought. Guess what. Intent doesn't matter. You can't lead with the crown of your head. The rules don't care if you intend to hurt the other player or if the other player is moving at an angle. Leading with your helmet is a foul, and the refs are supposed to call it even if the foul is "in question." Oi. Just terrible, terrible broadcasting.

Okay, enough of that. On to the game.

The good news is, Northwestern won. They didn't pull a Syracuse. The bad news? Vanderbilt is not good enough for this game to have been this close. While having a win is great, this feels like a bad omen on the season to me.

Dan Persa actually had an excellent debut. He went 19-for-21, threw for 220+ yards, ran for 80 more, and had 3 TDs. I'll take that from him any day of the week. He did have a turnover when he got stripped of the ball at one point, and he'll certainly need to work on ball security going forward. All in all, a good night.

Jeremy Ebert was a standout. The guy who had only 200 yards all last season had nearly 100 receiving yards on the night AND a 33 yard TD. It seems like Persa has a new favorite. Sidney Stewart and Drake Dunsmore were relatively quiet, but I hope to see more of them as the season goes on. The running game, outside of Persa, was kind of terrible. Arby Fields finished the night with negative yardage, and outside of one outstanding catch, was pretty much a non-factor. It's not like this is much of a change from last year, but I was hoping for more.

The main concerns I have, though, regard the offensive line and the defense. For most of the first half, Persa was pressured by a not all that scary Vandy defense in ways that made me worry. If the offensive line lets Persa suffer like this against Vanderbilt, what's going to happen against Iowa? Against Wisconsin? I don't want to imagine it.

The defense is also giving me heart burn. I knew the secondary and the rest of it would be a bit green going into the season, but, 430 yards given up? Nearly 200 rushing? Way, way too many missed tackles. Way too many holes open that should not have been. Just messy all around. Again, this is against a team that, while possessing the SEC Speeeeeeed, isn't exactly the class of their conference. Northwestern has to get this under control if they want to survive when they get to the meat of their conference schedule, or things are going to be seriously ugly this year. Beyond Pizza! Pizza! Bowl ugly. Queso bowl ugly.

But, I think that's enough hand wringing for now. A win is a win is a win, and it was one in a hostile environment to boot. Northwestern is now 1-0 heading into a home opener against much easier Illinois State team. Let's start a streak!