Penn State: Takeaways from Base Camp

Share All sharing options for: Penn State: Takeaways from Base Camp

This Saturday, the Penn State Nittany Lions will attempt college football's version of summiting Mount Everest: beating the defending national champion, #1-ranked Alabama Crimson Tide at home under the lights.  Before a climber can even attempt the heights of Everest, however, they first have to prepare for the journey.  A huge hurdle towards making the trek is just making it through base camp.  The name may not sound very intimidating, but make no mistake - at almost 18,000 feet above sea level, many climbers' assault on the summit ends right there.  Climbers' bodies are forced to acclimitize to the heights, and they get a chance to see what exotic maladies are going to begin to strike them as they begin the trip to the top.  What does it look like?

Yikes.  While the Youngstown State Penguins did not pose quite the same challenge as Everest Base Camp does, the game did give us fans a first real chance to see this Penn State team in action.  We now have a pretty good idea of what the Lions' strengths and weaknesses will be when they make their attempt on the summit this weekend.

Going in to Saturday's game vs. Youngstown State, it's fair to say we were expecting a strong defensive effort, a solid run game, and somewhat of a rollercoaster at the QB position. We were hoping for an improved special teams effort and a clear leader to come forward at QB. 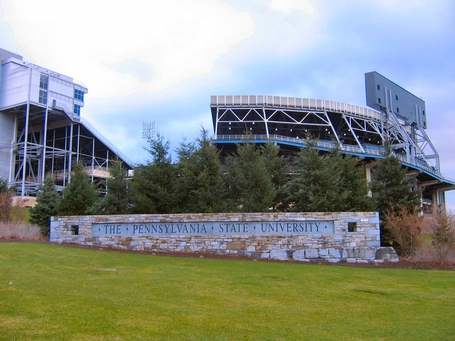 Passing - Maybe you heard, but Robert Bolden looked really good.  Everybody but Joe Paterno is convinced that he's locked up the starter position.  The kid throws darts.  His one interception wasn't too ugly, as the receiver fell down running his route, leaving the defender alone where the ball was suppose to go (and, obviously, did go).  When he missed receivers along the sideline he missed them to the outside; when he missed targets downfield he missed long.  All of this was facilitated by the fact that the offensive line did a great job pass blocking.  Brett Brackett had a career day, giving the Nittany Lions another credible receiving threat and another thing for the Tide to gameplan heading into this weekend's showdown.  Justin Brown showed some good hands on special teams and some solid downfield blocking.  Add in Moye and Zug and Bolden has plenty of options.  With the caveat that it was the FCS Penguins, it looks like our passing game may be pretty legitimate this year.  Panic over passing game: abated.

Running - Panic over running game: commenced.  Oh boy.  First: the offensive line could not run block.  There is no excuse for Penn State's talent not to be able to push an FCS team all over the place.  We saw this same problem last year in the nonconference schedule, but we don't have the first third of the season to figure it out this time.

Second: Evan Royster.  I've read a ton of criticism of Royster over the last few days.  Fight On State has basically come to the consensus that he just isn't good.  Whoa.  My take is that Royster's style revolves around his "patience."  By patience, I mean he moves to the hole and then sort of rides his first block, waiting a second for a lane to develop, then makes his move.  This style requires good blocking to create lanes which he is well-suited to take advantage of.  In 2008 it was a perfect combination.  In 2009 it didn't work quite as well.  If our blocking continues to struggle in 2010, it probably won't work too well again.  I don't think it has anything to do with the weight he put on this summer.  With competent blocking Royster provides us with the biggest upside.  With bad blocking, we may see more success with Stephon Green, who quickly moves through the hole, makes one quick decision, and barrels forward.  Regardless,any controversy regarding which RB should get the most touches is probably a waste of breath/ink/electricity (pixels?).  Paterno is going to reward Royster's loyalty with touches and he is going to get the all-time record.  Royster is today, Redd is tomorrow, and hopefully Green gets his inbetween the two.

We were thinking the defensive line was going to be a big strength this year.  We're not there yet.  I thought the line got good penetration but the tackling was subpar.  The defensive ends are going to have to be better by the time we get to the Big Ten schedule.  On the inside Devon Still is not Odrick, but Ollie Ogbu is underrated too.  The linebackers were pretty solid, and Colasanti in particular played really well, but they aren't big time playmakers (yet).  Neither of those two units hit the ground running on the level that we saw last season, but then again I don't think it was reasonable to expect they would.  Both units still have a lot of potential and hopefully will show marked improvement week-to-week.  If you take away the one Rocket Screen, I like what I saw from the Secondary, particularly in the run.  The problem - you can't take away 80-yard TD plays.  The defense as a whole has work to do.  There is a lot of talent and potential there, though, and coupled with great coaches I believe they will end the season as a top-15 unit.  How big a move in that direction they can make in one week's time is anyone's guess.

You have to be happy with what you saw.  Wagner was nailing 40+ yard field goals.  Fera was shelling kickoffs, and his one punt was a 45-yarder.  Powell opened the second half with a 100-yard kickoff return.  The coaches changed up the punting scheme to add some beef in the protection.  You can't give Special Teams anything other than an "A" for the performance Saturday.  We looked better in all phases than we did at any point last season.  Caveat, again, that it was an FCS opponent, but so far so good great.

Base Camp is in our rearview mirror.  For the most part, this mountaineer is in good enough shape to make a competent attempt on college football's highest peak.  Somehow we are going to start a true freshmen under the lights in Tuscaloosa and it is the run game that is the glaring issue.  I'm not putting money on Penn State coming away with the win, but I don't think a 3-TD loss is a foregone conclusion like a lot of others are predicting.  Anything can happen in college football, and Penn State will field a good enough team that, with the right breaks, they can be in striking distance of a victory.

On another note: yours truly will be attending the game this weekend.  Any pro tips you may have about a trip to Tuscaloosa, particularly regarding the tailgating situation, would be very much welcome in the comments.  Look for an article detailing the trip to get posted next week.