First off, Happy New Year.  Secondly, like most of you, I too have a splitting headache, so there will be no all caps posts this morning.  Let's type with our inside voices today, shall we?  At least until the the second half of the Gator Bowl.  Uff da, what a night.

Now, the important stuff.  It's the best singular day on the college football calendar, as we get marquee matchups from the time you wake up, possibly with no recollection of what happened the night prior (and that might not be a bad thing) until late into the night.  While you're nursing yourself back to health, you're welcome to spend the day with us here at OTE.  It's the Big Ten all day long, as five of the remaining 6 bowl teams in the Empire take to the field.  Illinois and Iowa got things started out with impressive wins of their own, and set the blueprint for the rest of the conference to follow:  we run off tackle better than anyone, so do it until someone stops you. You can check out the Insight recap here, and the Illini curbstomping of the Bad News Baylor Bears here. 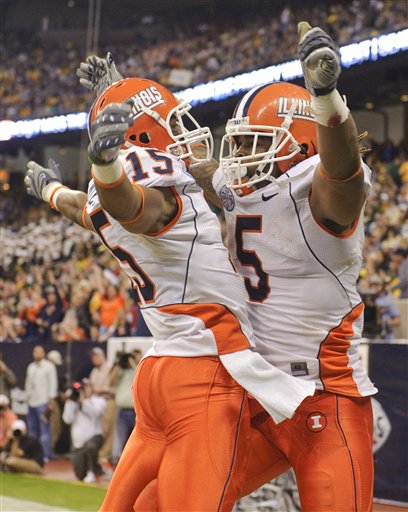 Oh, and someone totally called the Mikel Leshoure performance before it happened.

The only game that doesn't include a Big Ten team is the last one of the draw, the Tostito's Fiesta Bowl.  The Big Ten is an underdog in every game, and some of these point spreads almost beg a wager to be placed on it, if you're so inclined.  There's leftover turkey in the 'fridge, some beer out on the back deck, and we'll make some wings later on, if my stomach is feeling it.  And we'll break out victory cigars as required.

So just curl up in front of your computer and TV and don't even bother to change out of what you slept in, unless it's your clothing from last night.  Then you really should, because that's gross.

And somebody please get me some aspirin and Hair of the Dog.  Quietly.