Share All sharing options for: So we beat on... 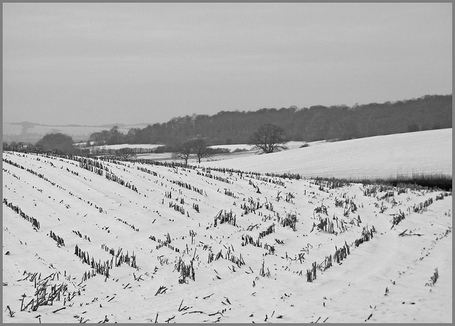 A colorless void of impatience, speculation, and hope.

For two straight years I've prefaced my first post after the end of the college football season with these words.  It's a tradition I'll continue for as long as I'm allowed to share my thoughts in this forum.

The first time I wrote them, I was feeling the pain of withdrawal.  A emptiness that was compounded by Ohio State's third consecutive loss on the BCS stage.  Last year, it was the opposite -- an endearing farewell, after the Buckeyes' 26-17 victory over Oregon in the Rose Bowl.  At the time, with the seismic rumors of Big Ten expansion sending tremors throughout the college football landscape and the pieces for a National Title run in place in Columbus I couldn't help but be excited for the future.  In the end, the BCS conferences didn't completely erupt, but there were enough shockwaves to keep us on the edge of our seats through Fall Camp.

This year there's no expansion talk.  But there are still plenty of reasons to keep reading Off Tackle Empire for the next eight months.

I've said it before and I'll say it again.  This is when we do our best work.  Seriously.  We're a better blog from January through August than from September to December.  That's because we're no longer under pressure to keep up with a constant stream of information.  Instead, we have time to process.

This is when we can really dig in.  As beat writers turn their attention to "other" sports, we're here to pick up the slack, leafing through almanacs, rewinding the tape, and spending hours reflecting on what was and what might be.

This is my plea to you to stay plugged in.  Our community is almost 1,500 members strong -- and it's one of the brightest and most unique in the blogosphere because we legitimately enjoy the patronage of fans from all eleven -- soon to be twelve -- Big Ten schools.

And man do we already have a ton to write about.  There's Michigan's surprise hiring of San Diego State's Brady Hoke, Jim Delaney's "reconsideration" of division names, and Nebraska's official entry into the Conference in July.

Not to mention our 2010 "Memorable Milestones" Season Recap, or three month long comprehensive team preview series, Big Ten // 2011, that will begin this spring.

The bottom line is we're not going anywhere, and we hope you don't either.

Over the next several months we'll be adding new writers, expanding the conference footprint, and doing everything we can to continue to be The Quintessential Big Ten Smoking Room.

So sit back, relax, and light up a good cigar.  It's gonna be great.