Hoke is a good hire for Meech. There, I said it.

Share All sharing options for: Hoke is a good hire for Meech. There, I said it.

Michigan fans are freaking out. My favorite response is a tweet from a friend that goes "You don't fire Rich Rodriguez to hire Brady f-ing Hoke!" Who is this guy anyway? Did Michigan really hire a guy with a 47-50 career record to be their next head coach? 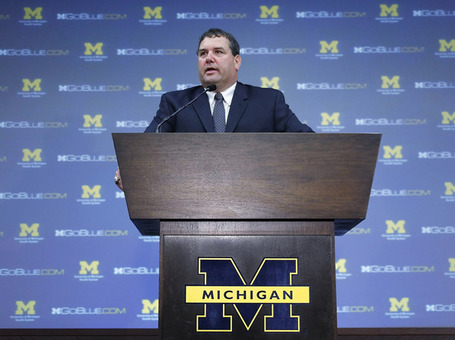 Dave Brandon now looks like he has led the biggest botched coaching search in America. However, I don't really think so.

"Well it looks like Michigan settled for their fifth choice," you hear a lot of fans say. Well, that's not entirely true, actually. You'd probably be surprised to know that Hoke is the only man to whom Brandon offered the Michigan job. Not Les Miles. In Brandon's address to the team, per MGoBlog:

It is also worth noting that Les Miles also wasn't offered the job in 2007 either, according to John U. Bacon's recent article in the Wall Street Journal. In fact, he was never even contacted about it.

This gives us a little insight into Dave Brandon's criteria for picking the next head coach at Michigan, and I think it's pretty sound.

From Rich Rodriguez's three years at Michigan, it's clear that the Michigan fanbase holds the tenets of Bo Schembechler's "Michigan Man"  in very high regard, to say the least. As Dave Brandon put it in his press conference:

We’ve been divided to a large extent. We continue to be divided based on all the various inputs and opinions that I get. And, clearly if we want to be successful, if we want to be successful as a football program, as an athletic department, and we want our university to really represent what we’re all about... what clearly is important is that whoever it has a clear understanding of what Michigan is all about. And, this is a unique place. It creates unique challenges, it also provides unique opportunities, and what I know and believe is that whoever comes into this job has to understand that clearly and be well suited for it.

From a fan's perspective, Rich Rodriguez didn't attempt to "get" what Michigan is all about, a dangerous move with such a demanding, (occasionally unreasonable), self-entitled and tradition-obsessed fanbase that are Michigan fans. Rich Rodriguez was very focused on coming into Michigan and "doing what [he's] always done." And it's what ultimately led to his undoing.

There were early signs of this reticence to cater to the Michigan fanbase, starting with his stubborn unwillingness to adapt his offense to the personnel available, or promising the #1 jersey to JT Floyd (that number has a scholarship attached and it must be earned). He was a hired gun, an offensive wizard. Unfortunately, that gun misfired terribly.

It's an epic understatement to say that Rodriguez did not have unanimous fan support.

Thus, priority #1 for Dave Brandon was to reunite the fractured fanbase, to bring Michigan football back to what made it so good in the first place. A large part of his criteria was a coach who would put Michigan first, one who knows Michigan inside and out and what makes it a unique place. The only way to do that was to go with somebody from inside the program, from which the available talent pool is fairly limited.

This is a safe move by Dave Brandon. A very safe move. And though fans are harping on Brandon for waiting so long to conduct his coaching search, I don't think the outcome would have been any different if he cad conducted this search in early December. Maybe a few more gains in the recruiting class, but for the most part it appears that the current players are satisfied and the recruits aren't really going anywhere.

When all is said and done, Brady Hoke may very well simply be our transition coach. From his track record it doesn't appear that Hoke is exceptional, but the truth is that nobody can really tell. His revitalizations of San Diego State University and Ball State are admirable, and the turnarounds, albeit in mediocre conferences, are impressive. However, I withhold judgement until I'm able to see what he can do on the field. But, truth be told, I'm hoping for a goddamn miracle.

What I can say is THANK F-ING GOD WE HAVE A COACH WHO CARES ABOUT DEFENSE AGAIN. Watching Michigan teams without defenses are like summer days without sunshine. That is enough for me, for now at least.

I leave you with a quote from Brian Griese, which I think sums up the issue nicely:

Brady Hoke, to me, signifies character, integrity and hard work, and I believe these are the attributes upon which Michigan was built. Coach Hoke understands and respects the proud tradition of Michigan and will galvanize the Michigan family. I know that Coach Hoke believes that a renewed emphasis on the development of "Michigan Men" is what will ultimately lead to a more competitive team at Michigan Stadium.