Because if college football isn't actually being played for 8...months...we might as well discuss the previous four months while they're still fresh in our minds!

How'd I pick these five games? I looked at a few things. What circumstances were they played in? Was there national attention on the game? Were there any highlights that won't soon be forgotten? Did the game kill any preconceived notions we had about either team...or back those notions up?

Forgive me for leaving out Michigan State knocking off Wisky, Minnesota beating on Iowa, Michigan State surviving Purdue, Purdue running over (literally) NW...can't have everything in this world. By the way, go find OTE on Facebook here and "like" us. Because life...is just part of a social network. By the way again, I'm rewatching the Rose Bowl and CAN SOMEONE PLEASE TELL ME why the TCU linebacker has three bicep bands on each arm??!

In unrelated news, looks like the Big Ten is sticking with Legends and Leaders...

I was golfing this morning in a light drizzle and my Blackberry kept telling me that MSU had zero points and Northwestern was building a big lead. It's not like I doubted the Wildcats, especially with Dan Persa, but I just figured my phone's scoring ap had frozen or been maimed by the rain. Once I got off the course, I found that my phone was working just fine and NW was putting it on the undefeated Spartans at Ryan Field. That would be the undefeated and ranked 8th in the nation Spartans, by the way. Dan Persa was doing Dan Persa things and Sparty was on the ropes! That is, until Kirk Cousins began zipping the ball through the Chicago wind and his receivers started making ridiculous catches. There were so many moments when State should have lost this game, so many third downs they converted late in this game, that I felt maybe, just maybe, State was a team of destiny...until they lost to Iowa the next week, murdering their BCS chances. Oh well, it was good while it lasted.

The second quarter was worth the price of admission, but I guess the multiple overtimes and back and forth nature of the game was cool too. Just remember - Michigan was on a three game skid and it was looking like curtains for RichRod, not to mention Michigan's bowl hopes. So a Wolverine score on the first play from scrimmage made me feel like it was Blue's day. Seven second quarter touchdowns, including the Junior Hemingway rain dance score, made me feel like it was anybody's game. Then Denard got injured and Forcier came in to fumble away the first snap, leaving me and all the fans on the 40 yard line in misery. Forcier's subsequent leading of scoring drive after scoring drive gave Michigan a win, but I do admit: I've never been pulled in so many directions during a football game. We smoked cigars at Smokies in Ann Arbor afterwards and all was right in the world... 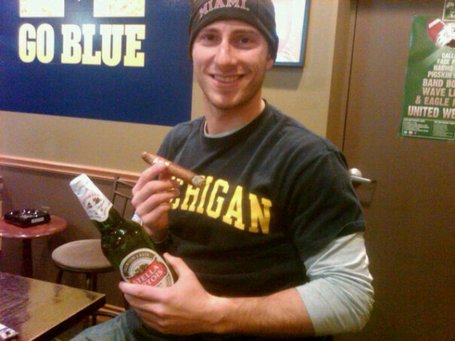 I have to think there are parallels to what Dan Persa did on the game winning touchdown throw. Maybe like, hitting a match-ending forehand winner and breaking your strings. Or dunking the ball to win a game and shattering the backboard. Of course neither of those involves something in your leg popping while knocking you out for the year. So that sucks.

The stakes for this game were huge. Huge. Iowa was still in the running for a Big Ten title and a BCS bowl bid, riding a two game win streak. Northwestern was riding a two game win streak...over Iowa that is. Stanzi threw an unconscionable late pick, the Wildcats scored late on that sideline route...And Pat Fitzgerald did what he could to murder the JNW nickname. Now I understand what JNW exists for - "it doesn't matter if they win or lose, it's still just Northwestern, it's still a small and apathetic fanbase, it's still a half empty Ryan Field." But when you beat the originators of the nickname three times in a row in heartbreaking fashion, the moniker loses most of its luster.

Familiar story now - Strong Badger Badger start, somewhat vicious OSU comeback, some late ass-kicking by the Wisconsin offensive line, a very nice playaction throw by Tolzien EQUALS No more Nat'l Title hopes for the Buckeyes. The kickoff return for a touch was clutch, letting everyone know that TP and the Bucks had walked into a buzzsaw. 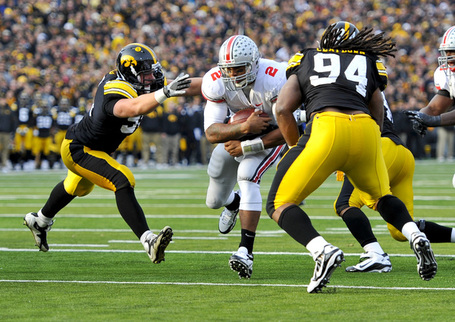