Share All sharing options for: Big Ten Fail 2011: Are We Still Who We Thought We Were?

I'm writing this from a bar. Literally. And I'm not on my computer. I'm doing it old school -- a pen, paper, and an iPhone. Oh and a giant cup of Leine's. It might be before noon, but I have to do something to dull the pain of yesterday. Ugh. Yesterday. It's almost too bad for words. Almost. Fortunately for you all, I'm kind of verbose.

Five games. One heartbreaking loss (Wisky), one sort of expected but still damn depressing loss (Northwestern), one really I mean REALLY? loss (Penn State), and two "I don't think I've ever seen a state with that much FAIL" losses (mitten state teams). 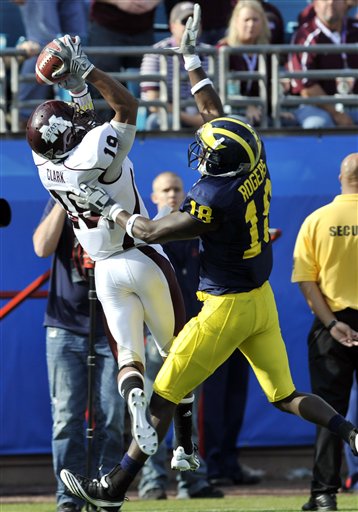 That about sums it up. Well, sort of... And after the "I" teams started things off so well. This was supposed to be our breakout year. After last year's 4-3 bowl resurgance when everyone said we were too slow, we had a hugely thrilling regular season. Electric quaterbacks and power run games. A three way race to the end. Upsets galore (both the expected -- Northwestern over Iowa again, and the unexpected -- Wisconsin over Ohio State and Sparty over everyone but Iowa). What on earth happened?

It's true of course that we drew some tough games. Playing Alabama, even in a down year, is never easy. And the well-known flaws in Northwestern and Michigan made match-ups against Texas Tech and Mississippi State anxiety inducing. And of course, none of us really knew what to expect from TCU. But I think the real problem was an across the board appearance of a lack of preparation.

Northwestern looked completely flat for about 75% of their game. Four weeks is obviously not enough time to recruit a defense, but the Wolverines looked down right shellshocked when the wheels started coming off. The same could be said of Matt McGloin and the Penn State offense. And Michigan State. Good lord Michigan State. Yeah, things started out okay, but it was almost like they gave up at 14-0. I feel like I've never seen a team come out less motivated to be there. Maybe that's harsh -- there certainly is a talent gap between the two teams -- but, if the Spartans wanted to argue for a BCS bid, they didn't exactly put on an impressive performance. Then there was the Rose Bowl.

As a Badger fan, I think this hurt the most. (Yes, I am also a Wildcats fan but Bucky has been near and dear to my heart for far longer. Plus at this point I almost expect bowl futility from Northwestern.) This was a mixture of over and under preparation. The Badgers looked under prepared in the basics -- tackling, catching passes, and not getting confused by zone reads. And while TCU had almost no run game going, the secondary, always a question mark for the Badgers, looked vintage Michigan State-game against Andy Dalton.

And then there was the over preparedness. The big question going into this game was how TCU's "best" defensive line (who relies on speed rather than size) would be able to handle Wisconsin's bruising rushing backs and an o-line with an average of 50 lbs and 3 inches on them. Perhaps out of reaction to this, or a fear of being defined as one dimensional, Paul Chryst drew up an offensive game plan that relied all together too much on the pass. That's fine as a plan, I guess, but what I don't understand, what I will never understand, is why when it became so clear that TCU couldn't actually handle our run game, we didn't throw the damn plan out the window and stick to what was working. This was, after all, the team that threw once in the 2nd half against the Wildcats when it was shown they couldn't handle the run. Where was THAT game plan in the Rose Bowl??

And the 2-pt conversion. Oh the conversion. Optimists will point out that the play worked. That, had "Mr. Armbands" the linebacker not made the save of the game, our wide open TE would have caught the game tying pass. But I would like to point out that had we lined up given the ball to John Clay or the extremely effective Montee Ball and failed, nobody would now be asking, "Gee, why didn't we lineup in the shotgun and try to pass it in?" 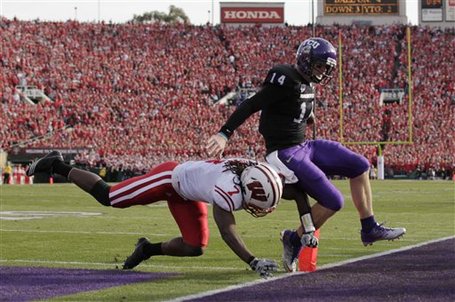 And that just about sums up the entire game. Wisconsin stopped being Wisconsin just long enough to break their fans' hearts and leave everyone else scratching their heads.

So what are the implications of this shit show? Well, regardless of the result in the Ohio State game, expect the media theme of SEEEEC dominance and Big Ten capitulation to continue. I also anticipate that our teams will suffer some ratings lag next season because of today. And, if Delaney and the conference don't do away with "leaders" and "legends," expect a ton of mockery to be heaved our way. Finally, I wouldn't be surprised if there are coaching changes before spring ball starts. Rich Rod might be gone, and there might be new coordinators or position coaches at Northwestern, Michigan State, Wisconsin, and maybe even Penn State (though I think they and the Badgers are the least likely). I never thought I'd say this, but at least we still have basketball season..