Last year, we profiled the biggest games, best wins, worse losses and biggest moments of the Big Ten season, month by month.  In that spirit, let's travel back to September 1st.  The trees are green.  The grass is brown.  And every team is unbeaten.  For now... 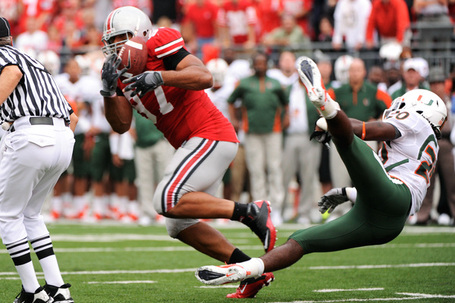 For 288 pound Cameron Heyward, returning an interception 80 yards is taking it to the house.

It was billed as a rematch of the 2002 National Championship Game.  But although the Hurricanes huffed and puffed in the week leading up to the matchup, in the end they just blew.  Terrelle Pryor was marginal in the air (12 of 27 for 233 yards), but (in a theme that would continue throughout the season) his 113 yard performance on the ground carried the day.  Despite managing almost no offense in the first two quarters of play, Miami entered the second half trailing only by 9 points, thanks to two -- count 'em -- two special teams blunders by the Buckeyes.  Jacory Harris and the Hurricane offense drove to the Ohio State 6 yard line, but threw away an opportunity to bring the game to within a score when defensive end Cameron Heyward unexpectedly dropped into coverage.  The 80 yard interception was the biggest takeaway of the regular season for the Bucks -- and might have been the biggest of the year, if not for Solomon Thomas' pick on the very same blitz with under a minute to play in the Sugar Bowl.

Jacory Harris' four interceptions showed he wasn't the Heisman contender everyone thought he was.  Miami's lame offensive effort showed the 'Canes weren't the elite team we thought they could be. 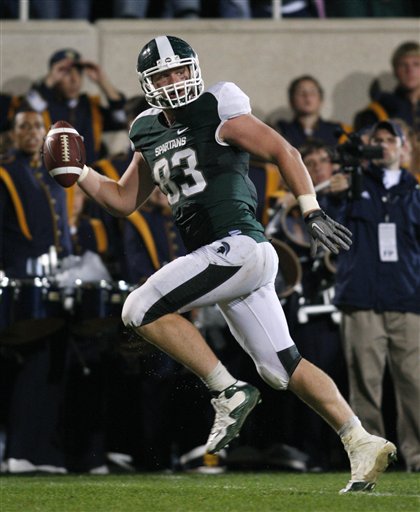 Charlie Gantt wasn't Aaron Bate's first choice, but he was the right one.

It's been labeled the "call of the year."  And rightfully so.  Down 28-31 in overtime with seconds ticking on the play clock, Mark Dantonio opted to forego a 46-yard field goal in favor of a fake he called "Little Giants."  The Spartans barely got off the snap, but Holder Aaron Bates stood up, surveyed the field, and found Charlie Gantt uncovered.  The 29-yard touchdown pass gave Michigan State a 34-31 win, a 3-0 start, and their third victory over the Irish in four years.  It also gave Mark Dantonio a mild heart attack.  The coach would miss the next two games while recovering.

The Spartans rode the momentum of the gutsy finish to an 8-0 start.

I almost picked No. 9 Iowa's loss at No. 24 Arizona for this spot.  After all, Iowa's desert debacle knocked them out of the national championship picture for good.  Then I remembered Minnesota's embarrassing fall to an FCS opponent for the second time in three seasons.  The Coyotes took a 7-3 lead in the first quarter and never looked back.  Dante Warren might as well have been Brett Farve.  The Junior quarterback passed for 352 yards and three touchdowns and rushed for a 25-yard score on a must convert 4th and 1 midway through the fourth quarter to seal Tim Brewster's fate.

And as if the embarrassment of being bested by a lower division opponent on their home turf wasn't enough, Brewster later posted highlights from the game on his personal website, conveniently omitting the part where the Golden Gophers let the Coyotes score at will.

Optimism is one thing.  Propaganda is another. 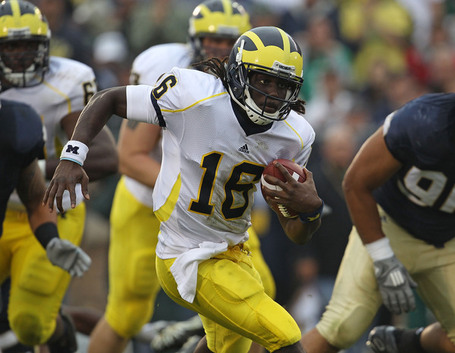 Denard Robinson was a runaway Heisman favorite in September.

This is the second appearance by the Irish in our milestones series, and like the first, fans in South Bend won't be too pleased about the shout out.  On September 11th, Michigan took to the road to play Notre Dame.  Both teams were hoping to build off successful season openers.  The Wolverines got their wish.  Sophomore sensation Denard Robinson single-handedly exploded for 502 yards, including 258 yards rushing on 28 carries and 244 more passing.  He also directed the game winning touchdown drive, although the month's biggest moment occurred in the first half, when Robinson shot through a gap in the Irish line and sprinted 87 yards unscathed to the endzone.

It was the longest run in the 73 year history of Notre Dame Stadium.