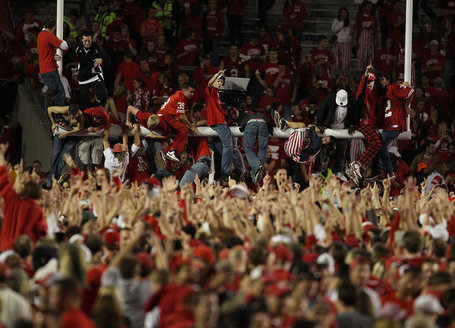 It was a big month for Bucky.

For the second year in a row we're revisiting the season that was one month at a time.  If you haven't already, take a look at the moments that made September memorable.  Now let's turn to the heart of the storm.  The air is getting cool at night. Green leaves have begun their gradual transition into orange.  The first frost of the season isn't far away.  The conference season is about to begin.

Six Big Ten teams entered October undefeated.  Sure, you know Ohio State, Wisconsin, and Michigan State.  And you might recall Michigan's spectacular surge out of the gate.  But can you guess the other two?  Go ahead.  Take a minute.

If you picked Northwestern and Indiana, you're correct.  You're also probably a little surprised.  Don't be.  October is where we separate contenders from pretenders.  It's also when many college football fans get their first taste of heartache.

I was at Camp Randall in 2008 when freshman Terrelle Pryor stepped into manhood with a 12 play 80 yard drive that cemented a 20-17 victory.  I should have never gone back.  David Gilreath returned the opening kickoff 97 yards for a touchdown, and Wisky stormed out to a 21-0 lead before the previously impenetrable Buckeye defense got its cleats on.  John Clay delivered on dive after dive, and the Badgers outgained the Buckeyes 197-93 in the first half.  Ohio State rallied to pull within 3 points at the beginning of the fourth quarter, but Wisconsin's James White answered, capping a complete effort from start to finish.

Just one week after upsetting the No. 1 team in the country for the first time since 1981, No. 13 Wisconsin traveled to Iowa City to meet a Top 20 Hawkeye outfit.  Many, including myself, questioned whether the Badgers would be able to get it up for a second week a row.  205 yards passing, two John Clay touchdowns, and a 100 percent fourth-down conversion rate later (3-3), Wisconsin escaped Kinnick Stadium with a 31-30 victory. 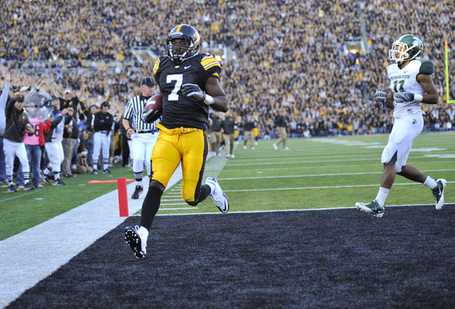 Michigan State may have been the league's Cinderella in 2010, but no loss left a worse taste in the mouth of pollsters and bowl-selection committees than the Spartan's embarrassing fall from grace in their second trip outside the state of Michigan.  The Spartan's hopes of extending an eight game winning streak evaporated after they gave up 37 uncontested points in a soft and disinterested effort.  Michigan State's only sign of a pulse came in the waning moments of the first quarter, when a 12 play, 44 yard drive was interrupted by an improvident Tyler Sash interception, that was promptly returned 66 yards to the house after a sick lateral to Micah Hyde. 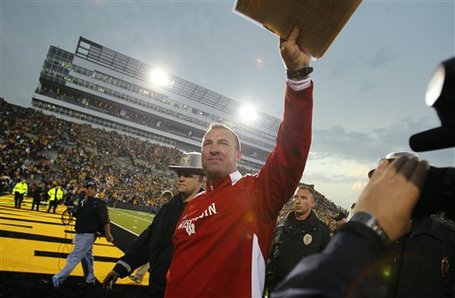 The card said to go for it.

Down 30-24 with a little over eight minutes remaining in the fourth quarter of its road matchup with Iowa, Wisconsin faced a 4th and 4 at its own 26 yard line.  When Iowa lined up in punt return coverage, Bret Bielema saw a weakness he'd seen on film, and decided to exploit it.  The stakes could not have been higher.  A turnover on downs would have given the Hawkeyes the ball in field goal range and the opportunity to put the game (and the Big Ten Championship) out of reach.