Player of the Year conversations are meaningless. You're absolutely right. But ladies and gentlemen of the OTE Community, what the hell else are you going to do for the next eight months? Not talk about college football? HA. Below are the voting results, the reasoning, and some discussion about why exactly the POY wasn't Denard Robinson. But without further discussion, the OTE 2010 Big Ten Player of the Year is: 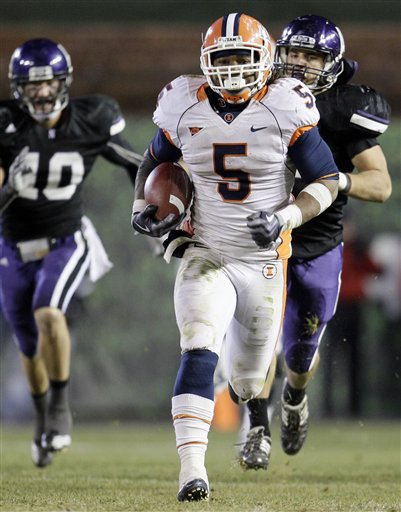 Because we lack a Cam Newton type figure who swept the voting, Leshoure's win will inspire some debate as to how you give the POY award to someone whose success hinged on a young quarterbacks' success in scaring defenses away from the line of scrimmage. Not only was Leshoure the most prodigious runner in the Big Ten, his story is also a good one. Character issues slowed progress early in his career and because the Illini really don't feature one back, it looked like Leshoure might just be another supremely talented player who didn't quite live up to expectations. But once the season got rolling and it became clear that Nathan Scheelhaase was going to be an offensive threat, Leshoure became a definite threat from week to week. His final five games (183 ypg, 11 TD) showed an NFL-ready RB who could overmatch college defenses with breakaway speed and a punishing running style.

During the preseason, we joked that Illinois didn't interest us enough to write articles about their football team. A youthful defense and inexperience at the quarterback position would surely net them 4 wins. Seven wins later, including a bowl game victory, you're looking at the biggest surprise in the Big Ten. The consistent presence of Leshoure surely helped that turnaround process; he never fumbled, never missed a game, and was never held below 14 carries in a game. I remember watching him turn the corner time and time again in Ann Arbor, falling forward or bowling over tacklers to finish runs.

But Graham, Denard Robinson won all the POY's from coaches and media members. Yeah, that's okay, I won't deny that he had an incredibly productive season. But how many games did he fail to make it through (the answer is 5)? How many times did you wish he wouldn't have thrown the ball into coverage? And how many times did the vaunted Run Spread fall apart early under Denard's watch only to be brought to life against shell defenses in the second half?

Anyways, my congratulations to Mikel Leshoure for playing himself into a probable 2nd Round Draft spot and for earning OTE's POY Award. The voting results are below...

Ted Glover..."Great individual season, came up huge against rival Northwestern, and just as clutch against Baylor in their bowl win.  Offense went through him, defenses knew it and tried to stop him and still couldn't.  Sole reason we'll have Ron Zook to kick around for a couple more years, and that, my friend, is literary gold."

Randy... "just meant way too much to his team for anyone to challenge his spot as the Big Ten's Player of the Year."

Ricardo..."I emphasize not just the big games, but the big moments. Looking back at Wisconsin's season, almost every big-time running play (irrespective of running back) was to Carimi's side (the clinching touchdown against Ohio State, the gut-check fourth-down conversion/TD at Iowa, the back-breaker at Michigan, and two big runs in the finale against Northwestern). He also racked up the awards: Consensus all-conference, conference lineman of the year, Outland winner, and consensus all-American. In the big match-ups, he completely shut down Cameron Heyward (when they were matched up), Ryan Kerrigan, and Adrian Claybourn. His blocking allowed two Wisconsin backs to grab second-team honors (White and Clay), one back to get Freshman of the Year (White), and gave Tolzien enough time to both win the Unitas Award and grab second-team honors himself (coaches' team)."