Well, that was...something.  I'm not going to try and sugarcoat what can't be sugarcoated--the New Year's Day debacle was a big kick in the nuts for the Empire.  What started off with such promise has lurched into the edge of disaster.  If Ohio State can beat Arkansas on Tuesday, the Big Ten bowl season can be characterized more as the Chosin Reservoir than the Little Bighorn, but an OSU loss makes this post season a debacle.  Oh, and Big Ten Commissioner Jim Delany will have to wear a Gen Custer outfit for Halloween. 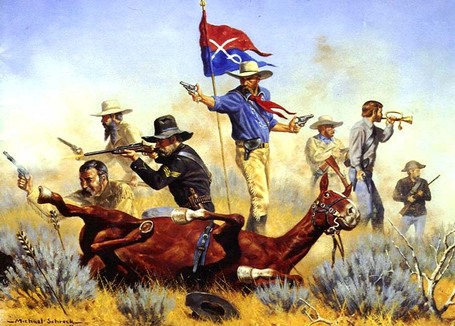 So, it all hinges on Ohio State.  Yeah, I'm nervous too.

I didn't expect a 5-0 day, but I didn't see the shutout coming either.  Yes, Big Ten teams were underdogs in every game, but I felt Penn State and Wisconsin, especially Wisconsin, would be able to carry the banner for us.

After the jump we'll sift through the rubble and try and make sense of why The Football Gods have forsaken us so.

TicketCity Bowl:  Northwestern 38, Texas Tech 45.  I give credit to Northwestern for making a game of this, because it would've been easy to just roll over after TT jumped out to a huge lead.  But they rallied, and got to within 7 in the second half, and after a pick-6 they had momentum and enough time to steal a win.  But the defense couldn't hold, they got down by 14 again, and there just wasn't enough time left for two scores.  At some point, and I don't know that you can call it this season because of the Dan Persa injury, Northwestern must take that next step, because a valiant loss in a bowl game is quickly becoming tiresome.  I appreciate the fact that the Wildcats made the game a lot closer than most people thought they would, but this is a storyline that has run it's course.

Capital One Bowl:  Alabama 49, Michigan State 7.  What was the feel good story of the year in the Big Ten turned into an SEC curbstomping.  There was a lot of caterwauling from Sparty fans at the end of the year that they deserved a BCS bowl, and they had what seemed to be a legitimate case.  After what Alabama did to them, maybe not so much.  The Crimson Tide scored TD's on their first five possessions and flat out kicked Michigan State's ass in every facet of the game.  I wasn't sure if MSU could beat Alabama, but I didn't see this coming at all.  Michigan State was clearly not prepared, and I think that's the most disappointing thing from all the games yesterday.  They were co-champions of a conference we thought was one of the best in the country going into Jan 1st, and they were routed by a somewhat down Alabama team.  But as bad as yesterday was, MSU under Mark Dantonio is headed in the right direction, and they have a bright future, although it's difficult to see through the rubble right now.  Buck up Sparty, and if I could, I'd like to give you words of encouragement from one Wayne Woodrow Hayes:  "There's nothing that cleanses your soul like getting the hell kicked out of you."  Uh, I declare you cleansed.  Now go forth, and we will speak of this no more.

Gator Bowl:  Miss. State 52, Michigan 14.  For UM, the latest and most recent cleansing might have cost Rich Rodriguez his job.  I just can't see him surviving this, can you?  And unfortunately, I did see this thumping coming from a mile away.  Michigan's defense was the worst of all the bowl teams, and Miss. State had their way all afternoon.  What started out so promising for Michigan in 2010 ended in disaster, and RichRod is now winless against Michigan State, winless against Ohio State, and was embarrassed in a bowl game.  In the second half, things were so bad that Rodriguez and Denard Robinson were yelling at each other on the sideline, and it seemed to me Rodriguez lost his team.  The Wolverine offense is explosive, but if you have a defense as athletic as they are, they can be shut down, and when combined with a defense that can't stop anything, it's a recipe for disaster against well rounded football teams.  Miss. State is, in fact, as well rounded as Beyonce's tukhus.

Outback Bowl:  Florida 37, Penn State 24.  This game was a lot closer than the final score would indicate, and it looked like Matt McGloin might actually bring the Nittany Lions back...right up until he threw his fifth interception, which was returned for the game clinching touchdown.  Here's a question I have:  If Robert Bolden is the future for Penn State, why didn't he play after McGloin's three interception first half?  I didn't read anyting about him being injured, and Bolden couldn't have been any worse than McGloin.  If he was injured, that's one thing.  But if he isn't, is Bolden not playing an indictment of him, or is McGloin actually the guy in Happy Valley?  Bolden seems to think it's McFive, because he has decided to seek a transfer.  Looks like the decision to not play Bolden will have bigger implications than just the outcome of the game.  Bad call by the Penn State coaching staff all the way around.

Rose Bowl:  TCU 21, Wisconsin 19.  As bad as the afternoon had been, it could have been somewhat salvaged had Wisconsin won the Rose Bowl.  They started off strong, but TCU answered everything Wisconsin had.  There's a lot of controversy as to whether or not the Badgers should have passed the ball on their two point conversion, but if you look at the replay the tight end ws WIDE open.  If the pass doesn't get deflected, it's good, and it's game on...but it shouldn't have gotten to that point.  Why did Wisconsin go away from a successful running game?  Just baffling.  A fantastic game by Montee Ball went for naught, and any repsect the Big Ten gained from last season's impressive bowl season and this regular season disappeared behind the San Gabriel mountains.

So, all we have left is Ohio State.  Despite all the drama surrounding Terrelle Pryor and the Tattoo 5, I like their chances, but the tattoo controversy and the 0 for all time against the SEC in a bowl have me worried.  A win will give the Big Ten somewhat of a lift and a wee bit of redemption, and will get the ohfer against the SEC off of Ohio State's back, but the New Year's Day Massacre of 2011 will resonate for a long, long time.

But for now, I leave you with the words of Ferdinand Foch, Supreme Allied Commander, WW I:

"My center is giving way, my right is in retreat.  Situation excellent. I am attacking.”

We attack on Tuesday, and we attack in 2011, because you can't spell Off Tackle without attack.