The Reign of Error

Share All sharing options for: The Reign of Error

I'm tempted to move Michigan back to the couch after their signing of Greg Robinson, but I won't go that far. You watch, there will be a game that they lose this year because his defense will play to soft in coverage in the 4th Quarter. He will defend the scheme by stating that it would have worked if the players executed properly. He will be wrong, of course. I lived in Kansas City during his reign of error, and watched his flailings in Austin and Syracuse. UM will regret this hire. 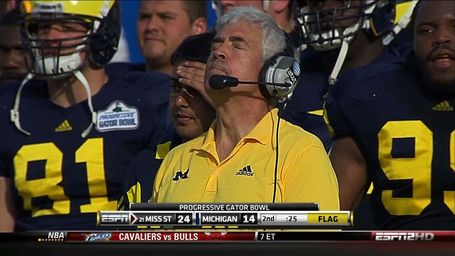 Godspeed, Greg Robinson. The Big Ten (outside of Ann Arbor) will miss you.