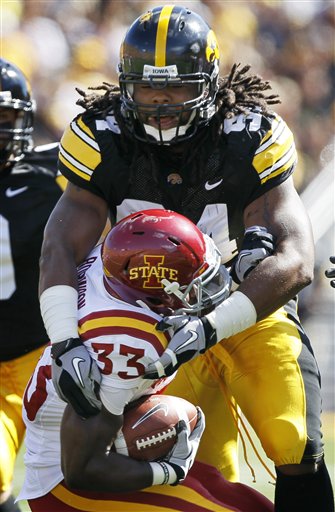 Weaknesses: Questions about dedication to the weightroom, conditioning issues

Discussion: Clayborn has been anointed a first round draft pick ever since he bashed Big Ten defensive lines in 2009. And no one will forget the dominating performance against Georgia Tech when he picked up something like 10 tackles in one half and showed the futility of trying to block him with one person. 2010, when he surprisingly returned, wasn't as much of a highlight filled trip, but that's thanks to a combination of factors. 1) He saw more double teams and chip blocks from opposing teams, 2) the Iowa 4-3 left him pass rushing late into fourth quarters, tiring him (and the rest of the Iowa D-Line) out. If it had been just Clayborn tired, I would question his conditioning even more. Since the entire line was sucking wind, I'm going to guess it was part scheme, part size issue (the Hawkeyes line averaged 280 lbs). Finally, some people questioned Clayborn's drop in production. That's just stupid - anyone who watched Iowa play this year saw him in the opposing teams' backfield just like 2009. He spent the entire Northwestern game in the backfield chasing Dan Persa and when Persa lobbed the game winning throw, guess who was in his face?

If you were drafting a team right now, would you take Clayborn based on his potential and his prototypical size, or say, Ryan Kerrigan, who people will inherently think is a harder worker and more driven? Clayborn would be my guy - Lots of star potential there. He's also big and active enough to play in a 4-3 or a 3-4 scheme.

As far as pure talent PLUS size goes, Clayborn is a first rounder. But teams will question him not playing in the Senior Bowl and his conditioning. Every Mock Draft has him in the first round, somewhere late in the teens. I will miss the dreads, I'll miss his contributions to Big Ten football, but it's intriguing players like Clayborn that make college football so damn fun.