Well, I guess we should have seen this coming. One last "worst" was the straw that broke the camel's back: following a 38-point shellacking by Mississippi State in the Gator Bowl (worst in school history, friends), Rich Rodriguez has been fired from Michigan.

The experiment is officially over. It failed. 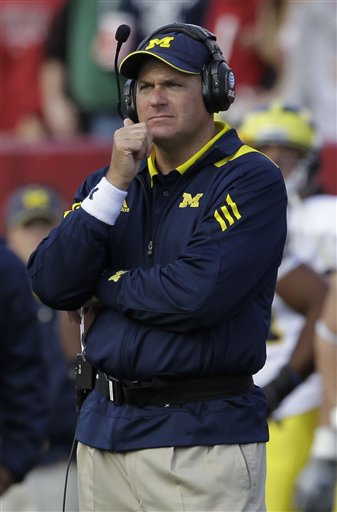 Hmmm...What am I going to do with my huge pile of money?

Looking back, it's fairly easy to say that this wasn't exactly a match made in heaven. From the very moment he was named head coach of the Wolverines (and the inauspicious WVU buyout fiasco), Rodriguez has been embattled. Maybe it's his aw-shucks country boy demeanor that rubbed the fanbase the wrong way (look, our helmets got wings!), maybe it was the cursing in practice, or perhaps it's his fondness for Josh Groban. Or maybe all three. But despite all the internal turmoil--the frivolous practicegate allegations, star recruits not qualifying, etc--the fact is that Rodriguez couldn't deliver on the field: 6-18 in the Big Ten, 2-11 against ranked teams. For the winningest program of all time, that doesn't cut it.

And thus the "I told you so's" begin to pipe up, claiming that they knew the spread could never cut it in the Big Ten. But is that really the case?

Why did Rodriguez fail at Michigan?

Rodriguez was brought to Michigan for his innovative spread offense. The results this year speak for themselves: 6th in the nation in yards/game, Denard Robinson Big Ten Offensive Player of the year, Silver Football as the Big Ten's most valuable player, school records shattered left and right, etc... The offense worked, and it worked very well. The spread-offense wasn't the problem.

But even in this fancy pants spread offense era of teams putting up gaudy numbers, Rodriguez did prove one thing: no matter how good your offense is, you still need a defense and special teams to win.

In a sad twist of Michigan football-hating irony, it wasn't Rodriguez's offense that got him canned, but his defense (or lack thereof).

Let's take a look at the numbers, shall we? (Via ESPN stats and info)

After 3 years at the helm, only 1/3 of this team worked. The other 2/3rds (some may call that a "majority") of this team withered into nothingness. Michigan's field goal percentage was... wait for it... 28.6% (4 of 14). We made 4 field goals all year. Attempts look a little low? That's because Michigan had to either punt or go for it on 4th down if they were outside the, oh I dunno, 15 yard line.

One thing I think is fairly clear: Rodriguez was not fired because of the spread. Maybe the manifestation of fans' resistance to change that was embodied in the spread (resulting in self-hating Michigan alumni like Free Press columnist Michael Rosenberg of Practicegate fame). But certainly not the spread itself. It actually done worked pretty darn good.

As a good friend of mine (and fervent Notre Dame, ie Michigan-loathing, fan) put it, Rodriguez's legacy at Michigan will be that he made a lot of money and drove a historic power into the ground. I had, nor do I have, an appropriate response other than to sob hysterically.