Southern Comfort - A Buckeye Goes to the Big Easy

Share All sharing options for: Southern Comfort - A Buckeye Goes to the Big Easy 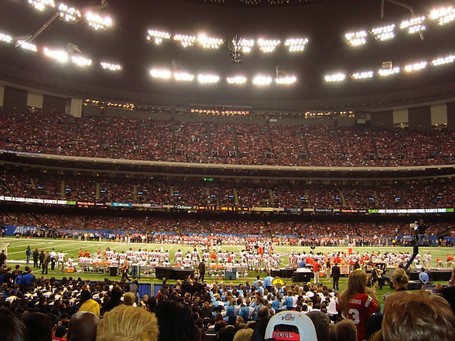 My view for the 77th Annual Sugar Bowl

I've been fortunate to follow the Buckeyes to a number of postseason destinations, but despite three trips to Phoenix (2005 & 2008 Fiesta Bowls, 2006 BCS National Championship Game), and two pilgrimages to Pasadena (1997 & 2009 Rose Bowls), Tuesday marked my first trip to the Big Easy.  (In case you're wondering, I was forced to sit out the 2007 BCS National Championship Game because it was my first year of law school and law school is the place that fun goes to die).

We left Columbus early Sunday morning for the thirteen and a half hour drive to New Orleans.  I insisted on stopping for lunch in Nashville, where a quick detour off the freeway brought us to Jack's Barbeque -- Music City's "pit to plate" specialists since 1976.  There's nothing like merging into four lanes of traffic with a Styrofoam tray loaded with pulled pork, mac n' cheese, cinnamon apples and four open containers of sauce in your lap.  After much deliberation, everyone agreed that the Original Tennessee sauce -- with its tangy sweetness -- was the best.

We arrived in the Warehouse District a little after 9:00 p.m., and immediately headed for Mother's Restaurant.  Everyone who made the trip in 2007 swore by their blend of low country comfort food, and we considered the line that stretched around the block to be a good sign.  Inside the packed saloon we funneled up to the deli-style counter to place our order.  I opted for a Shrimp Po' Boy and an Abita red ale.  The sandwich that found its way to our table was huge -- a pile of grilled shrimp was laid out on two hulking slabs of french bread.  The bread, with its crusty edges and soft, doughy center turned out to be a staple of Creole cuisine.  I loved the spicy lemon marinade and hot peppers.

Although it was a chilly night we decided to take a quick tour through the French Quarter.  It was relatively quiet on the side streets and narrow brick alleyways, until we reached Bourbon Street.  As I waited to cross an intersection in front of a daiquiri bar I ran smack into former coach John Cooper and his wife.  It was there, in a sea of festivities that we were greeted with the most turbulent feature of the trip: The Hog Call.

For the unacquainted, calling the Hogs is an Arkansas' tradition, akin to our own O-H-I-O letters cheer -- only the ritual is longer and a bit more obnoxious.  It starts like a Voo Doo rite, with participants raising their arms from the knees to above the head while shrieking "Woo!"  At the top of the motion, the exorcism reaches full tenor, at which time fans clench and lower their fists, shouting "Pig Sooie!"

Then it repeats, two more times in eight second intervals before the faithful declare "Razorbacks!"

We heard it about a thousand times during our trip -- and if I'm being completely objective I'll admit it's one of the most original organized cheers I've ever heard.  Because of its length and pitch it absolutely overwhelms any competing salutations.  Then again, it's also one of the easiest greetings to mock -- and I later enjoyed watching triumphant Ohio State fans call the Hogs to slaughter after the game.

We ended the night at Cafe Du Monde, New Orleans' French coffee outpost.  This 24/7 landmark serves hot Cafe Au Lait, and fresh beignets (doughnuts) dripping in powered sugar.  The scalding hot beignets are literally to die for -- and after one visit, we made it a priority to end every night at the Cafe. 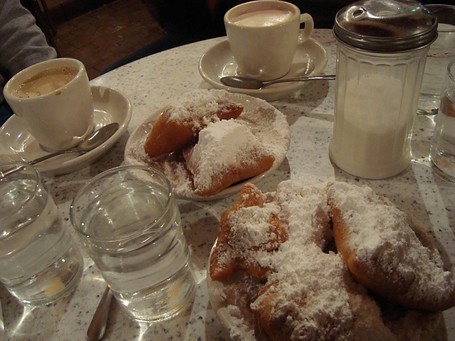 The morning of the game we took the Canal Streetcar over to the Garden District to tour Lafayette Cemetery and lunch at Commander's Palace.  The Palace, which has operated continuously since 1880, is a landmark for haute cuisine, and routinely appears on lists of the Top 50 Restaurants in the United States.  I was astounded to find they serve .25 cent cocktails the dining room, and quickly settled into a three course/three martini lunch.  I paired a dirty Ketel One pour with a rich bowl of Snapping Turtle soup (yes those chunks of lean protein are really Snapping Turtle), and a sweeter specialty martini with a bone in pork chop.  For dessert, we enjoyed a scrumptious strawberry shortcake. 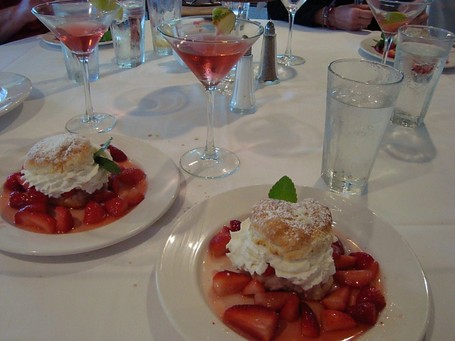 I almost fell asleep on the way home from the restaurant, but rallied in time to drink a few beers on the nine block walk to the Superdome.  If it wasn't abundantly clear before, it was by then that Buckeye fans were positively outnumbered (2 to 1) by our Arkansas counterparts.  This was the first time in six Ohio State bowl trips I've seen us out-traveled.  (Apparently the buzz of making their first BCS game brought fans en masse).

The Razorbacks weren't shy about making their presence known.  After a brave Buckeye welcomed a Hog-calling bunch to the BCS with a slight air of condescension, an Arkansas fan replied "Welcome to the SEC!"  In a Superdome bathroom, a group of Arkansas fans chanted "0-9" ad nauseum.  I decided against cautioning them on the risk of riding on the laurels of their conference brethren.  After all, you didn't hear me touting Wisconsin's 17-14 win in the 2006 Capital One Bowl.

We found our seats -- seventeenth row, forty yard line -- one row behind Daniel "Boom" Herron and DeVier Posey's parents, and settled into the concrete fortress.  I've been to a lot of major bowl venues, and I have to say that the Superdome is by far the most dated, sterile environment I've encountered.  For starters, the seats are literally 30 yards from the field, creating an awkward barrier between the fans and the action.  Additionally, half of the lower decks are shrouded beneath the upper decks, leaving a significant number of fans literally in the dark with a restricted view. 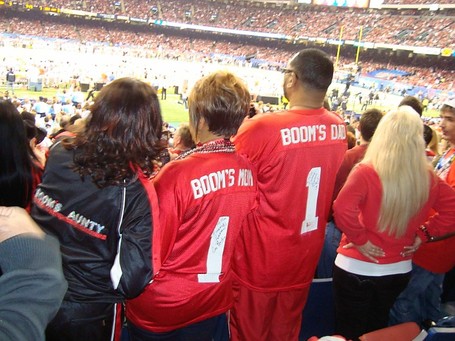 Talk about being in good company.

Thankfully our seats were in the open, but I couldn't help but long for the outdoor confines of the Rose Bowl or Sun Devil Stadium -- where the Fiesta Bowl used to be held.  If I had it my way college bowls would be played at college stadiums -- NFL opulence be damned.

Of course, after kickoff I largely forgot about the setting.  My thoughts on the game are as follows:

After the game we serenaded the expats with the famed "S-E-C" chant then walked over to Cafe Du Monde for a late night snack. 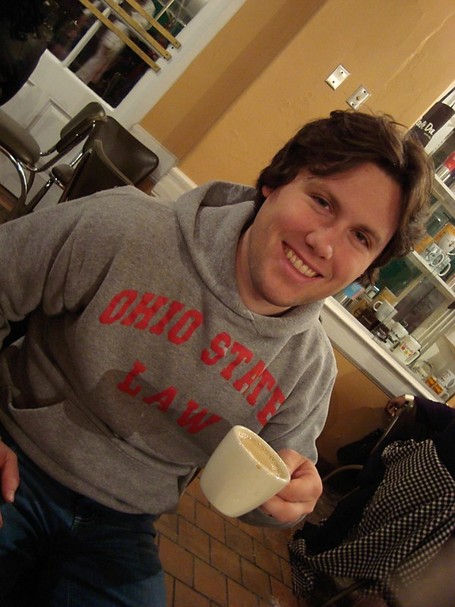 How sweet it is.

The next morning we left New Orleans.  I've never been so proud of a 1-9 record.