Share All sharing options for: Silver Linings in Bloomington

It's been a bad season for Indiana football. The losses are piling up and the dozens, maybe even hundreds, of Hoosier football fans are enduring a terrible season. Rather than force them to read about how bad things are, let's cheer up the IU faithful with some silver linings.

Cloud: Indiana has lost to a team from the MAC (Ball St.) and the Sun Belt (North Texas) already this season.

Silver Lining: Indiana defeated South Carolina St., their FCS foe, which didn't happen in 2006 when they lost to Southern Illinois.

Cloud: Indiana's defense has given up more total rushing yards (1592) than any FBS team this year.

Silver Lining: Indiana continues to properly "Defend the Rock". As far as I know, no one has ever stolen or vandalized the huge chunk of limestone that sits behind the north end zone.

Cloud: Indiana doesn't get to play Minnesota this season, who most consider the worst team in the Big Ten.

Silver Lining: The Hoosiers definitely won't prove the Minnesota-haters wrong by losing to the Gophers this year.

Cloud: Indiana doesn't have a unique name for their football stadium, even among Big Ten teams. Nebraska, Illinois and Indiana all play their home games at Memorial Stadium.

Silver Lining: The home of IU basketball has a much more unique name. Illinois is the only other conference team that plays in Assembly Hall.

Silver Lining: It was a significant improvement from last year's 83-20 drubbing.

Cloud: While the Hoosiers were in Texas losing to the Mean Green, injured running back Darius Willis was at a professional wresting event in Bloomington.

Silver Lining: Willis was healthy enough to help his wrestler friend PJB against his opponent Austin Manix. At least one Hoosier was involved in a victory that night.

Silver Lining: Indiana rushed for 223 yards against the Badgers, which is pretty good when taken out of the context of the game.

Cloud: IU football's season ticket slogan was "Win today.", which is on billboards all over the state. So far there has only been one day where this slogan has made sense.

Silver Lining: The Hoosier Lottery is thinking about buying the billboards and changing everything but the slogan. The athletic department will be able to recoup some of their costs.

Cloud: Indiana came back from 20 points down against Virginia to take an 8 point lead late in the game, but ended up losing the game by a field goal. 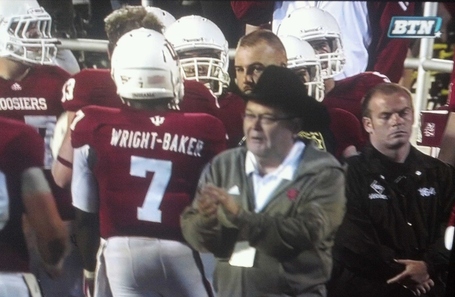