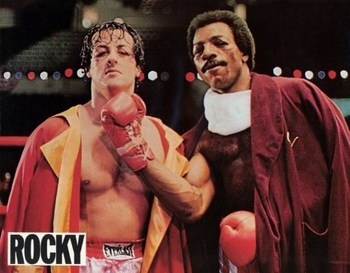 Sorry to go all Simmons-esque with the picture attached to this story but this was the image I had in mind after the conclusion of the game tonight.

Call it a draw, call it a toss up, call it a "hanging chad" if you must. After 59 minutes and 56 seconds MSU and UW were deadlocked. Each team kept taking the other teams best shot and kept getting back up off the mat for another go. If this game would have gone to overtime, it would seem only fair. I am biased to be sure, but I think the wrong call was made on the field and the right one was made in the booth, however I wouldn't have been surprised if they called it the exact opposite way (TD on the field, Short in the booth) and sent us to OT. It seems only fitting that it came down to a body twist, a matter of inches and a judgement call. On UW's previous series a judgement call decided that Wilson was not guilty of intentional grounding while commentators thought and replays appeared to show that he was inside the tackle box when he threw it out of bounds. It seems somewhat unfufilling (not the victory) that it ended the way it did. What did we learn?

MSU did not "steal" this game. Keep in mind that after taking the lead late in the second half, MSU never trailed again. The hail mary was to win the game to be certain, but an unsuccessful result to the play would have not meant a loss. Can we put to rest the notion that this MSU team is undeserving or lucky? UW may be maligned for dropping the inexplicable game when it is highly ranked with national expectations, but this was not 2005 14th ranked 5-0 UW waltzing into Evanston and losing to unranked 2-2 NU. The Spartans were ranked themselves.

While ND's loss to (a 5-1) USC does not help our cause, that is our sole blemish on the season. MSU has consistently held their opponents to below their seasonal averages in their contests. It was no mean feat to hold a UW team that came in averaging 50 points per game to 31. To score 37 against a defense that was allowing an average of 9.7. At some point it should stop being that Team XYZ didn't take advantage of what they were given and move to the fact that this is a very good MSU team. That their defense is something special. Notice I will not say that we are on par with LSU, UA or even OkSt., we still have much to prove. Heck, if we played this game 10 times or in Camp Randall the outcome might be very different. Still many would have predicted that during our October gauntlet we would go 1-3 or 2-2 at best, but here we are with a chance to go 3-1 at worst. In the past month MSU has beaten both of the other co-champs from last season. Maybe it doesn't make up for the slight we feel from being dispatched as canon fodder to an angry Alabama squad, but it certainly feels good to me.

There are a lot of football games left to be played. Hopefully the MSU players have learned their lesson about reading positive press clippings before a big road game. If there is any justice both teams will continue their march to Indy and we can try this again. Tonight's performance has left me more confident that if we play to our potential we have a very good chance to be the Legends representative in the inaugural championship game.