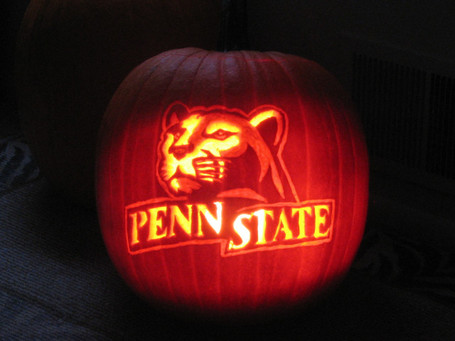 Happy Halloween weekend ladies and gentlemen. Should be a fun combination of watching football, drinking beer, wearing costumes, and for those of us on the east end of the B1G footprint, shoveling our driveways. Hit the jump and we'll take a look at how Penn State's season starts in earnest tomorrow against Illinois.

(Things will be a bit abbreviated (and not formatted) due to technical issues today. Whether Penn State wins or loses this week, though, I think there will be a lot to react to so next week I'll be making up for it.)

A shoot out in the first half and a defensive stuggle in the second. While the productivity of the Northwestern offense had a lot of PSU fans on the edge of their seats in the beginning, it actually was pretty similar to what we have seen the last couple years when these teams meet. In both 2009 (very good PSU defenses) and 2010 (not so much), NW came out and moved the ball with ease aganst the Nittany Lions. And just like last Saturday, Tom Bradley worked some magic at half time and completely shut the Wildcats down.

If anybody has any idea why Bradley can't just tell his guys how to stop this team BEFORE the game starts please let us know in the coments. Nevertheless, they did a great job and came out with the W. Northwestern's offensive success in the first half does not have me worried that this defense is anything but very-good-to-great. I think the next three games all feature opponents that should struggle against the Lions much more than the Wildcats' scheme.

Also: Devon Smith. I'm not sure how much I've expressed my reservations about him as a football player on the site, but the people who have watched the games with me (or been in shouting distance in bars I frequent) know that I haven't exactly bought in. Gotta give credit where it's due, though: the guy had a great game last week. One game doesn't make a great player, but it does give us hope that this could be the beginning of some good things from the guy.

ESPN's college football promos love to tell you that "every game can change a season." While that's not always the case, Penn State's season really does hinge on tomorrow outcome. They stand at 7-1 today, maybe one of the least exciting trips to such a good record as you can imagine. Those 7 wins have not launched them into the top of the polls. Those wins have, however, put them into a position that they are now looking at a legitimate chance at a very memorable year.

What does a win get you? A win gets you Hulkamania:

Win tomorrow against Illinois and you head into the bye at 8-1. When you consider attrition, it's not impossible that they could host Nebraska with a ranking right around the top ten in the country. Nebraska comes to Penn State for the first time in 9 years and for the first time as a B1G-member. Penn State's last home game, which means the obligatory Maybe-Joe's-Last-Home-Game-Ever. Is GameDay in State College that farfetched?

Penn State fans hopping onboard this team at 8-1 coming out of the bye: not farfetched. I think you'll see Nittany Lion faitful channeling their inner Hulkamaniacs if that's the case. The Power of the Pythons, brother.

If you know a better Hulk Hogan promo (or any wrestler for that matter, not gonna hate on the Ultimate Warrior) feel free (read: Please) to share in the comments.