You know, everyone has their own reason they became a fan of college football.  Maybe your Dad (or Mom) was a big fan, so you became a fan.  Maybe you went to school and decided to go to the games in the student section for something to do, or maybe you had some other path to fandom.

Whatever your path was that brought you to this great, wonderful game, you understood why you took that path this past weekend.  I know that's a tough statement to agree with if you're Wisconsin (second week in a row) or Iowa (second year in a row), but college football is the most emotional of games, and we saw why on Saturday.

From Happy Valley to Minneapolis, we saw all kinds of things that boggled the mind and defied all reason and understanding.  Don't try to make sense of it.  Just enjoy the ride, and let's see where it ends up taking us.

That's just a nice way of saying I have no idea what's going on in the B1G this year.  None.  I mean, look at these divisional standings and tell me what's going to happen.  And do it with a straight face, and no fingers crossed behind your back.

And there's a 63% chance you'll be wrong by the end of the year. 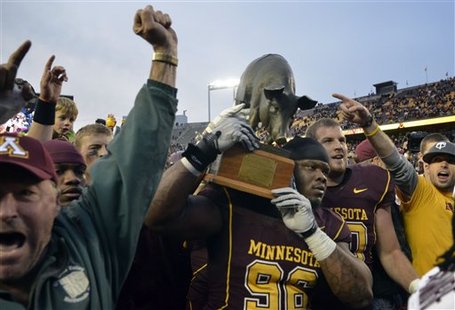 An Inspired Win For Minnesota

Minnesota 22, Iowa 21.  Minnesota had no business beating Iowa, yet they did.  The Floyd of Rosedale should be in a trophy case somewhere on the Iowa campus, but it isn't.  This was the kind of game Gopher fans expected to see after Jerry Kill was hired, but were treated to 3 of the most noncompetitive conference games in recent memory.  The Gophers played inspired football, and maybe, just maybe, this is the win that Kill and his staff need to give the team confidence as they head towards the end of the season.  For Iowa, what can you say?  On paper, they should have beaten the Gophers handily, but Minnesota just made more plays.  It seemed like Iowa spent the entire first half in Minnesota territory, yet all they had to show for it was 7 points--against a terrible, terrible defense.  For the second year in a row, Minnesota looked like they just wanted it more.  Last year, I could maybe see that, based on the disappointing season Iowa had.  But this year?  Didn't see that coming. 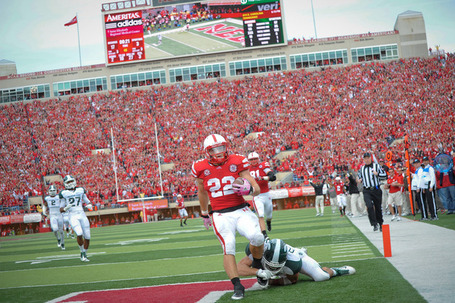 Rex Burkhead stomped all over Sparty

Nebraska 24, Michigan State 3.  Oh, Sparty.  Just when you get me on the bandwagon, you roll over a rusty nail and get a flat tire.  I had you as my top team in the conference after your thrilling, last minute win last week.  But after what you did on Saturday, what do I do with you?  Fourth?  Fifth?  Now, you're in a dogfight with Nebraska for the Legends division, and they beat you head to head.  Good luck.  For Bugeater, they're pretty much right where most of us thought they'd be.  Their one loss was expected, maybe not in the manner in which it occurred, but they're still the favorite for the Legends.  Their season will turn on back to back road games at Penn State and Michigan in a couple of weeks. 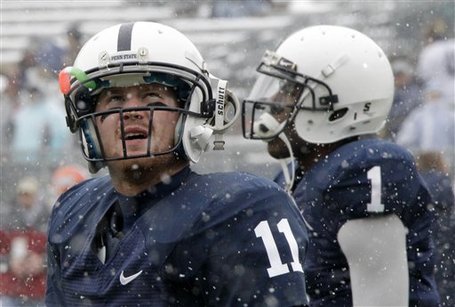 This is just a cool pic, isn't it?  I love football in the snow

Penn State 10, Illinois 7.  Well, well, well, look who's in the Catbird Seat in the Leaders Division as October turns to November.  I said at the beginning of the year that if you have two quarterbacks, you really don't have any.  And while that's still true for Penn State, so what--it's working.  They have a legitimately great defense, and an offense that does just enough to win.  Can it carry them to Indianapolis?  I'm becoming less skeptical with each passing day.  For Illinois, it's starting to come off the rails pretty quick.  They should have beaten Ohio State, they should have beaten Penn State, but now they find themselves buried in the Leaders division with virtually no shot at Indianapolis.  Since they became bowl eligible, they've stunk, and you have to wonder if Ron Zook might be worried about his job security. 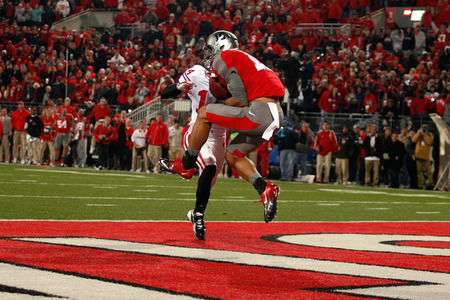 Ohio State 33, Wisconsin 29.  Game of the year in the Big Ten?  I can't say definitively yes, but it should be in the conversation.  Ohio State defense plays great  then gives up two quick 4th quarter scores.  Russell Wilson shakes off a bad game to give the Badgers the lead late.  And then the legend of Braxton Miller was born.  40 yards, across the body, into the waiting...WIDE open arms of Devin Smith.  Seriously, how does a guy get that wide open in the end zone with 30 seconds left?  For OSU, it's a statement win for Luke Fickell, and gives the Buckeyes some mojo leading up towards Michigan.  For Wisconsin, all they can do is pick up the pieces.  Two weeks ago, they looked like a team that could win the National Championship, and had that Aura of All Time Greatness about them.  Now, they're in a dogfight just to win the Leaders division and get to Indianapolis. 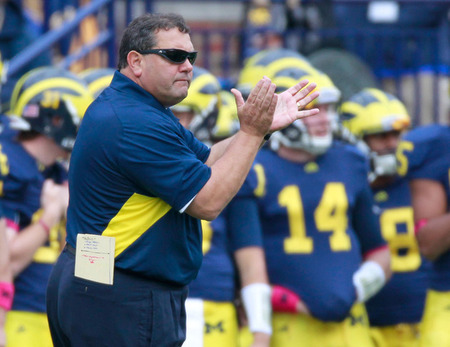 Michigan 36, Purdue 14.  Michigan just keeps rolling along, under the radar and tied for first in the Legends with Nebraska.  Their schedule is very favorable until they close out with the Huskers and Ohio State, but both of those games are at home.  Could they stub their toe against Illinois or Iowa?  Sure, but I don't see it.  The Legends division race will come down to that Nebraska game, and I have to say that right now, I'll take Michigan.  For Purdue, they made a game of it early, but with this loss I think 6 wins and a bowl is a bridge too far now.  They have to win two of either OSU, Wisky, Iowa, or Indiana.  They'll beat Indiana, and they might steal a win form Iowa, but I think that's a longshot.  Of course, Minnesota beating Iowa was a bigger longshot, and Purdue and Iowa are each others Most Hated Rival, so who knows. 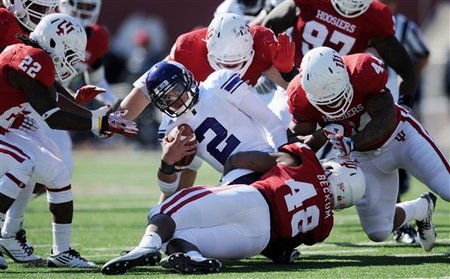 Northwestern 59, Indiana 38.  I don't know what to say about Indiana that hasn't already been said--they're a bad, bad team, and just looks overmatched against everyone.  I really wish there was a Minnesota-Indiana cripple fight this year; it would be must see TV, much like Cops or car crashes on live news are.  It's kind of funny looking back that some of us thought Northwestern was a top tier team, isn't it?  Their offense can dominate a bad defense, like they did against the Hoosiers, but their defense can't dominate anyone.  I think that unit might be as bad as Minnesota's, if not worse.  At least Minnesota kept USC and Iowa in check.  For the Wildcats, it'll be tough to make a bowl, even with this win.  Definitely not a Persa Strong year in Evanston.

So we now enter November, and there is no clearly defined rank order like there has been in recent years.  It can be maddening, it can be frustrating, but Lord knows, it sure hasn't been boring.