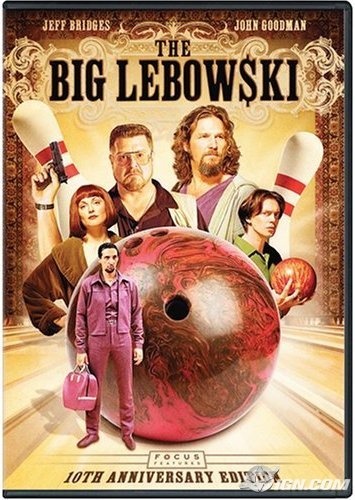 I'll admit, when The Big Lebowski came out, I didn't get it. I thought it was weird and disjointed and unremarkable. But like most Coen Brothers movies, you have to watch The Big Lebowski a good 5 or 6 times before you can truly appreciate it.

One of the things I love so much about The Big Lebowski is that the stuff that I laugh at when I watch that movie today, isn't necessarily the same stuff I laughed at the first half dozen times I saw it... not unlike the B1G. The things that I love about the B1G have changed over time.

It's actually not unlike this B1G season. The teams that we thought were great early, are not the same as we think now. Quite an interesting Power Poll this week. Our writers had OSU ranked anywhere from #1 to #5, Wisconsin anywhere from #1 to #4, and MSU anywhere from #2 to #5. Only 1 team was universally picked in the same spot by everyone... Indiana at #12.

It's obvious to everyone that The Dude has a way with words, but when threatened with his wedding tackle, the part of him that is most precious, that makes him a man, being taken away, The Dude gets emotional. He lashes out. It's not like The Dude can just find another johnson.

While The Dude is pretty sure that everything has been completely messed up, Walter is positive that despite some setbacks, nothing is f'd. In fact, Walter is so sure that nothing is f'd that he has a plan of his own to get the information Lebowski wants from the Nihilists AND keep The Dude's money. Walter is supremely confident in his plan... almost smug.

The Nihilists find themselves in a fantastic situation to make some money by posing as the group that kidnapped Bunny Lebowski. Things go pretty well for the Nihilists until they realize that people just don't take them that seriously.

Walter is a little set in his ways, and he doesn't much care to have to explain himself to the likes of Donny. When Walter was married to Cynthia he apparently converted Judaism, and just because Cynthia isn't around anymore doesn't mean that Walter isn't Jewish anymore... right? He's hanging onto his Jewish tradition... and watching Cynthia's Pomeranian.

The Stranger: "Say, friend - you got any more of that good sarsaparilla?"

The Stranger mosies in and out of the movie, and while he's only just briefly a part of the plot, in many ways he embodies the moral compass of the movie. He tells The Dude's story without completely accepting everything about The Dude. He doesn't get a chance to meet Donny, but he hates to see him go. You get the feeling that while he's a bit confused by the whole ordeal, The Stranger embraces it.

The Big Lebowski: "I just want to understand this, sir. Every time a rug is micturated upon in this fair city, I have to compensate the owner?"

Lebowski isn't always talking about the same thing as The Dude, but what Lebowski is sure of is that no matter what The Dude is blathering about, it's not his problem. The way that The Dude is suggesting the matter be resolved just doesn't register with Lebowski, and he's not about to change his thinking because of some unemployed idiot.

Walter Sobchak: "This whole f---ing thing... I did not watch my buddies die face down in the muck so that this f---ing strumpet..."

Walter is fed up. Life is supposed to work out a certain way and when it doesn't he flies off the handle and screams about 'Nam.  The Dude is always quick to remind him that this probably isn't about 'Nam, but Walter can't shake it. Anger, violence, a one-headed monster at QB... Walter will do whatever he has to to make sure that things get back to normal.

The Stranger: "I guess that's the way the whole durned human comedy keeps perpetuatin' itself."

The Stranger happens to know that there's a Little Lebowski on the way, but the reality is that The Dude's life is what it is. No matter what comes his way, no matter how emotional he gets, no matter how many acid flashbacks he endures, life is just always going to go along pretty much the same way for The Dude.

The Dude knows that he's entitled to something, he knows he's succeeded in some sense, but he's not quite sure how, and he doesn't quite have the math skills to figure out what he's owed.

The Nihilists wanted to put fear into everyone, so they sent a fake toe. I mean, it's a real toe, don't get me wrong, but it's not really Bunny's toe. This toe strikes fear in The Dude, but it's not fooling everyone.

Donny has just died, The Dude and Walter are in mourning, and the funeral director is trying to take advantage of them by getting them to spend hundreds of dollars on his "most modestly priced receptacle." But Walter won't have it! He's taking matters into his own hands. Is there a Ralph's around here?

The Dude wants Lebowski to think that everything is okay, but Lebowski knows better. Everything is totally f'd. In fact, if there was a way to screw it up, The Dude found it by getting Walter involved.