Share All sharing options for: Penn State Without Paterno 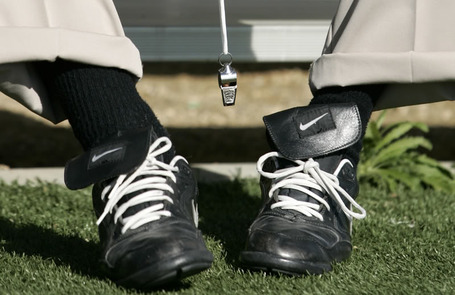 This Saturday the Penn State Nittany Lions will host the Nebraska Cornhuskers in Beaver Stadium.  It's the type of game that Penn State fans live for: both teams are ranked, the outcome is crucial for the Lions' chances at the Big Ten Championship, and the forecast is for a clear, beautiful autumn day in the low 50's.  It should be an ideal football day.

Sadly it will be anything but ideal.  For the first time in the modern era of Penn State football, Joe Paterno will not be representing the Nittany Lions.

It will be the first time the Penn State fan base congregates in Happy Valley and confronts the question:

What is Penn State without Joe Paterno?

For the first time in over 60 years, Penn State will take the field without coach Joe Paterno.  His "Grand Experiment" and "Success With Honor" mantras, national titles, and undefeated seasons contributed more than any other factor towards transforming the Pennsylvania State University from a rural agricultural school to a name-brand top public institution.  He is the school's hallmark tradition.  He, more than any other individual, made the school.

And on Wednesday night the school that he made fired him.  You don't have to look far to find endless opinions as to whether they should have or whether they had to.  It's an emotional issue and a controversial one.  Child abuse is one of the worst crimes a human being can commit, and our sympathy and prayers go out to the victims and their families.  For my part, I think the Board did the only thing they could do.  Regardless, Joe is gone.
But the Paterno Administration is not gone, and for one more game in Beaver Stadium, the Paterno Era is not really over.  The Paterno Administration, the staff of loyal assistant coaches that have largely been running the show recently, will still be responsible for fielding an 8-1 team on Senior Day.  Interim Head Coach Tom Bradley has been coaching at Penn State for 31 years, longer than the (now) longest-tenured active head coach in major college football Frank Beamer has been at Virginia Tech. 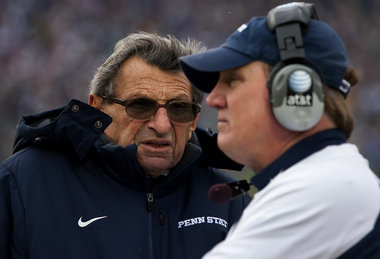 While Joe Paterno may have given birth to Penn State, and may have been the biggest personality associated with Penn State, Penn State is bigger than Joe Paterno.  "We Are Penn State" is probably our most well-known tagline, and if anything, the saying is a recognition of the idea that Penn State fans understand that they are part of something bigger than themselves.  The generic uniforms without a name on the back is a manifestation of this core ideology, a physical embodiment of the spirit that the team comes before the individual.
So who are we when we say "We Are Penn State"?  We Are the fans of a successful football program, priding itself on doing things the right way.  We Are the fanbase that Alabama people praised our hospitality and respect when they visited in September.  And We Are more than a football fanbase.  All Penn Staters can take pride in the phenomenal successes of one another, whether they be the world's largest student run philanthropy or maybe even one day the cure to cancer.  We Are a community of students that have taken the initiative to raise awareness for child abuse.  We Are a community of alumni that will raise $500,000 for that cause.  Despite the events of the past week, we still have a lot of things to take pride in.
The days of being able to let Joe Paterno's image be the easy example for the Penn State Way are over.  Starting tomorrow, it will be the conduct of ever one of us as individuals that will be the sole measure of outsiders' perception of Penn State.  Our individual good deeds, whether they be as sports fans, business colleagues, good neighbors or otherwise, will demonstrate to the nation what Penn State is. 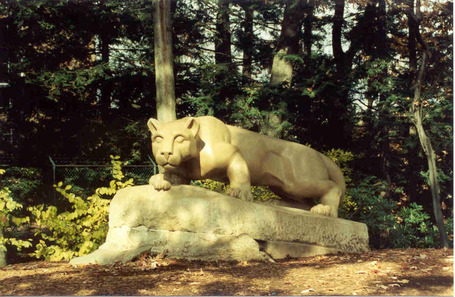 This Saturday will be a spectactle.  Penn State fans will be trying to reconcile their perceptions of what has happened in the program.  They won't agree with one another.  Add in to the mix Nebraska's first trip in nine years, the national news media, and other elements like the Westboro protesters, and it could be a volatile situation.  It won't be an easy day for 100,000+ people to conduct themselves with the patience and respect the situation calls for, but I think it's a challenge that the Penn State community will meet.
Our old leaders are gone.  On Saturday, the nation will watch as the everyday man and woman of the Penn State community takes the center stage once occupied by Joe Paterno.  It is up to every one of us in attendance to show them that when we say We Are Penn State, we are a group of people that still stand for integrity, and take pride in our respect for others and ourselves.
Let's Go State.
--
If you missed the link, http://www.proudtobeapennstater.com/ is an effort by Penn State alumni to help victims and survivors of sexual abuse.