In a week filled with such tragedy, maybe it's time we talk about someone who has went out of their way to work positively for the community that nurtured him during college. 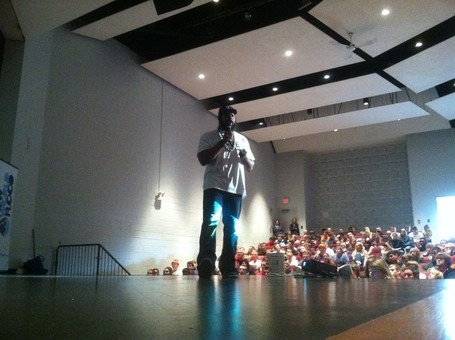 Six feet tall. 260 pounds. Track star speed. TJ Duckett ran over defenders his whole life, picking up more than 3000 rushing yards at Michigan State (some of you may vaguely remember a catch he made against UM in 2001) and then playing eight seasons in the NFL as a change of pace pounder back. After retiring from the NFL, TJ came back to the Lansing area, looking for a new purpose.

What Todd found was other people. He'll tell you that going to the City Rescue Mission in Lansing showed him struggling individuals up close and personal. He'll tell you that fasting for forty days helped clear his mind. He'll tell you that going by Todd instead of TJ signaled a change in his life's purpose. He will be humble until the cows come home (I'm from Ovid-Elsie, lots of cows coming home) about helping start Lunch With A Purpose Lansing. He'll talk with pride about Make A Difference Foundation Tanzania, where he helped build a school to give African kids an education. So let me talk about his new venture, called New World Flood, which involves the very basic concept of Todd meeting with school kids all around the Mid-Michigan area. Through New World Flood, Todd encourages students to have high self-worth and impact others with community service. It's an unbelievably positive thing.

That beard takes the cake; he cuts that for charity sometimes...

I went to Eaton Rapids to watch one of these conversations with 200 Eaton Rapids high schoolers. Todd put a beat on the speakers, a generic, rolling Cali-in-the-90's beat, and started bouncing. The kids stared. He started clapping his hands rhythmically. The kids clapped. He stopped, smiled. The kids were hooked. And then he began philosophizing.

Todd looked at the kids and said, "Today, I want someone in here to step up for your community. Today, I want you to make choices that positively impact the person sitting next to you. Today, I want to boost your self worth." A group of 7th graders were so inspired by Duckett's example that they created a Middle School Lunch With A Purpose where once a week at lunch, the kids carry out an activity that improves their school in some way. Lawmakers push for school reform and a more efficient education system, which is good. Todd goes the grassroots route, using his name recognition, athletic reputation, and affability to strengthen schools and communities at their base. That's a powerful example from the former Spartan star.

To see the rest of the Buick Human Highlight Reel, and even share a story of your own, go to ncaa.com/buick. This post is sponsored by Buick.