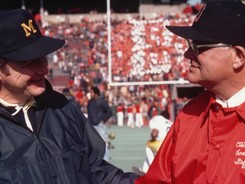 Earlier today it was announced that Joe Paterno's name would be removed from the B1G championship game trophy. Some suggested that "Punchy" Woody Hayes should become the the co-honoree with Mr. Stagg, but Woody already has a trophy to share.
Maybe it's a bit early to speculate on the winner, but I thought it might make sense to discuss who might be in line to receive the inaugural Hayes-Schembechler award. I hope that this award doesn't turn into the "Heisman" for B1G coaches. I would hope that it will be awarded to the coach who has performed the best work in a given season not necessarily which ever coach happens to win the B1G championship.

The odds (mine) and a case for each coach after the jump (alphabetically).

Bret Bielema (3-2) PRO: Most everyone believes that UW will win the B1G championship game. It is natural/easy to award the winning head coach this trophy. CON: UW has the talent and was a preseason dark horse to play for the BCS championship. In that light the season can be seen as a disappointment.

Mark Dantonio (3-1) PRO: It was thought that MSU might have a better team than last years B1G co champs but do worse due to a harder schedule. Two weeks to the end of the season and the Spartans are in control of their own destiny to make it to Indy. If MSU wins the B1G game, I think Dantonio wins it. CON: Road wins over OSU and Iowa non withstanding, MSU did not seem very competitive in losses to ND and NU-L.

Kirk Ferentz (25-1) PRO: A rebuilding season was expected in Iowa City this year. Ferentz has his team bowl eligible and, until last week, in control of their own fate in the Legends division. CON: Lost to Minnesota. Minnesota might not get another B1G win this season.

Luke Fickell (10-1) PRO: Another coach who would be guaranteed to win if his team makes (and wins) the B1G game. Fickell took over after the tire fire of OSU's off season and has them in a position to win the Leaders division (with help), bowl eligible and looking at a chance for an 8-4 regular season. CON: Lost at Purdue, road wins are tough to come by in the B1G this year but OSU will arguably always have the most talented personnel in the B1G. He should have had his charges better prepared for this game. The collapse at NU-L doesn't help his coaching reputation either.

Pat FitzWizard (20-1) PRO: Righted the team ship after a dreadful 5 game schneid and scored the inexplicable upset of NU-L (maybe his wizard powers only work against corn based schools). CON: @PersaSTRONG never worked out the way it was supposed to. Making it to a bowl and breaking that awful streak might be all he can hope for. I can't see the COY coming from a 7-5 or 6-6 team.

Brady Hoke (8-1) PRO: If the chips fall for the Wolverines and they land in the B1G game then I think this is a lock. Even still he has taken the ill-fitting recruits of Rich Rod and has his team in position for no worse than an 8-4 record (and an outside shot at a BCS at large berth). CONS: While the comeback over ND might be their "signature" win, UM has beat the teams they are supposed to and lost to the teams expected. Nice season for the men from Ann Arbor, just not enough to win Hoke Coach of the year (skipping UW and PSU probably helps the record and hurts his cause).

Danny Hope (15-1) PRO: I predicted them to finish at 1-11 (/PurdueMatt'ed) and Hope has his team still (however faintly) in the Leaders race. Purdue should reach bowl eligibility for the first time since 2007. CON: Purdue lost to Rice. I think the best award Hope will get this off season is the chance to come back and coach the Boilers for another year.

Jerry Kill (75-1) PRO: Has had his team more play competitive games as the season has worn on. Kept a rivalry trophy. CON: Minnesota has been awful at times this season. Lost to a I-AA school. He needs more time to get his own personnel in place and then we'll see what happens.

Joe Paterno/Tom Bradley ( ∞  -1) PRO: Had the scandal not broken and PSU went to the B1G game you could see the conference leadership giving this award to Paterno as a send-off/career capper. CON: As shown today the conference wants to put as much distance between itself and PSU as possible.

Bo Pelini (5-1) PRO: Pelini has the Huskers in a position to go to the B1G game (with help). A 10-2 season and a BCS bowl are still in the realm of possibilities. Survived a season of Taylor Martinez arm punts without disemboweling him on the sidelines. CON: Preseason favorite to win the Legends. Lost at home to NU. It's tough to imagine a scenario for Pelini to win this over other coaches with more history in the B1G (unfair as it may be) without at least getting to the B1G game.

Kevin Wilson (1500-1) PRO: His team has played competitively this season. Held UW to 59 points after last season's debacle. Beat a I-AA team. CON: Beat a I-AA team and no one else.

EL Zookerino ( ₪Ộ∩۩Ю - purple) PRO: The Illini raced out to their best record since 1951. Zook and his team looked poised for a memorable season CON: Hasn't won a game since beating IU in week 6. The Ron Zook experience may be coming to a close in Champaign.