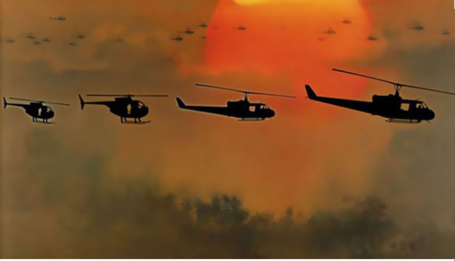 As an American Man, there are five movies that you need to see in your life and be able to pull at least three quotes from, on demand, for nearly any situation.  Those movies are Caddyshack, Animal House, The Godfather, Bull Durham, and Apocalypse Now.  Know these movies and the key quotes from them, and you will go a long way in this world.

And after the week the Big Ten had, Apocalypse Now seemed more than appropriate.  Back when I was a young kid, maybe 11 or so, I saw this movie for the first time and realized being an Army helicopter pilot was the coolest thing in the whole world, and that's all I wanted to do from that day on (the world needs ditch diggers, too).  I didn't really 'get' the movie until years later, and I never got the stark depression that war really is until I had to, you know, go fight in one and deal with people dying and getting shot at and shit like that (was it over when the Germans bombed Pearl Harbor?).

But ever since my time over there, I really came back with a new perspective on life--it's never as bad as it seems.  For all the crap that we've had to deal with this week as fans (it's not personal, just business), at the end of the day I have a warm, comfortable place to sleep, good food is in the refrigerator, and no one is getting on my helicopter dead or dying with a hailstorm of bullets flying around my pretty, pretty face (Relax!  Let's have some fun out here.  This game's fun, OK?  Fun goddamnit.)

So let's try and make some order out of this chaotic season, after the jump.

Wisconsin is the best team in the conference almost by default at this point, but Bret Bielema is probably one of the most tone deaf people in the country.  And his team should've been an all time great one.

After losing to Northwestern at home, Nebraska bounced back and is right back in the middle of things.

Col Kilgore:  I love the smell of napalm in the morning. You know, one time we had a hill bombed, for 12 hours. When it was all over, I walked up. We didn't find one of 'em, not one stinkin' dink body. The smell, you know that gasoline smell, the whole hill. Smelled like...victory. Someday this war's gonna end.

Sparty is in the driver's seat for the division as we wind down the season, but are they really?  Probably.  Maybe.  But we won't know for sure until it's over, will we?

Captain Willard:  It's a way we had over here for living with ourselves. We cut 'em in half with a machine gun and give 'em a Band-Aid. It was a lie. And the more I saw them, the more I hated lies.

I'll let that quote stand on it's own.  And it's not directed at the great fans and students of Penn State, it's directed towards your administration.

Lance:  Disneyland? Fuck, man, this is better than Disneyland!

It's been a good year for Michigan, for the most part.  They're not out of it for the conference championship game, but they're going to be favored against OSU and should get a good bowl draw.  Nice effort from Brady Hoke and company up to this point.

Captain Willard:  Everyone gets everything he wants. I wanted a mission, and for my sins, they gave me one. Brought it up to me like room service. It was a real choice mission, and when it was over, I never wanted another.

Substitute 'mission' with the word 'tattoo', and you pretty much have the OSU season in a nutshell.

Captain Willard:  If that's how Kilgore fought the war, I began to wonder what they really had against Kurtz. It wasn't just the insanity and murder; there was enough of that to go around for everyone.

Your three biggest games of the year were Iowa State, Minnesota, and MSU.  Two rivalry games and a survival game to stay in the division race, and you fell flat in all three.

Captain Willard:  Sir, I am unaware of any such activity or operation... nor would I be disposed to discuss such an operation if it did in fact exist, sir.

The team that no one thought was any good has sneaked into the thick of becoming bowl eligible.  How has this happened?

Captain Willard (speaking about Col Kilgore):  Well, he wasn't a bad officer, I guess. He loved his boys, and he felt safe with 'em. He was just one of those guys with that weird light around him. He just knew he wasn't gonna get so much as a scratch here.

Col Kilgore:  You can either surf, or you can fight!

So what's it gonna be, Illinois?

Captain Willard:  Oh man... the bullshit piled up so fast in Vietnam, you needed wings to stay above it.

Unfortunately, Minnesota doesn't have any wings.  But at least the bullshit from the Tim Brewster era has stopped piling up.