Share All sharing options for: ...Where Michigan Finally Met Expectations 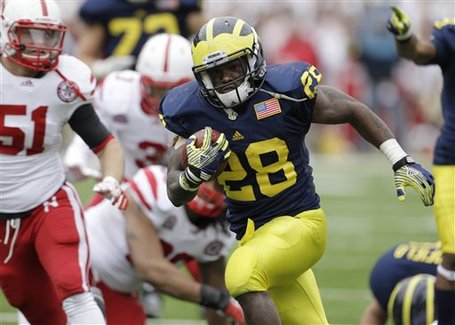 This Michigan season has been an under the radar one ever since the MSU loss. Everyone assumed it was the same old "start hot and then get shown for what they really are" Michigan team. Apparently, not so fast, my friends. So - What happened? What should we take from this season? And what's going to happen this week versus OSU?

*top tier being a relative term; I guess we could have said "ranked", but 2008 Wisconsin was ranked and turned out to be a pretty mediocre football team. Nebraska has 8 wins, including beatings of MSU, OSU, and PSU. So that's top tier-ish.

God was it a glorious beatdown. Michigan's defense...was the star, pressuring Taylor Martinez, causing fumbles, filling running lanes. A few of the blitz calls - genius. There was a jumpball-ish throw to a Nebraska wide receiver in the 3rd quarter; the Michigan cornerback, playing behind the WR, aggressively contested the throw without interfering. I turned to my friend grinning. It seemed like the coaches and defenders were all on the same page.

Michigan improved so rapidly this year on defense, It's like a whole different team was brought in. But let's not go patting each others backs too quickly. Michigan played in one of the weaker B1G's in recent years and avoided playing the two best teams from the Leaders division, Wisconsin and Penn State. It does seem that Tom wasn't too far off on his BCS prediction though; a 10-2 Michigan team would look pretty damn good in the Cap One.

Other than those two comparisons, we know a few things. Vegas will make UM a touchdown favorite, but I'm not sure anyone in their right mind would get arrogant or overconfident. Michigan hasn't beat OSU since my sophomore year in college - Cautiously optimistic is not a bad way to look at this game. The Buckeye defense is still top-notch and Michigan struggled mightily against a solid MSU D.

One very real positive is the emergence of Fitzgerald Toussaint. Michigan has been looking for a star tailback, someone who understands how to hit the holes created in their blocking scheme (and thanks to that O-Line, there have been holes of late). Toussaint's patience and shiftiness give Michigan a playmaker to take the weight off of Denard Robinson.