Urban and OSU, Sitting in a Tree...

Share All sharing options for: Urban and OSU, Sitting in a Tree... 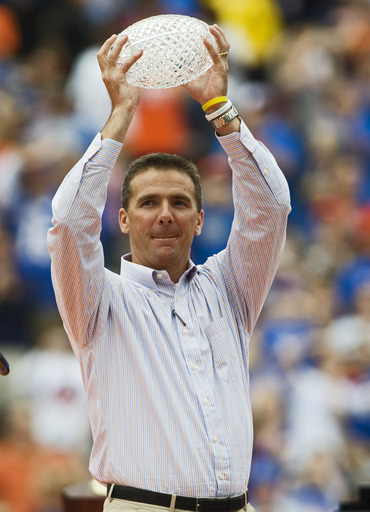 Late last week, reports surfaced that Ohio State and Urban Meyer had "spoken" about a prospective job opening in Columbus.  In a scoop that may well redefine the pejorative "reports vs. reacts" meme that professional journalists use to set themselves apart from bloggers, Eleven Warriors -- far and away the best Buckeye community on the web -- first broke the story, and ESPN later confirmed that there was "strong" interest on both sides.

On Saturday, from his comfortable perch in the broadcasting booth at Michigan Stadium, Meyer was given an opportunity to douse the bonfire of speculation with cold water, by stating that: 1. He had not spoken to Ohio State, either directly or indirectly, 2. He was not interested in returning to coaching at Ohio State or anywhere else, and 3. If offered a job at Ohio State, he would decline.

Meyer did nothing of the sorts, stating "I've not been offered any job, and I've certainly not accepted any job."

If this non-denial denial only added more fuel to the flames, this morning's interview with Pat Dooley at The Gainesville Sun, has created an inferno.

But that's small potatoes compared to what Meyer went on to say.

After acknowledging that the "issues" that caused him to step away from coaching this past year (i.e. health problems and a desire to spend more time with his family) are still in play, he noted that, "I've done some research [and] I've found that it is possible to have balance between your job and your family, that there are coaches out there who are doing it."

In other words, if other coaches can obtain a functional work/life balance while in the spotlight, so can he.  That's one down, but what about Meyer's nagging health?

Make no mistake.  Meyer used his interview with Pat Dooley to start making a case for his return to coaching.  But that could be anywhere, anytime.  It doesn't necessarily mean he's going to...

That noise you're hearing is me jumping up and down and screaming like a kid on Christmas day from my 25th floor office in downtown Los Angeles.  Meyer didn't just talk about any coaching opportunity, he talked about Ohio State.  There's no need to read between the lines on this one, Meyer and Ohio State are like two teenagers falling fast and hard.  Like Ron Burgundy's excited exclaimation in Anchorman: "Veronica Corningstone and I had sex, and now we are in love!" it's all Urban Meyer can do to avoid telling the whole world the good news.

The kid from Astabula, who pulled himself up by his own bootstraps, and coached himself to a 104-23 record and two National Championships with a buckeye in his pocket, whose first job was at Ohio State, who counts Earl Bruce as his mentor, and Woody Hayes as his hero, is one-week away from coming back home.

Football is Urban's life.  As he put it himself, "I love football.  It's what I am. I miss it." Ohio State is Urban's dream job.

The only thing that can spoil this match made in heaven?  USC-esque sanctions.  Multiple year bowl bans, and double digit scholarship reductions.  The kind of crippling penalities that could render the love of Urban's life unrecognizible.

It could be the final cruel act in a running ten month nightmare in Columbus.  But maybe, just maybe, things are finally starting to look up.