Share All sharing options for: Michigan 40, OSU 34: Accept That Michigan Is 10-2 And Move On

Fans, and I suspect some OTE readers, will jump on many different kinds of Michigan-hating bandwagons. Four specific ones come to mind: 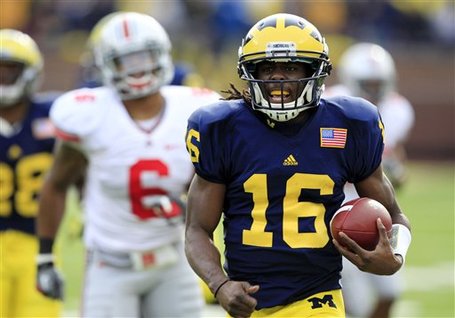 College football, and life in general, does move quickly past the present. People move past today's news to tomorrow's news...before today is even done.

So let me treasure this victory, the first of its kind since I was a 20 year old sophomore, the first since I whooped and hollered in the back of antiquated Peabody Hall. Let me cheer this victory because Michigan showed tremendous poise and physicality against a program that's been better than the entire B1G for the last ten years. Let me celebrate all those damn-the-torpedo Denard Robinson runs that kept so many drives alive. Let me celebrate ten wins (!) and defensive toughness. And my God, let me celebrate something most* of you support: Beating Ohio State.

*Those who subscribe to the "meteor theory" are free to hate at will.

Really the best OSU-UM game since 2006. Michigan found offense thanks to the legs and arm of Denard Robinson, but the emergence of Fitzgerald Toussaint (121 yards rushing) shouldn't be overlooked. Since ol' Fitzy began Michigan's featured halfback, Denard has looked 200x more comfortable in the Borges pro-form. How about that high passing efficiency too? Didn't...didn't see that coming.

OSU found their offense behind Braxton Miller and a sieve-like Michigan secondary. 236 yards passing...could have been 300 if Miller's arm was accurate. Oh, and don't forget the Will Hagerup fumble that came at the worst time. 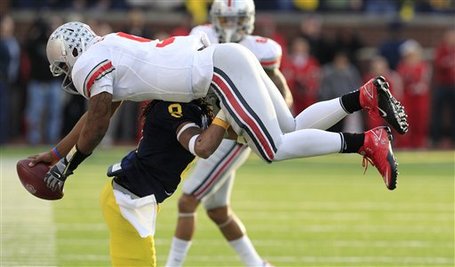 6-6 and three losses that were mere inches away from being wins (blocked PAT against Purdue, Miller's fourth down scramble that came up short against PSU, the overthrown bomb to a wide open Posey with 1:40 left against Michigan). Those plays were not made and thus OSU slipped down into mediocrity, barely bowl-eligible. This didn't always feet like a .500 team - sometimes they looked mean and dangerous (see: Wisconsin) and sometimes they gave up yards like no Ohio State defense has for a long time (see: Michigan's 462 yards).

Where Do We Go?

Oddly enough, Michigan's bowl destination is shaping up to be a most interesting post-season question. I don't profess to be OTE's bowl expert, but I assume the possible bowl game destinations are: Sugar, Fiesta, Outback, Capital One. I'll wait for Bama Hawkeye to weigh in.