Michigan's Defense Has Vastly Improved in 2011

The proof is in their 2nd half performances and ability to get third down stops (remember late versus Iowa, how many times the Hawkeyes were stopped on third and short?). Also take a look at the tremendous amount of rushing yards given up last year, and the year before...and compare that to 2011.

What's crazier than those insane stats? The 2011 defense was made up of the same kids who played in 2010. Apparently new coaches, less injuries, and new schemes was a good idea! /wins award for most obvious statement of the year. Everyone remembers 2010, where that 3-4, or modified 3-4, or the occasional 3-3-5...was completely ineffective, where opposing coaches would shelve the passing game because they knew the run game would be working all game. I went to the MACtion championship game for Miami (OH) in 2010. After watching a half of Red(skin)hawk football, I turned to Jon and said, "something is different with their defense, I can't figure it out." Turns out that after watching Michigan football all year, I wasn't used to watching a team that form tackled and put their linebackers in position to make plays. Things done changed. 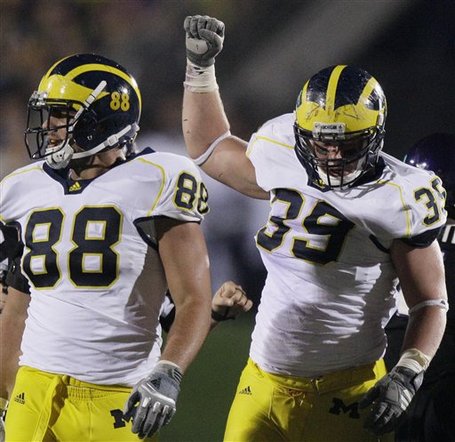 Take a look at the individual performances of the star runners Michigan faced this year:

Key performers exist mostly on the disruptive D-Line, but the secondary has improved also, giving up 1000 less passing yards than last years' squad. And yet -

Michigan can slow you or downright stop you if they know what's coming. But when OSU switched to a pass-happy attack in the season finale, huge flaws were made apparent.

FLAW #1 - The secondary, while vastly improved, is not extremely athletic or fast. They got torched against OSU multiple times and it's fortunate Braxton Miller can't throw an accurate deep ball or it would have been even worse. The defense also had the great fortune to a) stay healthy and b) play a bunch of teams with barely functional passing games (What's up, Nebraska, Illinois, Purdue, Minnesota). Matched up against Devier Posey, they fell apart.

FLAW #2 - If the veteran DL doesn't penetrate and disrupt, the linebackers and secondary are not All-B1G performers. This unit has excelled thanks to defensive adjustments and cohesive play - they will flow to the ball, they won't miss open field tackles. So if Mike Martin and Craig Roh don't disrupt the VT O-Line, the weakness of this Michigan defense will have to play above their collective talent level to slow the Hokies power run attack. 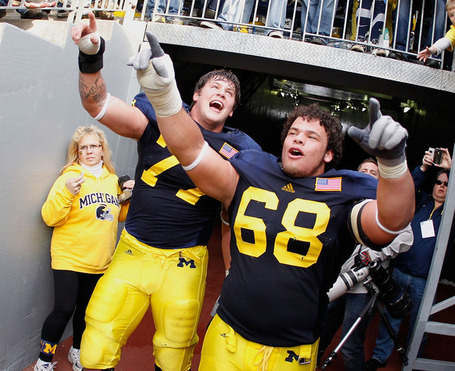 Michigan's offense is well known to be incredibly explosive, but the Wolverines and Hokies average about the same amounts of YPG. Michigan will need to follow the same script that worked for them all year: Dominate the interior and if things aren't working, make big 2nd half adjustments. Can VT be slowed? Clemson and Florida State say yes. We'll see what Michigan has to say.