Share All sharing options for: The 2011 Delanies: The Most-Hyphenated-Best-Worst-Awkward-Funny-Awesome-Plays-Players-Coaches-Etc Awards

I have always hated that time between the CCG and the real bowl games. When I say, 'real,' I mean, thanks for playing Ohio and Utah State, but the Idaho Potato Bowl is not really a great appetizer. Still, the nice thing about this break is that it allows every blog, talking head on the WWL, and media outlet the chance to dole out awards based on the meager 20 games or so that they may or may not have watched. If you're looking for that type of All-American effort, I can summarize what they usually say in a couple of sentences: OMGTHESECISTHEBESTCONFERENCEEVER! DIDYOUKNOWTHATTHEYDESERVEALLTHESPOTS? EVERYONEELSEISFATANDEATSCASSEROLES!

This is definitely not that type of award. The Delanies are based on suggestions from the OTE staff, and my one buddy who also thought it would be an awesome post. In the spirit of CTR himself, these awards get at the heart of B1G conference play. Instead of best LB, best Kicker, best waterboy, etc., the Delanies are based on the moments that made us drop our jaw, the plays that made us laugh, and the players and times that made us consider throwing our TVs through the window. In no way are the Delanies scientific, unbiased, well-thought-out, fair, all encompassing, or even democratic. With that in mind. Let's go ahead and get some commenting out of the way before you all get all angry: OMGIHATEHOWTHISENTIREBLOGISFILLEDWITHHOMERSWHODON'TKNOWFOOTBALL!!! RAWRMICHIGANOHIONEBRASKARAWR! WHYCANTYOUWRITESTUFFTHATACTUALLYDOESN'TSUCK?!?! NEBRASKAISSTUPID! IHATETHECOLORRED! B1GISBIG! RAWRRAWRRAWR! Great, I'm glad we got that out of our system. Now on the the 2011 Delanies!

Today's first award for going out and doing something positive comes from Ted. I'm going to take a second and let you guess where this is going... Aaaaand we're back. Any guesses? No? Well, then you're not trying and should go to the corner and think about what you've done. This award is simply called the Kirk-Cousins-Braxton-Miller-Suck-It-Bucky Award and not surprisingly this goes to:

Kirk Cousins and Braxton Miller for successfully trolling the Badgers' magical season in back to back weeks. 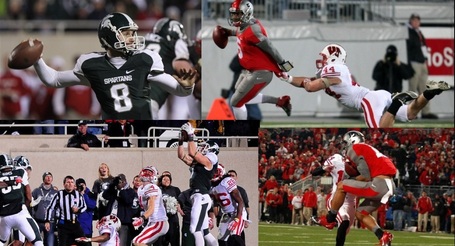 Our next award is a nomination I received from a good friend of mine and avid Hawkeye fan. Considering the playmaking abilities of this guy and the crazy one-handed catch in the game against Sparty, he deserves it. For that catch, The OMG-Did-He-Just-Pull-a-Justin-Blackmon award goes to:

Yeah, that catch was filthy. Congratulations to Iowa for making it into the jaw-dropping section for something other than losing every rivalry game. I'm sure you're proud [insert snarky Nebraska comment here].

Our second Jaw-Dropper award was nominated by Chad and goes out to the absolutely out-of-left-field plays that Northwestern put up in Lincoln. For these plays, both the Holy-Shit-he-just-went-higher-than-William-Gates-On-His-Way-To-The-Pylon Award and the Gary-Barnett-More-Improbable-Than-Northwestern-Winning-a-Bowl-Game Award go to:

And pretty much the entire Northwestern team for what happens in that next drive. Seriously people, if you were to name a team in the B1G that was going to ice a game by running a 13 play, 80 yard drive without throwing a pass, would Northwestern be in your first 10 picks? No, they would not.

Our third award is going out to one of my personal favorites. This award is for taking the ball whenever the hell he wanted it and making sure the line, "your stupid LB won't do anything in the B1G" was not uttered in his presence. The Jay-Z-Kanye-West-Paris-is-Far-Too-Long-a-Song-But-it-Does-Ball-So-Hard Award goes to:

Lavonte David for taking the ball from Braxton Miller, leveling Silas Redd at the end of the PSU game, and getting up after being pushed down by Iowa's TE (penalty flag thrown and all) catching up to the punk, and taking the ball from said TE. Yes, David does Ball-So-Hard (2:48)

Our last Jaw-dropper moment goes back to Wisconsin. In what was by far the best CCG of all, Bucky exacted a little bit of revenge on the Spartans. This award is rightly named, The-Gus-Johnson-Needed-This-Moment Award, and not surprisingly the award goes to:

Russel Wilson and Jeff Duckworth for this:

You all know the song, and it fits these plays and individuals all to well. For this category, we have an offensive, defensive, special teams, and coaching award! While Chad and Ted suggested we just show Indiana highlights, or Illinois for the half of the season they forgot to play, I thought these four groups deserved special consideration.

Our offensive (literally) (see what I did there) (awesome), award goes to a trio of QBs that really stood head and shoulders above the rest when it came to armpunting. In what can only be a testament to hard work and determination to the art of awkward and bad passing, these men showed us the real meaning of terrible. The Matt-Seracen-or-Any-Hollywood-High-School-QB-Portrayal-Close-Your-Eyes-and-Hope-for-the-Best Award goes to:

Joe Bauserman, Taylor Martinez, and Denard Robinson for their oft attempts at actually throwing the ball.

Bauserman actually didn't have any images available of him throwing the football. Something to do with the media not wanting to capture an image of a guy throwing an incomplete pass to the fiftieth row. The chart is probably much kinder than that game actually was.

For our defensive award, Graham nominated a special group of guys, who on one Saturday in Fall made sure that they were seen as the classiest group of defenders ever. The Drunk-Gary-Moeller-Sober-Woody-Hayes-Most-Aggressive-Playing Award goes to a group who was either super drunk and angry or just pissed of enough to be a little *ahem* questionable on a few plays. Our winner is:

Michigan State for this:

The Special Teams award goes out to a couple of guys who were anything but special. In what wins GIF of the year and absolutely terrible kicking/coverage awards, the Principal's-Rant-In-Billy-Madison-I-Award-You-No-Points-And-May-God-Have-Mercy-on-Your-Soul Award goes to:

Minnesota for this effort against Nebraska:

and Indiana for this effort against Wisconsin:

Our last Yakety-Sax Delany goes out to a special someone we have all loved and loathed in the B1G. Even though I have been following this conference for only a year or so, this man's reputation was well known to me. It takes a special person to win the lifetime achievement award in this category, but with his untimely departure, I had to make do with this one last chance to congratulate him and mourn the loss of such an easy target. Whether it was his pressers where he literally had no idea what team he was playing, what the score was, and how strategy played a part in anything, or if it was his eccentricity, penchant for playing from ahead, and the B1G's breakdown of the year, this man deserves every ounce of this Delany. And so, the John-Cooper-Bill-Callahan-Rich-Rodrigues-Also-Tried-To-Show-They-Could-Coach Award goes to:

There are no words that can be written that have not already been said. We will miss you Zooker, if for nothing but the comedy gold you provided the blogging community. Godspeed and enjoy your waterskis.

These are the awards that were mentioned to me, but don't quite fit into the first categories. Some of these made fans want to throw their TV through the window, and others made you want to drink a fifth of Jack (these are not mutually exclusive). In no particular order:

Nominated by BamaHawkeye for the Flopping-Like-European-Basketball-Players-and-JJ-Barea Award goes to the Michigan State Spartans for their breathtaking, "I'm hurt, no I'm not, but I really am... but I'm really not, but I'm kind tired, but..." performance in multiple games.

Nominated by Hilary for the Wait-a-Minute-Purdue-Is-Gonna-Do-It-Again-Aren't-They award goes to the Ohio State Buckeyes for managing to get an extra point blocked. Seriously people, Special Teams is important. If we've learned anything from the SEC, it's this: Spend some of that booster cash on a Kicker and Long Snapper. Ohio State needs to step it up on this front under Urban.

Nominated by Ted (full disclosure, Ted nominated a good chunk of these throughout. He deserves credit for some of the brainstorming), the Welcome-to-the-B1G-New-Guy award goes to Kevin Wilson and Jerry Kill for their spirited efforts in getting brutally destroyed during conference play.

Nominated by MSULAXER, the Kardashians-Are-Better-Actors-than-THAT-was Award goes to Brad Norman of the Badgers. Bitter much? "No, I'm not bitter!" - MSULAXER (He's bitter)

Nominated by Me, the Buried-on-Indian-Burial-Grounds-or-Just-Really-Crappy-Practice-Turf Award goes back to Purdue for the fourth year in a row. Seriously guys, figure something out. This is just getting sad. It's barely even funny anymore.

Another nomination by me, the Worst-Week-Ever-and-Not-Really-Worth-Joking-About-But-Cant-Ignore-how-Crazy-It-All-Is Award goes to Penn State. I still cannot express how ridiculously sad and awful it all is. I also cannot express how weird that Nebraska-Penn State game is. One day we will be able to reflect on it better. Today is not that day.

Also nominated by Me, for trolling Husker fans early and often, the Deal-With-It award goes to the Wisconsin Badger fans for their "Big Ten Football" chant in the middle of the fourth quarter. This has been an awesome season, and I have enjoyed arguing with every last one of you. Let's go win some bowls! (also, the SEC sucks)