Share All sharing options for: The Dayne Crist Question - Should Wisconsin Continue Going After One-Year QB's?

It's now down to Kansas and Wisconsin for Dayne Crist.

This would of course be the second grad student exemption quarterback to come to Madison in as many years. And it's already pissing people off. Check out the OTE thread here and tell me - Who wasn't offended by the thought of Crist playing quarterback in Madison? Wisconsin fans were angry because DC was a TO machine at ND. These Badgers were also worried how this would affect recruiting of quarterbacks. B1G fans, especially Spartans, were offended that Wisconsin would use, and presumably abuse, the exemption rule two years in a row. Others were pissy about the rule in general. 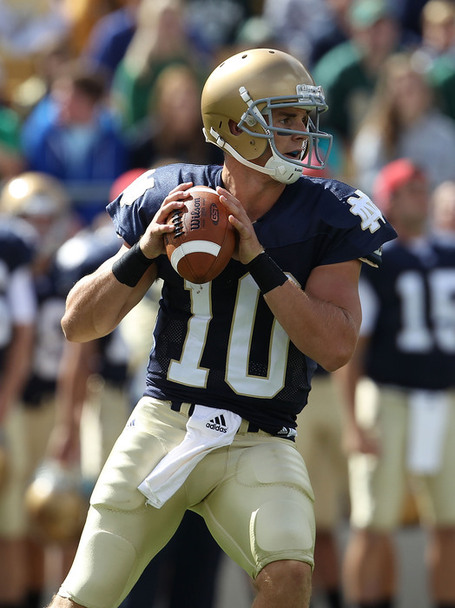 So let's conversate for a few about this odd situation that sort of resembles free agency and helped Wisconsin win the B1G title in 2011.

Why Wisconsin Should Not Pursue Another Transfer QB by Ted Glover

I can understand why you'd be wanting to dip into the Transfer QB well again--but for two ridiculous, 100-1 Hail Mary passes, you and Russell Wilson are talking about playing LSU in the BCS National Championship game.

I know this is a terrible, no good, very bad analogy to Badger fans, and as a general rule I don't like to mix my sports teams, but the 2011 UW squad reminded me in many respects of the 2009 Minnesota Vikings--solid, championship level team, with a huge hole at quarterback. The Vikings got Brett Favre, and rode his arm to the NFC Championship. The Badgers rode Wilson and his dynamic playmaking ability to a B1G championship and a Rose Bowl bid.

But like the Vikings, you took your shot at a title run and came up short. When the Vikes tried to put the band back together in 2010, it was an abject failure. Will it be that bad in 2012 for Bucky? No, I highly doubt it, but let's consider a couple of things: Although they have Montee Ball coming back (if he doesn't declare for the draft), Nick Toon, Josh Oglesby and Kevin Zeitler are seniors, and the latter two are two big parts of that massive offensive line. Yeah, they have guys just as big ready to step up, but you can't replace experience with a snap of the fingers. On defense, they'll lose at least 5 seniors, and possibly RS junior Marcus Cromartie.

In 2011, Wisconsin had no questions on either side of the ball...except at quarterback. Wilson was the guy viewed as the missing piece for what was potentially an all-time great team. So it made sense.

But this really doesn't. Frankly, Crist hasn't been all that impressive. He was a highly touted kid coming out of high school, but hasn't played at anything more than an average to slightly above average level. And Notre Dame has has a way more manageable schedule than Wisconsin has had over the last three or four years.

Finally, on the recruiting front, I don't think anyone would begrudge Wisconsin getting Wilson for one year to make that run. But if you do that a second year in a row, I think it might put a little bit of doubt in a potential recruits mind, and I would think it could be something that's used against him on the recruiting trail.

It just seems that Wisconsin would be better served in the long run to develop a kid they recruited, as opposed to hiring another one year rental.

Wisconsin Should Most Definitely Go After Transfer QB's by Graham Filler

This is an open and shut case. Let's address the real advantages of going after Dayne Crist or any other talented, grad program applying quarterback with a year of eligibility left.

Advantage #1. This exemption is going to be gone soon, as the NCAA tends to kill things which look a bit improper. So I doubt this will become a yearly thing for Wisconsin. Get 'em while they're available, is my motto.

Advantage #2. Wisconsin's system doesn't call for a tremendously talented quarterback. It calls for an accurate QB who scares defenses just enough to open up those deep crossing routes (hey what's up, super accurate Scott Tolzien). Is Crist going to be that guy? I have no idea, but the thought that there might be five Allan Evridge's sitting on the Wisconsin bench right now should be enough to convince skeptical Badger fans into thinking this is a good idea. Here's the coaching staff's philosophy, via Bucky's 5th Quarter.

After Wilson and Nate Tice graduate, the Badgers will have up to 5 QBs on the roster: Curt Phillips, Jon Budmayr, Joe Brennan, and Joel Stave. Bart Houston will be an incoming true frosh. Phillips has missed 2 years with knee problems, Budmayr has missed all of this season with elbow issues. Neither is a guarantee to play next year. They’ll both (I’m guessing) apply for a medical hardship, so Phillips will have 2 years of eligibility remaining and Budmayr will have 3. Brennan will have 3 years, Stave will have 4.

So, assuming the worst-case scenario here: Phillips and Budmayr are unavailable next year. That means the Badgers are basically in the same bind they were in before this season: a gaping hole at the top of the QB depth chart, with only a redshirt soph and a redshirt frosh to fill it. In that case, I can see where bringing in Crist makes sense. It’s the same scenario as ’11, just repeated.

But if Budmayr and Phillips CAN play, I think bringing Crist in could be trouble.

So would you rather be Bret Bielema on opening day 2012 with some quarterback controversy, some pissed/transferred mediocre backups...and a legitimate starter in Crist running your typically awesome offense?

Or would you rather be Bielema on opening day 2012 with giant question marks at quarterback?

Advantage #3. I don't think going after transfer quarterbacks hurts recruiting. It may even help recruiting. The Wisconsin program has been arguably the best in the B1G the last two years. One of those years, the Badgers were led by a high-character, highly talented transfer quarterback. Going after Wilson, and actually getting him over SEC schools, showed me that the Badgers want to win at all costs. Furthermore, it showed me that UW and the city of Madison possess the facilities and charm to bring in guys like Wilson. Those aforementioned facts don't sound like things a possible recruit would want to hear: I'm going to play for a school that wants to win. That's good. Other quarterbacks have come here and been tremendously successful. That's good too. 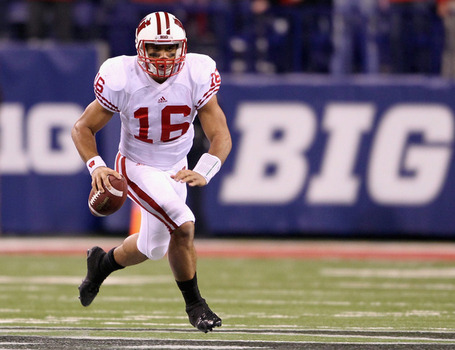 Advantage #4. Crist is big. Crist turned the ball over a bit too much at ND. Crist doesn't have the all-world gun that maybe Notre Dame thought they were getting. Those things don't matter as much as you think. He played at Notre Dame in an offensive system that really hasn't made any waves against decent defenses. He hasn't been supported by a big-time running game. So any positives that Crist can offer the Badgers is going to be magnified by the Wisconsin offensive system. Remember, Russell Wilson had some well-documented struggles with interceptions at NC State. Then he threw up a 31/3 TD/INT ratio for Wisconsin.

Advantage #5. If we had to put together all the things Bielema has been called or accused of being during his tenure in Madison, you and I would both know Bret Bielema was a philandering, hard-partying asshole with clock management issues who runs up the score for no reason. Take it away, Spartyfever -

Honestly, there are two outcomes to this. A) It works (again), and you get to the Rose Bowl/B1GCC/NCG of which good recruiting will follow. B) It blows up in your face, and you look like a disloyal fool who doesn’t trust his players to step up and would rather find outside talent. This is a big throw of the dice regarding your future image.

Somehow disloyal fool doesn't look so bad after all.

In conclusion, going after a talented, high-character player who might push your squad to another B1G title doesn't sound like that much of a program-crushing gamble.