The B1G game - the Spartan view and staff predictions.

Share All sharing options for: The B1G game - the Spartan view and staff predictions. 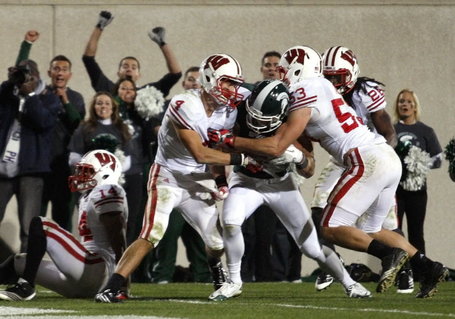 What if time stopped right here?

Well here we are. This is what expansimaggedon was all about, right? The B1G is finally playing during "Championship Week". We have the latest kickoff, so theoretically at some point on Saturday evening we should have the only college football game on TV.

It seems fitting that the two teams that tied for the B1G title last year (in the last year conference co-champs were possible) should play for the first undisputable, untie-able, unsharable B1G championship.

Settle in boys and girls, this is a lengthy one.

As I watched the October 22 match-up between Michigan State and Wisconsin, I was struck by how unfair it was that the game did not go to overtime. Don't get me wrong, I was extremely pleased that MSU was the victor, but, if I am honest, the ending didn't seem to settle matter. Good teams execute when it matters, for sure, but this was a classic heavyweight battle, one where the last punch landed wins.

It has to be said, that from approximately 1:30 minutes into the second quarter to about 5 minutes in the fourth was about the best I have seen MSU play this season. The offense clicked and the defense was absolutely ferocious. That team, that time, I would take against any in the country.

It also has to be said that Wisconsin, as good teams do, took our best shot and came back swinging. It appeared that they had the momentum if the game would have gone to overtime. Again, to be honest, I was fearful of what the outcome would have been in OT.

So here we are. Maybe this isn't the game that conference dreamed up when they created the divisions (as we keep hearing in the media). Maybe with the irrepressible Brady Hoke leading the resurgent University of Michigan (OMG - did you know Mattison took the 109th ranked defense full of Richrod rejects and turned them into the 16th ranked defense??!!) and the Ohio State University hiring Urban Meyer (OMG - Did you know he won two (2!!!) national championships and is from Ohio and that all his kids have the middle name Woody?!!!) this is just the place holder game until things get back to normal. Maybe this is the new normal.

Whatever the case, the two best teams in the B1G this year are playing for the title

Anyway. On to the staff predictions:

For the majority of this season Wisconsin has been able to do essentially whatever they wanted on offense, and their defense has been stellar too. In their 10 wins, Wisky is averaging 47.8 ppg, and giving up just 11.2ppg... that's an AVERAGE margin of victory of over 5 TD's in their wins. Even if you factor in those two losses, they still have a 4+ TD margin of victory. Those numbers are staggering. Coming from a MN fan this will sound crazy, but I'm actually disappointed Wisconsin lost two games this season because I think a potential BCS matchup of the Wisconsin offense vs the LSU defense would be fascinating.

In any case, Wisconsin is, at this moment, favored by 9, and I think they cover that. I believe Wisconsin wins 37-24.

On one hand, Wisconsin is exactly two minutes in regulation* away from a perfect season and a coveted spot in the BCS national championship game. They have a colossal offensive line, two consistent running backs that eat up distance in neat 3-4 yard chunks, and a silky smooth passer, who happens to be a legitimate threat with his legs. When these component parts are in sync, the Badgers are truly an elite power. Their only weaknesses? Strong and athletic defensive linemen who can disrupt their interior running game, and offenses that can take advantage of an average Badger secondary. Michigan State has both. As the Spartans showed in East Lansing in Round 1 -- which should earn game of the year honors -- they have the gravitas on the defensive line to manage Wisconsin's downhill running game. Introduce William Gholston into the equation and the effect should be even more pronounced. They also have a quarterback that can pick apart the Badger secondary.

So why am I still picking the Badgers? Because lightening very rarely strikes twice and Russell Wilson is an intangible that I don't think the Spartans can completely account for. It's a close game -- and if it's half as entertaining as the first one -- we're in for a wild Saturday night. But ultimately, the Badgers punch their ticket to Pasadena, where they belong.

Say this for MSU, they have exceeded everyone's expectation this season except their own. They beat Wisconsin earlier in the year when Wisconsin was looking like they were an all time great team, yet most everyone seems to just dismiss that as a fluke win. Why? They dominated Wisconsin for chunks of that game. Yes, Wisconsin came back...but so did MSU. And they won the game. I'm picking MSU, 27-24.

UW (a blowout – look at that shiny thing – have you seen my keys – I don’t have the remote!)

Wisconsin is 2 end-of-game plays (on the road, no less) away from, at WORST, being in the discussion for the #2 spot in the nation -- stop Braxton Miller from throwing a Hail Mary, and they beat OSU (seriously, how did that -- and by that, I mean Braxton Miller completing a pass -- happen?), and play a wee bit better on a Kirk Cousins Hail Mary and they go into overtime against MSU. (Credit where credit is due -- that game was tied, so even if Sparty's hail mary wasn't completed, the Badgers were facing a coin-flip odds to pull out a win in OT). Honestly, I think Wisconsin vs. LSU would have been a phenomenal game….but the Badgers didn't do well enough, so now we're all facing the Super Bowl of Oversigning, Part 2 - Electric Boogaloo.

Then again, Sparty managed to beat Wisconsin with Gholston sitting out a suspension….and they were clicking impressively throughout November.

My guess? Wisconsin plays with a chip on its shoulder over its earlier loss to Sparty, and avoids the mistakes (namely on special teams) to blow out the Spartans. There's just too much Montee Ball and too much Russell Wilson for Sparty to control the game a 2nd time. And it's just damn hard to beat a team twice in one year, especially when both teams are excellent (and let there be no mistake -- Sparty and Wisconsin are the CLEAR class of the conference, regardless of Michigan's 10-2 admittedly impressive record). Which, by the way, is why an LSU-Bama rematch is such a horrible idea (honestly, if Bama wins a close rematch on a neutral field -- are they really better than an LSU team that beat them AT HOME? Or is it just easier to get motivated for revenge? Conference title game rematches make some sense…but BCS rematches should NEVER happen if they can be avoided, and if OkState beats Oklahoma, they have a better resume than Bama in every respect, and deserve a title shot over a Bama rematch)

Sparty won the first matchup on a miracle pass to the end zone with no time left. That does not mean that MSU 'miraculously' defeated Wisconsin. Sparty got up in Bucky's grill, and proved that they could play with the 'preseason juggernaut' that everyone expected to roll through the conference (me included). That game along with the rest of the season, proved that MSU was a force to be reckoned with. There was a setback in Lincoln, but Nebraska seems to do that to pass-first offenses (Iowa nods in the corner). I firmly believe that MSU is the best team in the B1G right now, and they will put up a fight on Saturday. With that said, I think beating a team twice in the same season is damn near impossible, especially the way the last one ended. Aren't these Championship Games fun everybody!!!

At the beginning of the season, I was the only one who predicted this match-up in the B1G game. I picked MSU then and I see no reason to change my pick.

I'm going to the game. Probably the biggest MSU game I've ever attended in my lifetime. I honestly don't care what final score turns out to be, just that MSU is the victor and the inaugural B1G TEN championship game winner.

MSUlaxer27: But "On one hand, Wisconsin is exactly two minutes in regulation away from a perfect season " isn't correct. UW never led in the MSU game after 14:39 of the second quarter. Nor were they ever in a position with the ball to take the lead in the second half (unless you count the potential to go for two on their 4th and final touchdown of the game...that would have given them a 32-31 lead).

The hail mary prevented the game from going into overtime...if the pass was not completed UW would not have won the game.

Semantics, sure. Just tired of seeing the "two lucky" plays keep UW from the BCS championship game. The UW/MSU game this year was about as even matched a game as you could get.

Jon: You're right, but it did certainly feel like Wisconsin had the momentum down the stretch, and, with Wilson firing on all cylinders, I would have given the Badgers a slight edge in overtime.