The Absolutely, Positively, Last Thing I Will Write About Tatgate

Share All sharing options for: The Absolutely, Positively, Last Thing I Will Write About Tatgate

So yesterday's thread escalated quickly. I mean, it got out of hand. I felt like killing two or three posters with a trident, but I would've had to find a safe board, lay low for awhile, maybe stay in my mom's basement until it all blew over.

But as a proud SB Nation blogger, I already live in my mom's basement, so that would've required me to go out and socialize with people. Fuck and that. So I issue this disclaimer before we continue:

I think this site is unique for a couple reasons--it's conference, not team specific, and it has a pretty large audience. Some team sites draw huge audiences, some conference sites talk about everyone, but we do both pretty well. So I'm going to ask, without calling out anyone by name, that everyone keep in mind a couple things before posting here:

1) This isn't your team's blog. Whatever your opinion is on your team and what they did or didn't do--on or off the field--expect a lot of differing views. If someone disagrees, that's cool, and should be expected. Don't get butthurt when your opinion isn't the majority one.

3) Most people are pretty good at this, so this is directed for the 'one in every crowd' guy/gal: there's no place for personal insults. Disagree with the opinion without being personally insulting.

I am glad that Tatgate over. I'm as sick of writing about it as you are reading about it.

Now that this is finished, I want to take one last look at this, and see how this affects OSU and the B1G overall, because this will have long and short term implications for OSU and the conference at large.

And then I will speak of this no more. I agree it's time to move on, but I hope you don't feel I'm still killing the horse here.

Let's look at some things that come out of this, after the jump. 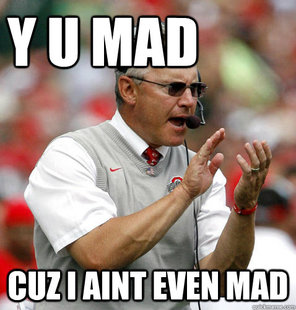 All things considered, I ain't even mad, bro

OSU AD Gene Smith needs to resign: I have to say, I was surprised that OSU got the one year bowl ban. But in retrospect, I'm surprised that I was surprised. It was my own fault for putting my faith in anything Smith had to say regarding this scandal, as he has been one to two steps behind this from the very beginning. Since this broke last December and he proclaimed 'I'm confident that nothing else will come of this' to that disastrous press conference with him, Jim Tressel, and G. Gordon Gee, Smith's handling of this has been amateurish, at best. The capper was a self assuring arrogance telling anyone who would listen that the added Failure To Monitor Charge with the DiGeronimo stuff wouldn't affect the final ruling. The Failure To Monitor is a direct reflection on Smith and his office, and the University as a whole, and he needs to step aside.

Oh, one thing about going to a bowl this year. I can't fault Smith for not imposing a bowl ban this year, as there is no way of telling if that would have been sufficient for the NCAA. They might have slapped down a bowl ban next year anyway, and he made a good case that a lot of seniors on this team that didn't have anything to do with Tatgate fought through a lot of adversity to get to the Gator Bowl, and they should be able to go. On that, I agree with him.

On, Wisconsin!: Quick, name a team in the Leaders division that can contend with Bucky next year. Sure, OSU theoretically can, but the bowl ban also means that they can't participate in the conference championship game if they were to qualify, so they're out. Illinois? New coach, losing a lot of talent, and they weren't as good as we thought, anyway. Penn State? Their problems make Tatgate look miniscule in comparison (hint: they are miniscule in comparison), and there is no Urban Meyer-type coach to come in and save the recruiting class while propping up a fanbase that's been kicked in the guts. Purdue? Decent team, but not at the level of Wisconsin. If Indiana is a serious contender for the Leaders division next year, that means the Mayan Apocalypse is, in fact, real. And at that point, football will be the last goddamn thing on my mind.

Recruiting: There is no denying that Urban Meyer has had an immediate impact on the recruiting trail, getting several 4 and 5 star recruits to either flip, commit, or re-commit to OSU in his short tenure as coach. I don't sit in the living room when Meyer gives his sales pitch to a recruit, but I'm sure part of it was along the lines of 'don't worry about the sanctions, they aren't long term'. Was he right? If he said that, yes. If he said 'we aren't getting a bowl ban', then he could potentially have an issue. Fortunately, it looks like he said something like the former, as every big name recruit Meyer has landed has reaffirmed that they have not changed their mind regarding their decision. At least today. However, it might stunt some of the momentum that OSU had up until this point, and it could open the door for other B1G schools and give them a leg up on kids that haven't made a final decision. And as indecisive as kids are, combined with the way out of proportion attention we give them in regards to where they decide what college they'll attend, it wouldn't surprise me if somebody does flip away from OSU.

Stop with the 'AP National Championship' Crap: One of the rallying cries I've heard coming from the 'Birther Truther' wing of the OSU fan base is 'well, let's just go out and win the AP National Title WOOOOOOO'. That's stupid, and unrealistic. If there's any positive that comes out of this, at least for Meyer and the team on the field, it's that they'll be able to play loose, with no expectations, for an entire year. Hopefully, it will allow Braxton Miller to learn and grow under the tutelage of Meyer, and will give them some serious momentum for 2013. Some of these highly touted kids he's recruiting he'll be able to redshirt if he wants, and with no pressure of chasing a title of any kind, I think it might help speed the development of the young talent he is amassing in Columbus.

If there's one downside to the Meyer buzz, it's the unrealistic expectations some OSU fans have put on him in year one. He has a hell of a resume, so I can understand where people are coming from, and although he's currently dealing with the off the field legacy of Jim Tressel, he also has to live up to the on the field one, too. And that's as much of a gorilla as the off the field stuff has become. Tressel's 10 year run on the field will be tough, if not impossible, to replicate. This helps give him a running start towards 2013.

Whither future law breakers? A lot of people are saying that the NCAA 'sent a message' by giving OSU a bowl ban for next year, and I agree to an extent. What does the future holds for North Carolina, South Carolina, and Miami? Miami and the Carolinas could be in for a serious smackdown, if this is in fact the new bar for the NCAA. What will the NCAA do to Penn State? As for them, I honestly don't think they should get involved. The NCAA investigates cheating in an academic environment and how that cheating affects athletics and maintaining a level playing field for all schools.

What's going on at Penn State is something that is way, way beyond that, and I think it's out of the NCAA's firing lane. That should be reserved for the courts and law enforcement, and the NCAA should steer clear. But hey, that's just my opinion.

Those are fair questions, but as a Buckeye fan I'm worried what happens if OSU gets into trouble again while on probation. If this is the new standard, any mis-step makes you think they will get absolutely hammered, and USC-like sanctions would be imposed. Stay out of trouble, okay guys?

But at least it ends. Thanks for reading.