Share All sharing options for: The B1G Holiday Letter 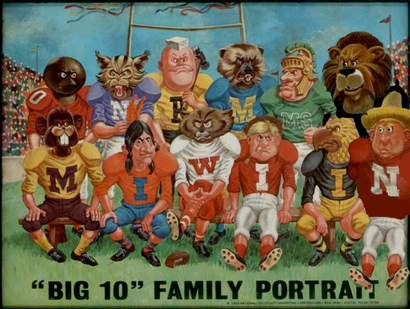 Wow, has it been a year already? Where has the time flown? It's been a hectic year here in the B1G household, and we've seen a lot of things transpire since this time last year. I hate these holiday letters as much as everyone else, but with soooooo much to do at this time of year, it's the only way we can let everyone know how things are going and what we're up to. I hope you don't think it's too impersonal, and we hope you understand.

Indiana is starting to worry us. He still isn't growing like he should, and although we've given him the experimental Wilsonus growth hormone, it doesn't seem to be working. Kids smaller than him beat him up on the playground, and it seems he's farther from walking on his own than ever before. We've spoken to doctors and specialists all over the country, and if our little Hoosier doesn't improve soon, we're going to enroll him into the Medical Assistance for Children program, or MAC for short, to try and get him the help he needs. We're too embarrassed to take him on any of our traditional post Christmas trips this year.

Purdue is just our plucky little survivor. We took him to the doctor about his knees earlier in the year, and the doctor fitted him with some nice braces. That didn't stop other kids from picking on him early, but he just had some Marve-lous resiliency and just wouldn't quit. We're so proud of him that we're taking him to Detroit in a few days. We don't have the heart to tell him that Detroit really isn't a reward, but it's all we could afford and we don't want to burst his bubble.

Illinois has been such a disappointment for us this year, but we still love him anyway. They looked like the best of our wacky bunch early on, and seemed poised for great things. We had scouts showing up from the BCS, and his mother and I thought he was really heading for big things. Then Illinois forgot basic potty training basics, and shit all over himself. And he just couldn't quit shitting himself--for six weeks! It turned out he had a serious case of Zookluenza, and although we think he's fully cured now, one of the after affects is that he is starving all the time. We've heard of a program in San Francisco that fights hunger, so we'll be heading out there shortly to investigate that.

Northwestern was pegged to be our prodigy this year, but maybe we put too much pressure on our little wildcat. They've been such a 'special' program for so long that we thought it was time for them to grow up a little bit, and see what life would be like by integrating them into normal college football society. Yeah, it didn't go so well early on, and we feared we had done Indiana-like damage to them. But they rallied, and we're so proud of them we're taking them to Texas, but we have to take the car to Meineke and get the oil changed first.

Michigan State is all grown up now, and we couldn't be prouder. He still is a klutz and stubs his toe every now and again, but it's nothing like it was 6 or 7 years ago. Back then, it seemed his toe was always broken, but now, it only happens once or twice a year, and they're understandable, except when they ran into the kicker. That was dumb. As much as we love how Sparty has grown this year, we had a disagreement on where he should go on his end of year trip. He wanted to go to Pasadena, but he acted like such an ass when we went to Indianapolis, we settled on Tampa. He's kind of pissy about it, though. He insists it's not that Tampa is bad, but he deserved Pasadena. His mom and I think he's still worried about going back to Florida, though. He got beat up pretty bad the last time he was there.

Michigan has been such a good boy this year! We were so scared that when he contracted RichRAIDS he was going to die, and he damn near did. Those three years were awful, and after consulting with several doctors who ultimately decided to not take the case, we found a man up in Michigan that did. He's from Ohio, but he has healed our spunky little Wolverine in record time. They have their old swagger back, and deep down, that's good to see. We're so ecstatic that after we drop off his little brother in Tampa, we're treating him to a special trip to Miami New Orleans. Just don't tell Sparty, or he'll get REALLY pissed.

Ohio State Well, we're happy to report that Ohio State has been released from jail! Oh, that's right, we haven't spoken since this time last year. It seems that they got into some trouble, and the law caught up with them. They never could tell us where they were getting all these tattoos, and it turns out their babysitter knew all along and didn't tell us. They're on probation for awhile, but we fired the sitter. If we have any say, he won't work in the babysitting business for at least five years. We really, really like the new sitter for them, and we think he'll do a good job with our Buckeye. We're sending them to Florida this year, but if we hadn't already gotten plane tickets, they wouldn't be going. We decided that next year they aren't going anywhere, regardless of how good they behave.

Nebraska Yes, that's right...we welcomed a new member of the family this past year! Cornhusker is such a good kid, and he's taken to his new house like a fish to water. We had seen him from time to time over at the Beebe house, but he was so miserable over there your heart just broke for him. So sad and alone, his family left him for Texas time and time again. Finally, we had enough. We called Child Protective Services, got temporary custody, and in July the adoption was official! We're so happy, and we love him just like he was one of our own. He's taken well to his new house, and he seems to be fitting in perfectly with his new brothers.

Wisconsin Once again Wisconsin is our top son. He just stood head and shoulders over everyone almost all year long, and when we took him and Sparty to Indianapolis, his behavior was classic. And as proud as we are of Bucky, we can't help but feel a little disappointed. Oh sure, we are happy to take him to Pasadena; it's our favorite place in the world. But we took him there last year, and we were expecting a little more. We can't help but think that if he had applied himself a little bit more, and studied a little bit harder, he might have achieved even more.

Iowa We're not sure what's wrong with Hawkeye this year, but something's been amiss almost all year. He insists he he's okay and there's nothing wrong, but we can't help but think he's going through a little rough spot right now. But ever the stone faced stoic that he is, he insists that everything is fine. Frankly, we're a little worried about him and we hope his trip to Arizona will help give him some insight on what's wrong. But we're afraid he'll come back more beat up than ever.

Minnesota We're not sure yet, but we've seen some hopeful signs that make us think Goldy is getting better. They are fleeting, and they are still fighting the affects of that particularly nasty case of Brewsterbifida they developed, but we think we're in the process of Killing it. A 12 play TD drive here, a defensive three and out there, and an occasional big win. But there are still too many WINFIGHTTRY moments to say they've been cured, and the chance for a relapse is very real. But we're hopeful, and we're keeping him home this year to make sure he rests and gets better.