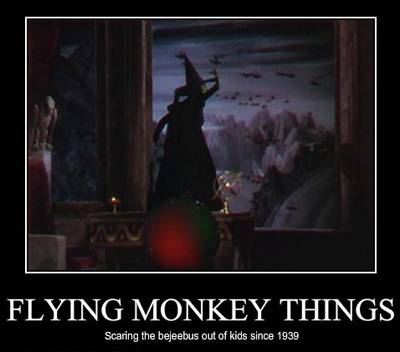 Well kids, we've reached the end of the Yellow Brick Road and arrived at Emerald City, also known as Indianapolis. Along the way, Wisconsin and Michigan State have had to face and overcome all kinds of obstacles short of flying monkeys to get here.

Speaking of which, did those flying Monkeys from The Wizard Of Oz scare the holy hell out of you when you were a kid as much as they did to me? I mean man, talk about nightmare inducing memories...kind of like last minute Hail Marys *coughWisconsincough* or Rex Burkhead *coughSpartycough*.

But just like Dorothy and her gang of flawed lieutenants, MSU and Wisconsin persevered and are now just a visit from the Wizard before they are declared whole and awarded a Rose Bowl. For MSU, they need to do what they did in the first game, except do it for a full 60 minutes, not 55. Keep the Badgers offense off the field and off balance, and put the game on the broad shoulders of Kirk Cousins and the rest of an experienced senior class.

For Wisconsin, revenge has to be coming in to play here. You have to wonder if they pull out the MSU game, do they repeat the relatively listless performance against OSU, or do they put their foot on the gas, take care of business and roll to the cusp of the BCS title game? We'll never know, but it's an interesting question.

I predicting an MSU win, 27-24. Either way, I really don't see a blowout, like some folks are calling. These are two very good football teams that have earned their division titles and subsequent berth in this inaugural game. These are the two best teams in what will always be the best conference, and this is great for the Big Ten and her legion of fans.

But the time for talk has ended. It's almost game time. Although only one can win, good luck to both teams; may you both play your best and not get any injuries.

If you're new here, welcome. We've only got a couple rules, so consider this our legal disclaimer. We have a pretty hefty legal department here at OTE, so don't cross us on this: No racism, sexism, homophobia, pornography, personal attacks, politics, religion, or illegal Internet streams of any of the games. 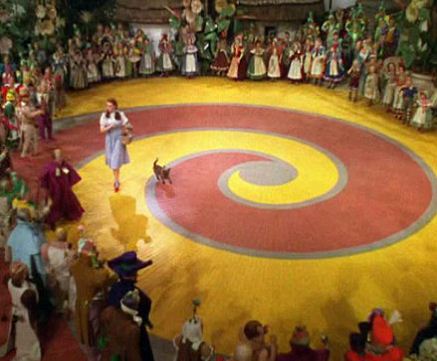 Seriously, where the hell does the red brick road go?

Speaking of the lawyers and the Wizard of Oz, they're in the other room discussing where the Red Brick Road would've taken Dorothy. Some think Lincoln, Bama is insistent upon Tuscaloosa, Hilary is making a persuasive case for Madison and has baffles to get people to her point of view, and Jon is the lone Columbus holdout. Graham, Hilary, Chad, Paterno Ave. and Bama Hawkeye counter that there were no tattoos in Oz, so his theory can't work.

Jon counters that it leads to Urban Meyer's House.

Enjoy the games, everyone!