As I kept drafting bowl pairings each week, someone would comment that the slate looked great for the Big Ten, and that this would be the year that we could see a a dominant conference performance. As the pairings were leaking out Saturday afternoon, I kept getting a more and more pessimistic feeling about the likely outcome. Then as I looked at each matchup again last night, I set my expectations at 1 definite loss, 2 likely losses, 4 tossups, 2 likely wins, and 1 definite win. If every thing breaks evenly, it's a .500 slate. If there's a wave one way or another we could see a 3-7 or 7-3 result. And yes, this is sounding more and more like we're awaiting election returns. On to the quick reactions:

This is our definite win. That's right, .500 Purdue is my lock. I realize that there is no excitement in a trip to Detroit, but this is a good matchup for the Boilers. They're playing a MAC team that isn't even a top-tier MAC team. Should be an easy win by two scores as Danny Hope builds toward the 2012 season.

Let's be clear. Iowa has no business being on the same field as Oklahoma in bowl. The talent level is so wide that Rece Davis had to make special note of it as ESPN was announcing the bowl matchups last night. This is our definite loss. That said, since 2003, Iowa has played very well in its bowl games, including in a similar mismatch after the 2006 season, when the 6-6 Hawks were an illegal formation call away from beating 10-2 Texas. Maybe Iowa can keep it close, but to expect anything more would be unrealistic.

Quick note: If you don't know the story of Bob Stoops, expect to hear these tidbits during the broadcast: 1) He played safety for Iowa in 1979, when Oklahoma won the only prior meeting of these schools. 2) His father was buried in a Hawkeye jersey. 3) He interviewed for the Iowa job in December 1998, but was offered Oklahoma's position before the Iowa committee reached its conclusion. Iowa would end up hiring Kirk Ferentz.

I have this as a likely loss, although it will depend upon the fourth quarter. If football was a 45 minute sport, Texas A&M would have been a 10 win team. Unfortunately for the Aggies, Arkansas, Texas, Oklahoma State, et al, continued to play for the full duration of the game. I don't like this matchup for Northwestern's defense, and it will come down to whether the 'Cats can score enough to stay close. In the end, it's Northwestern in a bowl game. Don't count on a win.

Quick note: These teams have never met, but are two of the six BCS conference teams that have not won a bowl game in the last nine seasons. The last win was the 1948 Rose Bowl for Northwestern and the 2001 Galleryfurniture.com Bowl (that's an old name for this same bowl game) for Texas A&M.

Illinois is really lucky. Look at the things that have gone right for them in this past week: 1) They fired Ron Zook. 2) They were bypassed by the Pizza Bowl in Detroit. 3) They talked their way into a bowl game in San Francisco. 4) They drew an opponent who also fired a coach, is no more talented, and is equally as dysfunctional. I have this as a toss up, because - well, count on Illinois at your own peril.

Quick note: We mentioned the Rose Bowl whooping that UCLA put on 1983 Illinois before the season, but the teams have played three times since then. Illinois lost all three - the first two by identical 6-3 scores. 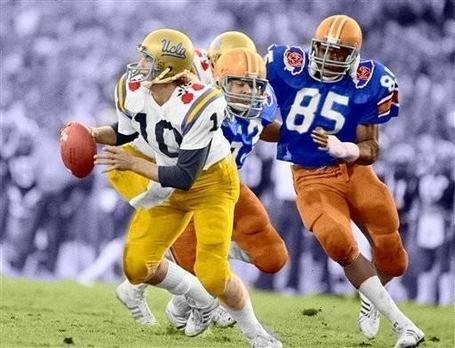 That QB won't be there to coach is alma mater against that same opponent.

Who are bowls really for? If they're for the administration, Penn State may have well deserved a game played in Hell. If they're for the players, Penn State got screwed. I'm in the latter camp, and I think it's absolutely horrible that the Lions players who committed to Penn State a decade after Jerry Sandusky stopped coaching at the school are being punished for his (and his superiors') sins. All of that said, Penn State will have the first hour of Day After New Year's Day all to the themselves to face a team that was a bed-wetting away from the Sugar Bowl. They should have been facing Oklahoma, but it could have been a much worse draw. I have this as a likely win.

What a great matchup. Unlike when these teams met three years ago, this feels very even. Two very good, but flawed, teams that should have a close bowl. I'm very excited for this one, and have it rated as a toss up. The big question will be whether both squads will show up after their Championship Game losses. If it's harder to get over a heartbreaker than a blowout, that may not bode well for Michigan State. As it is, I've got this as a toss up.

Quick note: These teams will be meeting for the third time, all in bowls, all in Florida, and all in different cities (Jacksonville, Orlando, and now Tampa).

Are all 6-6 seasons the same? For some reason, I feel like Florida is really a 6-6 team, while Ohio State is an 8 or 9 win team. Yes, I know that you are what your record says you are, but I think that these teams are not as even as their records indicate. When Ohio State played good teams, they won one and kept others close. When Florida played good teams, it got ugly. I have this as a likely win. I also think that this is the last time that you'll see Ohio State picked sixth in the B1G selection order for a long time.

Quick note: This is the only Gator Bowl preview that you'll read that did not mention his name.

Why is it that I don't believe in South Carolina? They beat ACC Champion Clemson. They beat SEC East Champion Georgia. But that's it. They got rolled by Arkansas. They lost to a very average Auburn team. I get that the SEC has the two best teams in the country, but the Gamecocks didn't play either of them. I have this as a tossup, but if I had to pick right now, I'd be leaning toward the Huskers.

Quick note: Ohio State is the only Big Ten team that South Carolina has ever beaten in a bowl game. They did that in back-to-back years in 2000 and 2001. 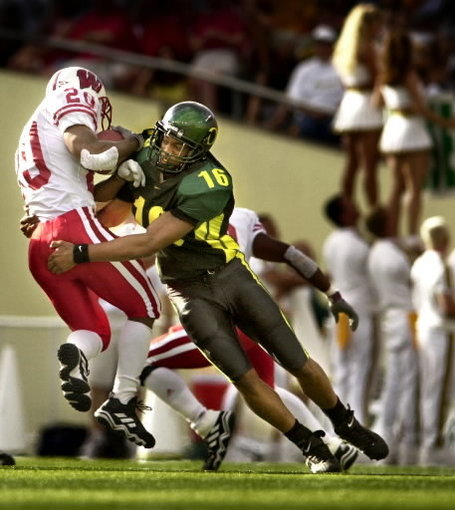 When Wisconsin played Oregon in 2001, the Ducks looked like this.

I don't like this matchup at all. If the Badgers were playing Stanford, I think that they could dominate them. But against Oregon? I just think it's not a good matchup. Watching green jerseys loose in the Badger secondary during the B1G Championship game may have been foreshadowing for the Rose Bowl (presuming that Oregon isn't wearing new Nike jerseys in Silver, Fuchsia, and Orange). I have this as a likely loss with a retro-80's Rose Bowl feel.

Quick note: Wisconsin was thought to be too big and slow to stay with the Pac-10 champions after the 1993 and 1998 seasons, too. They won both of those games.

I still don't understand why Virginia Tech was chosen over Kansas State. In the end, it's a good matchup for the Wolverines. This is not a vintage Hokies defense, and when they have been confronted by playmakers with speed and athleticism (see: Clemson), they have crumbled. On the flip side, I do worry about Michigan's defense against Logan Thomas. It's enough of a concern for me to think of this as a tossup.

Quick note: These schools have never played. Both have been to the Sugar Bowl before, though. Most recently, 2004 Virginia Tech lost to Auburn and 1983 Michigan lost to Auburn.