Share All sharing options for: Bad(ger) Manners - Are Buckeye Fans Really More Boorish Than Your Fans? 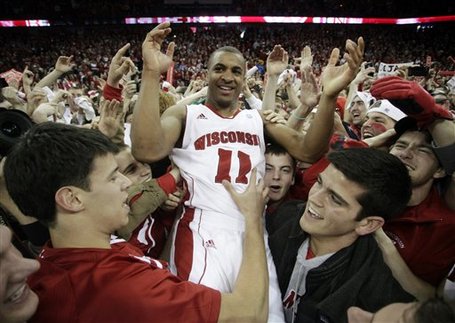 Obnoxious.  Insufferable.  Classless.  These are all words I've heard used to describe Ohio State fans by the rest of the Big Ten, and to some extent you've got a point.  Buckeye fans are some of the most arrogant and entitled in all of sports.  There are few fanbases across the country that would boo an 8-1 team in November with a Heisman-trophy contender at the helm, but that's exactly what Columbus residents did as the Buckeyes jogged to the locker room down 11-points to Penn State at home.  (Don't look at me, I didn't join in, but I suppose that means I can't take credit for the dramatic turnaround: 35 unanswered points in the second half).

There are even fewer fanbases that would call for the head of a head coach with a 75-16 record and a national championship.  But that's exactly what a number of Buckeye fans did in the wake of a 35-3 loss to USC in 2008.

There's no question that Ohio State fans have unreasonable expectations, and like every fanbase there are a handful of bad apples.  (If you're from Pataskala and have never set foot on a college campus as a student in your entire life, but drive downtown every Saturday to binge drink and pick fights, I'm talking to you).  But do Buckeye fans really deserve to be considered a step below the rest of the Big Ten when it comes to good sportsmanship?

I can't answer that question, but what I can say is that I've been attending Buckeye sporting events for almost two decades, and I've never seen Ohio State fans throw urine filled water balloons at an opposing band like Penn State fans did in 2005.  Or pick fights with other Buckeye supporters because they brought a friend wearing a rival's colors with them to a game like Michigan fans did in 2009.

Never have I seen Ohio State enthusiasts throw anything on the field, but that's not true in Madison where fans lob pennies encased in marshmallows at opposing football players and pour drinks on players as they walk into Camp Randall stadium.

Nor have I ever seen an Ohio State fan spit on anyone from an opposing team, but apparently that happened twice over the weekend in Wisconsin's Kohl Center.  Sure, nothing's been proven, but I can't remember the last time someone even accused an Ohio State fan of that kind of boorish behavior.

The lamest thing I've ever seen/heard our own student section do is chant a certain slang term for the female genitalia (Hint: It begins with a "P") at USC's Taylor Mays when he briefly got injured during a 2009 clash in the Horseshoe.  To be sure, it's not cool to mock an injured athlete.  But that's not much different than impugning a player's sexuality, as the Wisconsin student section did on Saturday to Ohio State's Jon Diebler by chanting "Diebler swallows" repeatedly when the guard was at the foul line.

Are Buckeye fans perfect?  Hell no.  But on the whole, I don't see a ton of differences between your sophomoric conduct and ours.

So go ahead, pretend like your sh*t don't stink.  But remember, it takes one to know one.