Okay, So You Don't Really Like Me Then? Another Look at the Big Ten Teams We Love And Hate

Share All sharing options for: Okay, So You Don't Really Like Me Then? Another Look at the Big Ten Teams We Love And Hate

When I wrote up the summary of our writers' primary and secondary allegiances, I never imagined it would get the response that it did. Our community here on Off Tackle Empire has grown by leaps and bounds over the past year, but it was really great to see such conversation generated by such a simple question.

Beyond people responding to my request for their own allegiances and hatreds, we had a lot of really interesting theories being tossed around as explanations for why exactly our original graphs turned out the way they did. Turns out I'm just about the only person on the planet who was surprised that people hate Michigan. Guess I came late to the party on that one. Sorry, guys.

Er, anyway. I waited a while after the comments went live on the original article, because I wanted to get a decently accurate portrayal of our fan community. Or at least, those of you who like to vocalize your fandom. I'm sorry I'm not representing you mutes out there, but what do you want me to do? I'm a law student, not a mind reader.

After we passed 200 comments on the story, I decided that it was a decent enough time to gather data. So I went in to the comments and tried to, as best as I could, catalog all the various declarations of undying love and undying hatred. And the mere annoyance too. Some of you wrote your opinions in unorthodox fashion, but I included all of it to try to get the most realistic picture possible. For that reason, the totals on the various graphs don't completely align. Many of you named multiple secondary teams - both those that you liked, and those that you didn't. All of that was taken into account for in these graphs.

If I let the comments simmer like a good sauce for a few more days, we'd probably get an additional smattering of information, but I'm slightly impatient like that. So let's get to it, shall we?

Okay so, just like in the last article, we'll start with the primary allegiances. Here's the graph of our community (without our writers included): 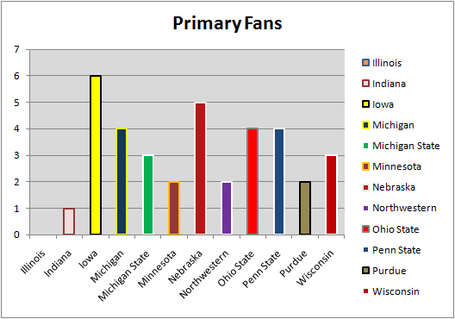 Every single school in the Big Ten, except for Illinois (hellllooo? McFly? Anybody home?), is represented in our community. Some schools, like Iowa, are more represented than others. They could be considered the social butterflies of the group. Or the loud ones. Even newcomer to the conference Nebraska makes a good showing in this regard. Welcome, guys! It's nice to know you're here already - tell your friends!

On the other side of the ledger, Indiana, Northwestern, Purdue, and Minnesota are the least well represented teams. At least in primary allegiance. But, at least for the Hoosier teams, unlike in our graph of writers, they do in fact have fans, solving the mystery of whether the state of Indiana actually exists or not.

Also interesting from this first chart is that we have the exact same number of primary Michigan fans as primary Ohio State fans. Hmm. I guess the online community here is more evenly split than our distribution of writers. Wisconsin and Michigan State are also well represented, though less so than the previous four teams, sort of conforming to what our comment sections have looked like lately.

So, who gets the secondary allegiance votes? And, what about all that burning hatred? Well, click past the jump to find out...

Okay, so now it's time to look at secondary allegiances. This one was really interesting for me after I tabulated the results. Sort of unexpected. This time we do in fact have every team in the conference represented, at least a little bit. Even lowly Illinois. Kind of like in our writer polls, Penn State, Wisconsin, and Iowa got a lot of secondary love. It seems that many people find things they can respect about those programs, even if they aren't educationally or geographically linked to those schools. Nebraska also got a decent amount of love, though one wonders if that will change after we start playing games against them. 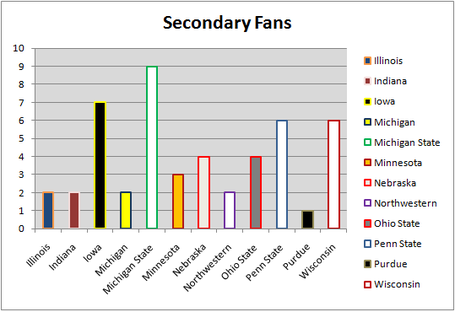 Ohio State appears to be more secondarily loved than Michigan, though not by a whole lot.  And Minnesota is right up there with the two of them also, which is really unexpected. Maybe people just find that bucktoothed rodent less threatening? And kind of cuddly?

By far the most surprising result, though, was that Michigan State took him the crown for secondary allegiance. Given that we don't have a high number of dedicated Spartan fans on this site, I found that very interesting. I guess Sparty is sort of always a bridesmaid and (almost) never the bride...

Let the hate flow through you...

Moving on to those burning feelings coming from that sexually transmit... er... hatred. In terms of primary enemies, perhaps unsurprisingly, our community looks like this: 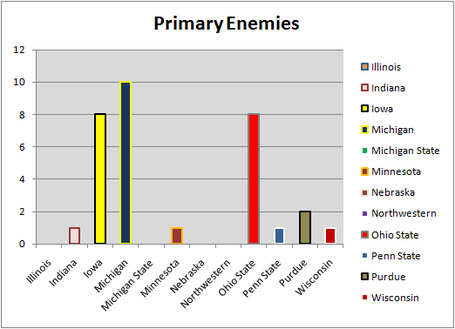 It's really not odd to see that Ohio State and Michigan are up there near the top. Those two hate each other reliably so, and even get some primary hatred from fans of other schools. I guess seeing Iowa top the primary hatred list was also surprising, but much of that seemed to be coming from Wisconsin and Nebraska fans. As well as the occasional Purdue response. I couldn't really tell if those OMHR responses were entirely in jest or actually meant, so I included them when they popped up anyway. Who knows, maybe Delaney will actually make it turn into a real rivalry...

The lack of primary hatred for Illinois, Michigan State, Northwestern, and Nebraska is not all that surprising either. Without any primary Illinois fans, Northwestern isn't going to get primary enemy status easily, and the same sort of goes for Michigan State, who sort of lacks a clear rival. Nebraska is new to the conference, and while they get a decent amount of secondary disdain, I don't think they've upset people enough yet to be considered primary enemies.

Next up, secondary enemies. Only some surprises here. 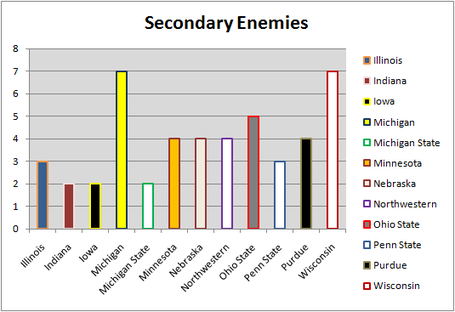 The hatred for Michigan, and to a lesser extent, Ohio State, is not surprising. The hatred against Wisconsin really surprised me, given the feelings of squishy love they engendered in our writers. Also, Minnesota? Illinois? Really? Okay, then. Like with secondary allegiances, pretty much everyone was represented with secondary hate. This sort of suggests that the conference is a rather complex web of feelings, rather than just binary oppositions.

So when you put it all together what do you get? Just as a reminder, the formula for this section is pretty simple. The number of primary fans a team has are multiplied by two and then added to the number of secondary fans. The same operation goes for the number of primary/secondary enemies. The two numbers are then combined. A positive rating indicates that, of our respondents in the community, more people like the team than dislike them (whether that's in a primary or secondary fashion). A negative rating is just the opposite. So, here's our little graph of total fan factor from our community: 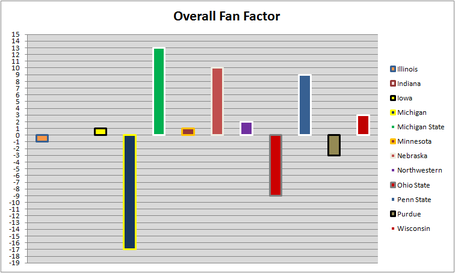 Much like with our writers, Michigan is the most negatively viewed team across the readers of our site. Not far behind, though, is Ohio State. Apparently the number of dedicated Buckeye fans we have on this site couldn't save OSU from the torrents of secondary enmity directed their way. Oddly enough, Purdue also has a negative opinion (partly from an Indiana fan or two, and partly from some of those OMHR comments that may or may not have been serious). Illinois was also disliked overall, but just by a little bit.

Well, there you have it. This is what the community of OTE looks like right now. Because we have the new entrant of Nebraska coming into the conference, I have a feeling this series will make a return at some point next year. It'll be certainly interesting to see if the performance of the Cornhuskers, or any behavior (good or bad) on the part of their fans influences the perception of them across the conference. Or if they develop new opinions about the rest of us...