Share All sharing options for: How Ohio State Athletics Flunked the Bar Exam 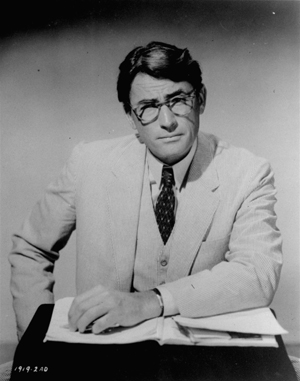 Mr. Tressel, Mr. Smith, Mr. Gee....I think you could use my services.
(Picture from "To Kill A Mockingbird")

At one point, this site called itself "The Rivalry, Esq."  Now that may be a name no one would self-apply where you come from. But then there was a lot about The Rivalry, Esq. that didn't make a whole lot of sense.  Anyways, The Rivalry Esq. is not the preferred nomenclature anymore. Off Tackle Empire, please.

At one point, however, this site prided itself on a volatile mix of Big Ten football analysis, pop culture references, and, yes, legal research.  Given Ohio State's recent "situation," it only seemed appropriate to return to those roots, and show you (after the jump), exactly how much went wrong from a legal perspective in Columbus....

(And since this is a legally themed post, a disclaimer: this article is merely the opinion of its writer, and does not and should not be considered legal advice in any way. If you have legal questions, call an attorney in your state.  If you just want to play airchair attorney in regards to Big Ten football, read on.)

Let's begin our analysis with this saga's very own Deep Throat: Christopher Cicero.  As reported here and here, Christopher Cicero is a former Ohio State walk-on linebacker who lettered at Ohio State in 1983 when Jim Tressel was an assistant at Ohio State under Earle Bruce.  Cicero also happens to be the "anonymous lawyer" who blew the whistle to Tressel in emails in April 2010 that a federal drug trafficking investigation of tattoo parlor owner Eddie Rife had revealed that players had sold or traded Ohio State memorabilia to Rife and others for cash or free tattoo inking.

Now, ignore for a moment Cicero's allegedly checkered ethical past as a lawyer.  Was it ethical, legal, or proper for him to email Tressel about the players?

Looking at the emails there may be some potentially serious violations of legal ethical standards (yes, believe it or not, lawyers have ethical standards).  In the first email, Cicero claims that "a lot of my friends are in law enforcement," and implies that such "friends" are the source of his information regarding the Ohio State players.  If Cicero is receiving leaks from federal law enforcement about an active case -- or worse, has information regarding a grand jury investigation (and to be clear, there is no indication that's the case here) -- those law enforcement agents and/or Cicero might be committing a crime by revealing the facts of their investigation to a third party.

But in the second, April 16, 2010 email, it's clear that is not the case -- Cicero says "I had Eddie Rife in my office for an hour and a half last night" followed by the now-infamous "What I tell you is confidential."  And then Cicero proceeded to tell Tressel preciselywhat Eddie Rife told him about the players, the merchandise, and the sales/tattoo trades.  The implication?

Eddie Rife was Christopher Cicero's client.  And Cicero was revealing privileged attorney-client communications in violation of his ethical and legal duties by speaking to Tressel.

Think I'm crazy? Check email #3 from April 16, 2010 at 2:24 pm -- Cicero states that Rife "is in really big trouble.  The federal government has told him that his best offer is to take 10 years in prison.  He wanted my opinion yesterday on his situation" (emphasis added).  So Rife went to Cicero, an attorney, provided Cicero with information about his case, and wanted his legal opinion on the situation.  Can there be a more cut-and-dry attorney-client relationship scenario?

Under Ohio Ethical Rule 1.6, "A lawyer shall not reveal information relating to the representation of a client, including information protected by the attorney-client privilege under applicable law, unless the client gives informed consent."  Unless Rife gave Cicero informed consent to talk to Tressel, Cicero has violated this ethical rule. Cut and dry.

There are, however, exceptions that may apply, that Cicero could claim permitted him to talk to Tressel, but they don't seem to hold water.  Rule 1.6 allows attorneys to reveal client-confidential information "to prevent reasonably certain death or substantial bodily harm" (inapplicable here), or "to prevent the commission of a crime by the client or other person" (while NCAA violations are serious, they are not "crimes" in the sense embodied by the rules).  In other words, Cicero may be a whole lot of trouble for giving Coach Tressel a "heads-up" on the situation.

(That single-handedly wins the award for "least-likely sentence I thought I'd ever write as an Off Tackle Empire blogger.")

Say I came up to you and said: "Hi, I'm an attorney for B1G Bank. My client has been laundering money for the mafia and we're about to be indicted.  We looked at our records and realized your parents were late on a mortgage payment last month.  Since we need money for our upcoming legal defense, the bank is going to foreclose on your parents' house and sell it for cash. But shhhhhhhhhhh! Don't tell them! It's confidential!"

Under what scenario would you actually consider that confidential?

Answer: it isn't confidential -- of COURSE you can tell your parents their house will be foreclosed (or, in Tressel's case, tell his athletic department's compliance officials that players were violating NCAA rules).  The attorney-client communications privilege requires (a) a client (or potential client), (b) an attorney, and (c) communications between them either seeking legal advice or providing legal advice.  And only the attorney is required to keep those communications confidential -- clients control the "privilege" and can choose to waive it (intentionally or inadvertently) by talking about otherwise privileged communications with third-parties (and boy do lawyers hate when clients do this).

Here, (1) Tressel was not Cicero's client; (2) Tressel was not seeking legal advice from Cicero; and (3) Cicero was not providing legal advice to Tressel.  There was no "confidentiality," at least in a legal sense, that Tressel had to respect -- he was perfectly free to bring this to Gene Smith, Gordon Gee, or any of Ohio State's lawyers.  And even if there was any "confidentiality," Tressel would be the only one free to break it -- only Cicero in this whole scenario seems to be violating the attorney-client communications privilege (and only then violating it in regards to his communications with Rife).

Lesson #1 for all of you from an attorney: emails never die.  They never disappear.  They never go away.  Don't write ANYTHING in an email that you wouldn't be fine seeing in a deposition in 10 years.

Why does that apply to the Ohio State case?  Because it appears that Ohio State's compliance officials or attorneys never uncovered these emails when the initial investigation regarding the players occurred in December. And that is a huge problem.

How is that even possible?  The first thing I would do, as a lawyer, after learning about the violations and the players' alleged connection to Eddie Rife (and knowing that the NCAA would be asking "Did you know about this? When did you know about this?") would be to search all of the emails of the football coaches and athletic department for the name Eddie Rife.  Or for "tattoos."  Or for "selling merchandise."  That's basic due diligence and litigation discovery 101.

A search of Jim Tressel's email for "Rife" would have easily turned up Rife's name in these April emails.  So was such a search ever done?

If not, then Ohio State's compliance officials and attorneys are failing the institution -- it's their job to seek out the truth (however ugly) for their client, and then once they know the truth, defend Ohio State to the best of their ability.  If they never searched the emails, they failed their client.

On the other hand, if they searched the emails (and it seems astonishing that they didn't -- an NCAA investigation is a pretty big deal), they would (with almost 100% certainty) have found this information.  And yet, when the NCAA came calling, and asked if anyone at Ohio State knew of the merchandise sales/tattoo trades, Ohio State said nothing.

And that, my friends, would constitute a conspiracy or cover-up, involving Tressel and Ohio State's attorneys.  In this one case, for Ohio State's sake and the sake of the Big Ten, I really hope the lawyers messed up, because the alternative dangerously approaches "lack of institutional control."