Some basic storylines for today's matchups, plus HERE is the latest SBN Bracketology predictions.

Penn State, bubblicious as usual and sitting in many "Last Four Out" brackets, have another chance to strengthen their chances for an NCAA Tourney bid with a win over Michigan State. The Spartans meanwhile, bubblicious for the first time in a bit, helped their chances tremendously by smashing Top 10 ranked Purdue and look to be a lock for the Tourney (Play-In games or Top 60 is yet to be decided). 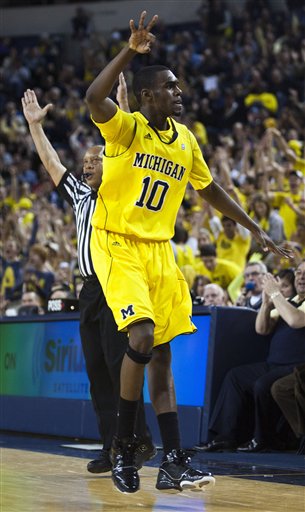 On the other side of the bracket, Michigan's three point shooting pushed them miraculously past a talented Illinois team and into a probable #10 seed. OSU survived Northwestern weakly, but their #1 seed credentials are still solid, loss to Michigan or not. So let's lay out some scenarios...

Michigan could push themselves even higher than a #10 with a monster win over a bigger, veteran Buckeye team. Joe Lunardi has been dropping Michigan steadily (down to a #12 seed yesterday), while SBN has Michigan sitting comfortably at a #10 seed. Winning the whole B10 Tourney could push the hothothot Wolverines as high as a #7 seed; an 11-3 season ending run plus a Tourney Championship are good bargaining chips. Losing today simply puts the Wolverines into that #10-12 seed range where they currently sit.

FINAL POINT: If MSU wins over Penn State and possibly Ohio State in the final, the Wolverines season sweep of State will start to look a bit better.

It's hard to imagine a bigger win than yesterday's defeat of Purdue. MSU looked physically ready to defend like...every other Spartan team since Izzo took over. Shotblocking, hands in face, etc. This was a different team than the Spartan team that got hammered by Matt Painter's squad at the Breslin Center just a few weeks ago. Combine this with the Tourney Committee's faith in Tom Izzo and MSU is IN.

But where? Losing badly to Penn State would hurt Sparty's momentum and move them away from an #11 and closer to the play-in games. Two more wins and MSU becomes, again, the team no one wants to face in March.

FINAL POINT: Will committee members take less stock in the Purdue win because the Boilers didn't really need this game? Or will the members view it for the thrashing it was?

At the beginning of the Big Ten Tourney, their were essentially four teams on the bubble: Illinois, Michigan, Michigan State, PSU. The Nittany Lions had the weakest resume according to...everyone. But a WW1-battlefield inspired victory over Wisconsin breathes more hope into PSU's chances. Weak early season performances can be pushed aside with another quality win over a Top 50 opponent. We all know that Penn State might need a win to sniff the Tourney. But let's say they get that win...The question remains: Do they need to win the whole thing to get in?

FINAL POINT: How will PSU attack Kalin Lucas, the Spartan PG who has been dialed into "kill mode" for more than a month?

Kansas, Pitt, ND, Duke, OSU, SDSU...maybe UNC....all in position to get a #1 seed. The Bucks have enough quality wins and lack of bad losses to make them a near lock. And they couldn't ask for a better matchup than against Michigan today. The Wolverines will have to wear themselves out to slow Jared Sullinger and his bulldozing inside play. Plus there's no way Ohio State shoots as badly as they did yesterday versus NW (32% from the field, 20% from three point land).

One could consider that a Michigan upset might knock OSU off the #1 seed line, but I doubt it. There would have to be a large number of things that ALL happen for OSU to move down (blowout Buckeye loss, plus Conference Tourney titles for all the above-listed teams still playing).

FINAL POINT: In their last matchup, Michigan led OSU for 30 minutes before succumbing 62-53. If OSU starts hot, it won't be so close.