The Only Colors is a just a monster blog with a great community. They came in a bit after OTE came to SBN so I feel a bond. My thanks to Pete Rossman, the genius who wrote this letter and who's taking the reins over at TOC.

I know you haven't seen us in eight years, but since you're joining the Big Ten I thought it would be nice to give you an update on the status of Michigan State.  To begin, we won a share of a Big Ten title last season! This isn't such a big deal for some schools but when your team is going on two decades without any sort of conference hardware it's a big deal.  There was a bowl game after that, but if you agree not to remember our performance this season, we'll agree to forget yours.

Anyway, there's a lot of talk this season about us and y'all being the frontrunners to win the Legends division this season.  You've probably received a lot of letters from Big Ten teams that can be summarized in five words: "We're awesome! Our rival sucks!"  I'm not going to waste space in this letter telling you about Michigan's ineptitude; their record the last three seasons does that for me.  What I will do is give you an insight to a good portion of the psyche of the MSU fan base.  Even though MSU is projected to do well in 2011, I can't help but feel a drop off is coming.

Yes, MSU went 11-1 last season (remember the agreement we made about our bowl games).  Yes, their losses are significant in some areas (linebacker and cornerback in particular), but the Spartans return all their offensive skill players minus one wide receiver. Yes, MSU will probably face a depleted Ohio State team in their Big Ten opener. Despite these facts, three factors stand in the way of a Legends division title.

Reason the first - the schedule.  Even though MSU faces OSU without Terrelle Pryor, Daniel Herron and others the game is still in the Horseshoe, which will be rough.  After that we face you guys in Lincoln.  That's two tough road games to start Big Ten play, and still have to go to Iowa and Northwestern. In addition we play Wisconsin, a Michigan team that will most likely be coached competently, and if the nonconference schedule comes into play, a game at Notre Dame.  That's not the cakewalk MSU had this season.

Reason the second - recent history.  Although MSU did go 11-1 in the regular season, it was one of the shakiest 11-1 seasons in memory.  Overtime was needed to defeat Notre Dame, and few remember how tight that game was because of how scintillating the last play was.  Fourth quarter comebacks were needed to beat Northwestern and Purdue.  MSU nearly gave up a fourth quarter comeback to Matt McGloin, a QB which made many Penn State fans long for the steady, efficient leadership of Anthony Morelli.  Did I mention how Iowa erased Michigan State?  A regression to the mean is likely,for this team, and that means losing some close games they won last season.

Reason the third - ancient history.  Here is the list of Michigan State football teams since 1990 that have had two stellar seasons in a row:

Although Mark Dantonio has done a lot to change this mindset, it still exists.  MSU followed up a 9-3 campaign in 2008 with a thoroughly mediocre 6-6 one in 2009.  We lost to CENTRAL MICHIGAN that year.  Michigan State has had its issues with success before, and a part of me wants to believe it isn't true.  Another part of me is stockpiling whiskey, MREs and ammunition in case of a dropoff. 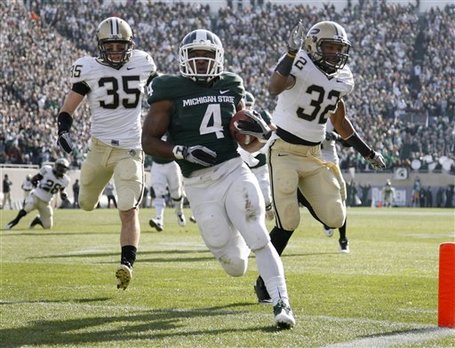 Despite that though, we're optimistic folk.  Even in utterly crappy seasons during the John L. Smith era we put 70,000+ fans in Spartan Stadium.  Most of our fan base has something you won't see in Michigan and Ohio State fans - a sense of humor!  Speaking of those two fan bases, if they start talking about THE GREATEST RIVALRY EVER IN SPORTS OR COUNTRIES OR LINENS AND THINGS, run the other way.  Run as fast as possible, because I don't know if it's possible for someone to be bored to death, but I wouldn't risk it.

As for East Lansing, you won't be here until 2012, but MSU tailgates are awesome.  Tailgates are on campus unlike some schools, so you can take in the full beauty of Michigan State in the fall.  Parking passes for some lots are a bit hard to come by, but there's plenty of parking for those who arrive early, and from there you can drink anywhere on campus.  It is glorious.  As for places to watch the game if you can't get a ticket (that shouldn't be a problem though - plenty of scalpers), I suggest Crunchy's (best beer selection in East Lansing). To be fair, any bar will do and they'll all be open; just keep walking north on campus and you'll be bound to find one.

That's all for now.  We're looking forward to playing you this season, and drinking all your beer at your tailgate, lest we label you impolite hosts.