Share All sharing options for: NCAA Tournament: Thoughts on the First Weekend, Sweet 16

Well. That was an intriguing weekend. Random subject generator firing up NOW...

Ha. See what I did there. Apparently there were 11 Big East teams in the NCAA Tourney and in fact, only two remain (Marquette, UConn). Although a couple pods ended up with Big East v. Big East, this was an embarrassing performance by the Colin Cowherd-anointed "Best League in America." Let me illustrate: 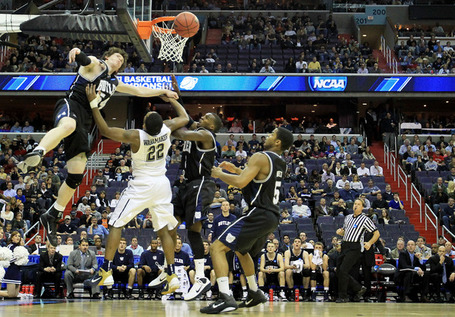 That's 7 teams that lost games they were favored in. Pitt...yeah. Notre Dame looked soft, Louisville looked uninspired. Of course there were extenuating circumstances (injured players, clutch shots by the other team), but the falloff was shocking. My explanation? The Big East is overrated and there doesn't seem to be a dominant conference in America, despite what we've been told. Pretty simple. Take a look at the conference breakdown of Sweet 16 teams:

Jon asked me why Pitt always chokes in the tourney. I'll give a simple explanation. Jamie Dixon is a great coach who gets the most out of his players. He doesn't get top-notch talent, he develops 3-4 year college players, so inevitably he succeeds during the regular season with veteran teams that play well together. When it comes Tourney time though, his teams are on a similar plane, talent-level, as the Xavier's and Butlers of the world, so it's a toss up.

Best Games of the Tourney

So far, an exceptional NCAA Tourney has been played. They're have been some good upsets, but the amount of just solid basketball games between two evenly matched teams...Been a ton of them. My Top Five:

2. Texas/Zona. FiveCountGate. Go over to Burnt Orange Nation to read about the 100 different ways Texas got screwed at the end of that game. Terrible officiating aside, this was a hellofa game, Arizona playing above its talent level while the more talented Longhorn kept battling to stay in the game.

3. Michigan/Duke. There was a tremendous talent disparity between the two teams, but that John Beilein defense kept the Wolverines in the game and my God, they had a chance to tie with six seconds left. But Darius Morris' shot found the back iron and the Blue Devils move on. Somewhere Jalen Rose is yelling.

4. SDSU/Temple. Double OT deserves a spot on the list.

5. Kentucky/WVU. Two tough teams that played a completely even game.

UConn v. SDSU. Everyone figured this matchup would materialize in the Sweet 16, because I think we all want to see how Steve Fischer's squad matches up against a Big East team.

Kansas/Richmond. The Spiders are huge and athletic, so they won't be overrun by Kansas.

Butler/Wisky. Can the Butler magic continue against the Badgers? Wisconsin's defense has looked solid against Belmont and KSU.