Share All sharing options for: Dear Nebraska, Welcome to the Big Ten...From Iowa

It's time to officially welcome Nebraska to the Big Ten, and OTE has decided to take on this awesome responsibility ourselves.  Over the course of the next couple of weeks, we'd like to give the mighty Cornhusker fanbase a one stop shop, if you will, on Big Ten teams, traditions, and some insight to the different venues in the conference.  Our goal is to make your transition to the Greatest Conference In All Of College Football as smooth as possible, and most importantly, we want you to feel welcome and at home when you travel to our stadiums to watch your team get their ass kicked as you make the rounds through Big Ten country.

We were busting our butts working for WISUFA - remember, the Western Inter-State University Football Association. We combined for four out of the six titles that they gave out. Of course, when the bubble burst, we each went our independent ways. I hooked up with the guys at Western. You took up with the Missouri Valley folks. I even tried double dipping in both leagues for a couple of years (we shared that MVC title in '07, remember?). Eventually though, I settled down with Western. You seemed happy out in the Missouri Valley. You really liked that group of toadies that you had at your heels when it became the Big 8, didn't you? Wasn't quite as cool when the big guys from Texas started pushing you around, was it? Don't sweat it. There's no Texas here. Yeah, Ohio State and Michigan are big boys, but they don't get to throw their ---hold on a second --- sorry. Had to respond to Doc Gee.  He gets upset if I don't respond in less than five minutes. 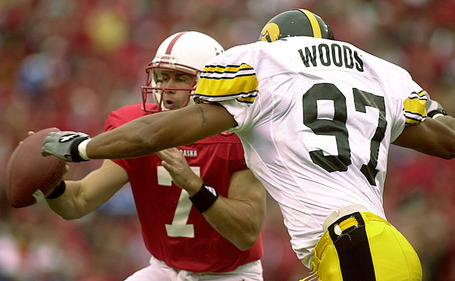 So Bugeater, I have to admit, I'm excited to have you here. It looks like we'll be spending Thanksgiving together. That's cool. I come from a big family. We all travel, and I expect that our get together will be a big deal. I'll be coming over this year. We'll clean up our place for you to come by in 2012. So in a way, I may be a year or so premature in telling you about what you can expect when you come to my house. But like I said, I'm pretty excited about this. So excited I gave up my yearly outing with Wisconsin (Truth be told, I'm not missing him too much. Let's just say that a diet of beer, cheese, and sausage does not make a body produce less methane...). So what should you be ready for?

2011 should be a mid-level Hawkeye team. Good enough to upset some opponents in Kinnick. Not good enough to win the big games on the road (like in Lincoln).  The offensive line and running game look to be crucial as we bring in a new QB and lose three of our four top receivers. The defense loses three top defensive linemen and both safeties. There are going to be growing pains, but they may be masked by a schedule that is much friendlier than the last two.

My guess is that what you'll see in 2012 will end up being better than what we bring to you this year.

Yeah, we're friendly, too. Maybe not as stupidly nice as the goofs up in Minnesota, but we will welcome you before we try to dismember you. What you might notice most about the people, is just how close they'll be to you. Kinnick Stadium has the narrowest sidelines in college football. The front row of fans will be close enough to hear every word your coaches say. And you'll hear every taunt and curse that we politely throw in your direction.

Of course, we're biased. But, Kinnick Stadium is a beautiful place to spend a Saturday afternoon (even when TV decides that the afternoon starts at 11 AM). There are no decks. There are no corncob ramps. There are two large stands on each side of the field, and smaller enclosures around the endzones. There will be more than 70,000 people when you show up. It gets loud. It also gets cold and windy, but we know that you're no stranger to that.  As your closest conference road trip, we expect to see some red sprinkled among the stands when you visit, but the road sections are generally in the Southeast corner.

Kinnick is surrounded by a neighborhood and the the UI Hospital Leviathan. As such, we take our tailgating to the streets. Melrose Avenue is a great scene, and you'll need to try the Big Ass Turkey leg. Now, last year saw a crackdown on some of the pre-game abuses, but I doubt that you'll find the scene unwelcoming in any way. After the game, the Ped Mall will be a fine place to spend a Friday night. You'll find a healthy number of watering holes there. If it looks familiar to you, that's good. The same man who designed the Ped Mall in Iowa City traveled west and designed the Pearl Street Mall in Boulder. So maybe your Black Friday traditions won't be all that different.

We look forward to seeing you in 2012. We also look forward to you finding out what it's like to be playing football in a real conference. We think you'll fit in here very well.