Bad last few weeks? Bad entire season? Disappointing yearlong performance by your stalwart veterans? Missing key performers due to suspension, expulsion, or injury? No matter, a solid/spectacular performance in this weeks Big Ten Tourney can make you forget all those bricks, sighs, and drops out of the Top 25. As the old Russian proverb says, Better or worse, Lord let it be different. And different is exactly what a few teams need right now. Onto some intriguing Tourney questions...

IS MICHIGAN STATE REALLY AS BAD AS THEY LOOK?

Yup. Although the trademark defensive intensity has picked up since the Iowa blowout loss, the offense is levels of bad and everyone except Kalin Lucas is underperforming. You know that old saying "I would hate to play Team X right now?" Teams are saying the opposite about the Spartans. Saturday's loss to Michigan pretty much spells out all the negatives - Lucas scored 20+ points, but had to take 20+ shots. Draymond Green, forced the issue on both ends of the floor and fouled out. When you're pressing, bad things happen, and Green is a fighter, but he's up against the odds this year. 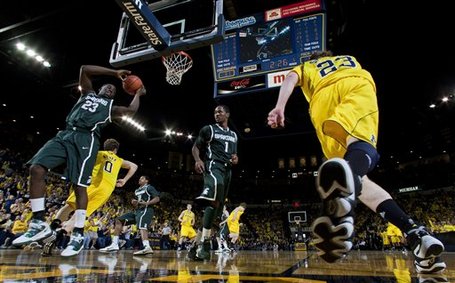 The Spartans have played themselves out of a first round bye and will pick up either the 6th or 7th seed, facing either Indiana or Iowa. A presumed win there pits MSU versus Wisconsin or Purdue, both who have both savagely beaten the Spartans in the last couple weeks.

MSU, long considered to be a solid 10 or 11 seed, are now teetering on the NCAA Tourney Bubble. Everyone has tremendous faith in Izzo's March magic, but this team may need two victories to cement a Tournament berth.

COULD ANYONE OUTSIDE THE BIG THREE WIN THE BIG TEN TOURNEY?

HOTTEST PLAYER GOING INTO THE TOURNEY?

....and he's probably going to get another shot at beating Purdue in the Big Ten tourney semis. This All-Big Ten performer has picked up the scoring as the season went along, but not at the expense of other teammates. Also; that penetrate and kickout perimeter-based offense fits Taylor's game like a glove... 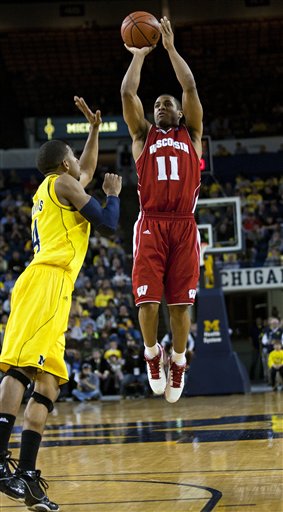 TEAM MOST LIKELY TO IMPROVE ITS NCAA SEED?

Other than the NIT-or-less crowd, the team that can take the biggest leap is Illinois. A virtual lock as an 11 or 10 seed, the Illini could jump to a 7 with three straight wins.

PLAY THE MARCH TO THE CHAMPIONSHIP GAME AND YOU COULD WIN A TRIP FOR TWO TO LAS VEGAS! LOOK FOR THE CODE INSIDE SPECIALLY-MARKED PACKAGES 12-PACKS OF BUD LIGHT ENTER CODE AT FACEBOOK.COM/BUDLIGHT ----- No Purchase Necessary. Open to U.S. residents (except CA & TX) 21+. For a chance to win a Grand or First Prize, Game Period 1 begins 3PM CST on 2/14 & ends 3PM CDT on 3/18.

For a chance to win a First Prize only, Game Period 2 begins 3:00:01PM CDT on 3/18 & ends 3PM CDT on 4/30. To participate, obtain a Code from inside specially-marked packages of Bud Light beer or to request a Code without purchase, visit budlight.com/freecode during a Game Period. Limit one (1) free Code request/day/person or email address. To play, text HOOPS to BEERS (23377) & follow prompts or visit budlight.com/freecode & follow instructions. See Official Rules inside package or at budlight.com/freecode for complete details. Void in CA, TX & where prohibited. Enjoy Responsibly – ©2011 Anheuser-Busch, Inc., Bud Light® Beer, St. Louis, MO