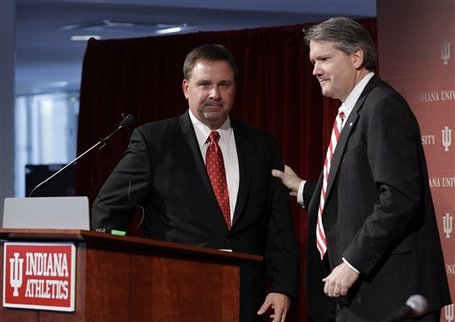 In Point/Counterpoint we’ll be identifying each team’s x-factor, and then offer arguments both in support of and contrary to the assertion said x-factor will spur the team towards glory. Today we sit back and debate the effect Indiana’s new coaching staff will have on their 2011 season.

Following Bill Lynch’s dismissal as head football coach in November 2010, Indiana University announced the hiring of Kevin Wilson as his replacement. Most recently offensive coordinator at Oklahoma, Wilson comes with Big Ten experience having served on Randy Walker’s staff at Northwestern for three years (1999-2001), ultimately becoming assistant head coach (in addition to coordinating the offense and coaching the quarterbacks) in 2001. While in the Big XII he directed an offense that consistently ranked near the top of the national rankings while churning out award winners and NFL draft picks. The man knows how to run an offense. But what impact will he and his staff have in Bloomington this year?

Point: The addition of Kevin Wilson and his staff will help Indiana realize gridiron success in 2011.

This point is predicated on a very subjective notion of what constitutes success. Nobody is (or at least nobody should be, lest they be) predicting a BCS bid for the Hoosiers, but a bowl invite in Year One is realistic. A quick glance at the schedule shows at least seven winnable games. Unlike his more immediate predecessors (Bill Lynch and the late Terry Hoeppner, whose resumes included recent stops at Butler, Depauw, and Miami of Ohio), Wilson has far more big program and big conference experience. Similarly, his staff includes people hired away from the likes of Northwestern (Kevin Johns, passing game coordinator), Michigan (Rod Smith, co-OC and QBs coach), and Nebraska (Mike Ekeler, co-DC and LBs coach). A staff not only versed in the culture of the Big Ten, but also battle-tested in the trenches of heated rivalries (Michigan-Ohio State, Oklahoma-Texas, etc.), championship games, and BCS appearances, should provide Indiana an edge we haven’t seen in the program since…….well, ever. Indiana should be able to win at least seven games, and maybe even put a scare into some of the heavy hitters on their 2011 conference slate.

Indiana has come close in the past, only to come up snake-bitten in the end, be it blowing leads or dropping a go-ahead score against heavily-favored Iowa. The thought here is Wilson breathes some confidence and toughness into the program, making the Hoosiers a far tougher out than people typically expect. Counter-point: Not only is Indiana still Indiana, the new coaching staff is set-up to fail in 2011.

Indiana is Indiana: expect everything from basketball, get nothing from football. Right? While the new coaching staff looks nice on paper, the unknown variables pose a set of questions that appear to have unsavory answers. Wilson and Johns will be deploying the spread offense that places an inordinate amount of pressure on a quarterback to make the right decision. Not only is there no Sam Bradford waiting in the wings, they must also find a replacement for Ben Chappell. Adding insult to injury, standout receiver Tandon Doss opted to forego his final year of eligibility and declare for the NFL draft, leaving an already hamstrung offense in an even worse position.

Not only will they be installing a complex offense (which almost never translates in the first year), but it remains unclear whether or not the spread offense will bring you consistent success in the Big Ten. Yes, Purdue won with it in 2000, but Drew Brees explains that outlier. Beyond that, spread teams find themselves in the middle of the pack in the Big Ten, as the schematic advantages they draw up are countered time and time again by fundamental tackling on the periphery and strong line play in the interior. While Wilson’s spread will spend more time going vertical than RichRod’s, he will realize very early on how difficult moving the ball is when he doesn’t have an offensive line full of blue chip recruits blocking up front. Assuming he works miracles on the offensive side, Wilson must also find a way to stop the other team from scoring. Indications are Indiana will operate out of a 4-3 this season, as opposed to the three-down sets used a majority of last season. This is a welcome addition, but they must prove they can withstand the pounding that the conference schedule will dish out. Moreover, score, punt, or turnover, the pace the offense hopes to set ensures the defense will be on the field for long stretches. If they fail to light up the scoreboard, you might want to take the 'over' on games where the Indiana defense surrenders more than fifty. Finally, despite bringing much to the fore in terms of experience, the new staff is relatively…inexperienced. The head coach was most recently a coordinator; the co-coordinators all position coaches. While everyone has nice credentials, nobody on the staff has taken on the amount of responsibility they will be charged with this year. This will catch up to them at some point during the season- the question is, will they be mentally tough enough to keep the program from falling into old habits?