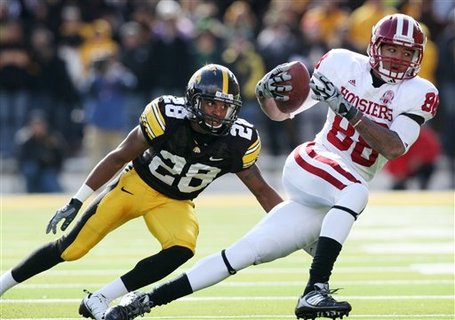 The concept for this feature is pretty straightforward: It's 4th and 3 with 1:00 to play in the Fourth Quarter and Indiana is on the opponent's 20 yard line down by 5. What play do they run and why?

It's a simple premise, but it gives us the chance to explore Kevin Wilson's system on both sides of the ball. The way I see it, both questions boil down to two things: schemes and personnel. Let's see what the Hoosiers are made of in 2011.

On Offense: Quick Slant to Damarlo Belcher or Slip Screen to Wills

The obvious first question here is what playbook to look at. Although a decent chunk of the starting Hoosier offense from Bill Lynch's final season is back, I don't think there's any question that Kevin Wilson is going to stick with what worked for him in Normon.

Don't get me wrong, that doesn't mean the 2011 Hoosiers will run the 2006-2010 Oklahoma spread no-huddle verbatim -- after all, Wilson doesn't have Sam Bradford, Trent Williams and Jermaine Gresham at the helm -- but I do think it means that the best evidence of how Kevin Wilson's Indiana offense will operate in do-or-die situations in 2011 is how his past offenses have operated with it all on the line.

The next logical question is run or pass.

Removing the obvious run and pass situations (i.e. 4th and 1, 4th and 9) from the equation leaves us with two rush attempts on 4th and 2 and 4th and 5.

Obviously, two conversions don't tell us much. Especially, when you consider that Oklahoma had a better rushing offense in 2010 than Indiana is bound to have in 2011.

But what about Wilson's tendencies in similar yardage situations in close games?

I looked at 22 plays from Oklahoma's games against Utah State, Air Force, Texas, Missouri, Texas A&M and Nebraska in 2010 where the Sooner offense needed exactly 3 yards for a first down. Of the 22 plays, Wilson called 9 runs and 13 passes.

So Wilson slightly favors the pass to pick up a quick 3 yards. Does that mean he'll put the ball in the air on 4th and 3 for all the marbles?

I say yes, especially when you consider how much better of a run blocking offensive line Wilson had at Oklahoma than the one he'll have at Indiana.

What play, and to whom?

Okay, so Indiana will pass. What play will Wilson call and who will be the primary receiver?

I think that our hypothetical opponent will expect the pass, so I don't expect play action. I say Wilson calls a quick slant to Damarlo Belcher, and counts on Belcher to get in front of his man and hold onto the ball.

I asked Graham to give me his thoughts on the 4th and 3 hypo. Here's what he had to say:

Indiana will feature a new quarterback, so you probably shouldn't call a straight drop back play that demands reads. Why not a slip screen to Willis? Fake a block on the rushing linebacker, dump down easy throw, pick up a blocker, and fall forward for 8...

But suppose it was the opposite. The Hoosiers are up by 5 and playing defense. What coverage do they go with and why?

On crucial downs like this one Indiana needs a defense that's equally capable of defending run and pass. That's because the Hoosiers are saddled by a soggy run defense on one hand (80th nationally in 2010) and an inexperienced secondary on the other.

Both Doug Mallory and Mike Ekeler seem to be proponents of a base 4-3 defense, so I think it's a safe bet the Hoosiers bring four down linemen. With only one veteran defensive back, I don't think Mallory and Ekeler gamble with a blitz. I like them to rely on an in tact defensive line and two experienced linebackers in Leon Beckum and Jeff Thomas and play a straight Cover 4.

The advantage of the Cover 4 is it allows Indiana to play the run first, but at the same time forces the pass outside. The down side it is leaves IU vulnerable underneath. It's a compromise, but I think it's ultimately a good one in the run-heavy Big Ten.

You have to remember that Indiana has shi*ty safeties and pass coverage. (See: Iowa v. Indiana 2009, the famous 3rd quarter Stanzi implosion/4th quarter comeback). So please god, 2 safeties, but I wouldn't play the odds. F*ck the odds. Give 'em a corner blitz plus bump run coverage. Pray someone misses a blocking assignment. If your D fails, at least they failed doing something vaguely interesting. The Iowa 2009 game saw a lazy IU defense sit in a cover 2, confused 4-3....and get burnt. One more thought. Dump downs and quick hitters hurt. Imagine...set up in a 4-3, drop one of those D Ends, one of those undersized DE's that Indiana has like 10 of...confuse that QB. An imaginative defense in Bloomington, imagine! (Of course, then you have to teach what looks to be a vaguely improved defense new tricks.)