Share All sharing options for: B1G 2011 // Keeping the Enemy Close - Hammer & Rails Explains What Losing to Indiana in Football Feels Like

Hammer and Rails...meet Indiana week...after a surprising Indiana win in 2010...allowing the Hoosiers to avoid an 0-8 conference record...this should be intriguing. My thanks to TMill, per usual.

Normally when Graham e-mails me to talk about Indiana Football there isn't much to talk about. Since the Hoosiers often don't do a lot on the gridiron we normally toy with them. Purdue's recent struggles have made us even less relevant than usual, so lately the discussion has been about basketball, where Cody Zeller is about to become the new Hoosier Jesus and lead them back to the promised land (even though Tom Crean is a stellar 3-41 away from Assembly Hall). 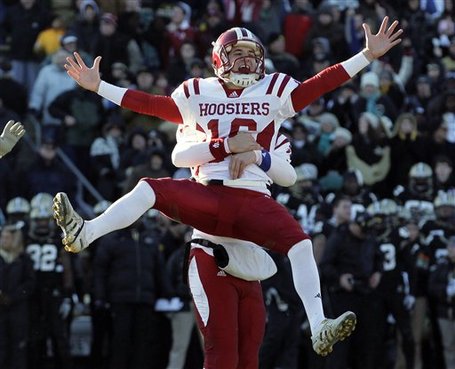 Then last year happened. Indiana's 34-31 overtime victory at Ross-Ade Stadium was the cherry on top of the shit sundae that was Purdue's 2010 football season. We came in thinking eight wins, but left with 8 losses, six in a row to close, the first home loss to Indiana since 1996, and really the first loss that didn't have extenuating circumstances since 1996.

John at Crimson Quarry and I disagree over this, but Indiana's 13-7 victory in 2001 was greatly helped by a virtual monsoon in Bloomington that grounded our pass-favored offense, giving them an advantage because they were run based. Indiana's 2007 victory by three points saw a near Indiana collapse (a trademark of the Bill Lynch era) where the Hoosiers blew a 21-point lead, but rode the Play 13 momentum to victory.

God, I really do sound pathetic in making those excuses.

Anyway, there were no excuses last year. Purdue crapped the bed at home against a team that had lost 13 straight Big Ten Conference games and would later fire its coach. As is typical (15 times since 1998 by my count) Purdue scored within the final minutes to take a lead, only to flat out refuse to stop the comeback drive by the opposition. When Mitch Ewald kicked first the game-tying field goal with four seconds left, then the game winner in overtime, no Purdue fan was surprised. As I commented, it was no surprise that Tandon Doss ran across the field unopposed to grab the Old Oaken Bucket from behind the Purdue bench. We hadn't done anything to show we were interested in stopping them when it mattered, so why stop him then?

So yeah, I am pretty pissed off that Indiana has our Bucket at the moment and that my latest memory of Purdue football is getting outcoached in the fourth quarter by Bill-Freaking-Lynch. Sure, we should be happy with a 70-37-6 overall lead in the series and a 56-27-3 in the Bucket portion of the series, virtually guaranteeing that I will never see Indiana take the lead in either category, but those are slight concessions when I see the empty dust ring in the Mollenkopf where the Bucket should be. 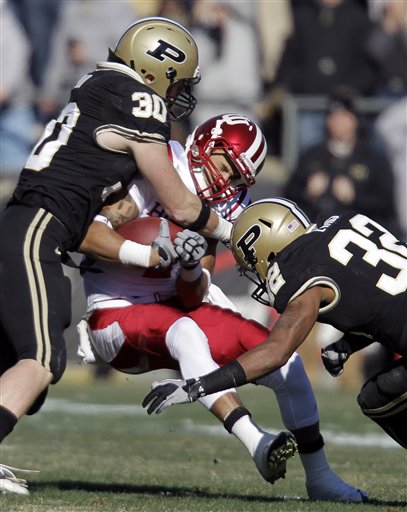 The Bucket has resided in West Lafayette for 57 of the football seasons since 1925 (Purdue maintained possession after the 15-15 tie in 1958). It has been in West Lafayette in 11 of the 14 seasons since Joe Tiller revived the program in 1997. That is why I call it our Bucket. For as long as I have been a Purdue fan we have rested on one thing with the up and down nature of our program: "At least we're not as bad as IU." Even with this recent swoon of three straight losing seasons we comforted ourselves that we were at least better than Indiana. That was until November 27, 2010.

For Purdue when we lose the Bucket, it burns us until the next chance to get it back. Purdue has done so with gusto in recent years too. Indiana won it in 1996, but Purdue took it back by force 56-7 in Bloomington the next year. Indiana won in 2001, but Purdue won 34-10 the next season. The best example came in 2008, when Indiana's three point win the season before resulted in a 62-10 beatdown that was the widest margin in the series history the next year.

Only Minnesota-Wisconsin, Missouri-Kansas, Nebraska-Kansas, Texas-Texas A&M, Miami-Cincinnati, North Carolina-Virginia, Auburn-Georgia, and Oregon-Oregon State have been played more than Indiana-Purdue, so there is more history there than a lot of Big Ten rivalries even if it is more of an in-state rivalry. It has only mattered on a national scale in 1967 and 2000. In 1967 the Hoosiers won 19-14 in Bloomington to tie with Purdue and Minnesota for the Big Ten title and earn their lone Rose Bowl bid. In 2000 Purdue beat the Hoosiers 41-13 behind some guy named Drew Brees to go to its last Rose Bowl.

So yes, it may not matter that much outside the state of Indiana, but when you have two programs that traditionally have been in the bottom half of the Big Ten sometimes that is all you have. Unfortunately, I fear we may be back to a "Bucket or Bust" level.