Shortly after showing off her Boilermaker credentials, Hillary Clinton suffered a catastrophic ACL injury, costing her a shot at the White House (via media.tumblr.com)

It's Thursday, which means time for some potluck.  And what's the official drink of potlucks?

So just like Hillary Clinton trying to be "normal folks," it's time for you to slam back a shot of whiskey, chase it with a pint of beer, and get ready for the Purdue Potluck (it's handicap accessible, to accomodate Purdue's injured athletes! Let's all make sure to keep Robbie Hummel away from any hot chafing dishes, okay?).  Inside, we'll discuss the NCAA's abuse of justice in regards to Keith Smith, a QB controversy at the Big Ten's arguable "QB-U," Wilford Brimley returning from retirement,  and how to build a better mascot. 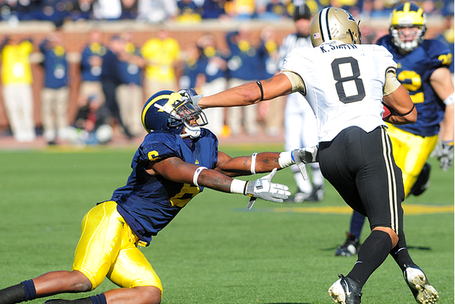 1. Appetizer: I'll make no bones about it -- I LOVE Keith Smith.  Or should I say "loved" Keith Smith, after the NCAA screwed a talented student-athlete out of a deserved sixth-year of eligibility, weakening Purdue's already questionable 2011 WR depth chart.  How much did the NCAA screw Purdue and Keith Smith by not granting him a 6th year?  And how many more wins do you think Purdue would get in 2011 with Smith in the lineup?

Graham Filler: I admit it. I love Keith Smith too. He spent the entire 2009 season open. I can't truly explain why....or how. I just know that every time Smith was targeted, there was a good 1-2 yards separation from the cornerbacks. He had the perfect combination of a short-pass-happy offense, great hip swivel, great body control, above-average hands.

Unfortunately, the answer to your second question is: Zero. This Purdue team is miles away, offensive philosophy-wise, from the 2009 squad that could throw the ball around a little. A short throwing team PU is not, but it's not a power run team either. The identify is still in flux on the offensive side of the ball. So sure, would Keith Smith make any of the possible quarterback's jobs easier? Yes. But this year he's not a one or two game difference maker. Again, not a knock on the very talented Mr. Smith, more of an observation based on reality.

2. Salad: According to the old saying, "if you have 2 QBs, you have zero."  Between Drew Brees, Kyle Orton, and Curtis Painter, Purdue has been immune from QB controversy for some time (and arguably has been the Big Ten's "QB University")....but not anymore.  Who is Danny Hope's best option behind center this season, and why: Robert Marve or Rob Henry? Or should Purdue completely ignore their QB, and instead immediately try for FGs wherever they are on the field, relying on K Carson Wiggs(who hit a 67 yard FG in the Purdue spring game that could have been good from even longer)?

Jonathan Franz: At first glance Robert Marve and Rob Henry might look pretty similar. They're Caucasian, about the same size (6-1/210 vs. 6-2/198), and both have payed homage to 1995 by sporting "Princeton" haircuts in the past.

But that's where the similarities end. You see, when Danny Hope etches the name of one of these candidates at the top of the depth chart sometime in August, he's not just choosing a quarterback, he's charting his offensive destiny. Does that voyage include a veritable but fragile gunslinger with a laser arm in Robert Marve, or a versatile "Jack of all trades, master of none" in Rob Henry?

It's become a sporting cliche to say something is a dichotomy, but come on. Look at these two. Marve is the classic pocket passer, while Henry gels best on zone read plays, when he can read the interior linemen and make plays with his feet. When Marve is at the helm, the Boilers average 32 pass attempts a game. With Henry on the other hand, the Boilers average 22.4. That's 30 percent less pass plays.

A lot of Purdue fans like Henry's versatility, but I'm here to tell you something. The Big Ten is where zone read offenses come to die. Take Oregon in 2009 for example. Jeremiah Masoli and the Ducks were freaking unstoppable, coming into the Rose Bowl averaging something like 42 points, until they met a big and athletic Ohio State defensive line, and racked up a piddly 17. Ohio State isn't the only school that's got size and speed on the D-Line. There's Michigan State, Iowa, Penn State and Wisconsin, just to name a few (Nebraska is of course on this list too, but Purdue misses them on the schedule in 2011). And guard Justin Pierce ain't around anymore.

About the only team to succeed in the Big Ten running the zone read was Michigan last year, and they had Denard Robinson. Henry is an elusive guy, but he's no Shoelace.

If I'm Danny Hope, I'm honest with myself. I'm not going to win week-in and week-out in conference with Rob Henry skipping around like a schoolgirl behind the line of scrimmage. Put the ball in the hands of an accurate passer and count on him to neutralize the talent disadvantage one-on-one.

3.  Potato/rice dish: True or false time: This is a do-or-die season for Danny Hope. If Hope and Purdue don't go bowling, Hope is collecting unemployment and the Boilers are talking to Wilford Brimley Joe Tiller about diabetes and Quaker Oatmeal returning to the sidelines in West Lafayette.

Chadnudj: Look, this is Purdue we're talking about here.  Until I started at Northwestern, I thought Purdue was a private school, simply because it (a) specialized in engineering, and (b) was another school, like Northwestern, that did not have the name of its state location in its school's title.  No one nationwide thinks "Purdue = perennial football power."  They expect solid play, and probably bowl seasons 60%-plus of the time, but not miracles.

I get that Purdue fans may be disheartened in the Hope era, but it's not like Joe Tiller left the cupboards brimming with talent that Hope squandered in Brewster-like fashion -- Joe Tiller's last Purdue team was pretty atrocious.  Hope knows what he's doing, and but for a completely insane rash of injuries last year, might have gotten Purdue bowling in 2010, his 2nd year at the helm.  I think Hope is safe with 4-5 wins, provided the team plays hard, improves as the season goes along, and competes well in the most important games (i.e. vs. Indiana and That School in South Bend, plus probably against Michigan and Ohio State).  That being said, I actually think Purdue has a decent shot (again, barring another 2010 plague of injuries) of bowling, making this a moot issue.

Graham Filler: Originally I would think firing Hope after another mediocre season which can't be blamed on him would be a ridiculous idea, but uh, then I did a bunch of reading...and now I believe it's a definite possibility. The key is: Indiana, the supposed rival of Purdue, fired their coach after his third year. Apparently, the Hoosiers felt they could go bigger than Bill Lynch.

So, hell, if the Hoosiers are fighting for respectability by firing a third year coach, who says Purdue would think Hope is coach for life? Andlet's be even more honest, Hope hasn't pushed Purdue into any discussion of upper echelon football programs. So what good is it having Hope around? This is truly do or die for Hope; if it's a bunch of close games, plus a 5-7 record...mmmm. But if not: Heads! Will! Roll!

4. Hot dish/meat dish: Last year was a nightmare for Purdue on offense -- they couldn't pass the ball (112th in the nation with just 150.8 ypg in the air), couldn't score (105th in the nation with just 19.7 ppg), and couldn'trun aside from QB Rob Henry (Henry led the team with 547 yards rushing; Purdue ran for 160.8 yards per game, which is decent), and didn't really stop teams from scoring (28.8 ppg allowed, which was 74th nationwide).  I'm actually hopeful for Purdue on offense -- torn ACLs were to blame for much of the Boilermaker's offensive woes, and the return of Ralph Bolden will help the running game....but their defense, without All-World DE Ryan Kerrigan worries me.  Does health on offense equal improvement (or a bowl season) for Purdue? Or will a weak defense (thanks to the loss of Kerrigan) doom Purdue?

I expect the Purdue offense to improve on its numbers from last year, but remain unconvinced they'll realize some sort of significant leap. While I have this inexplicable confidence that Rob Henry will grow into a solid Big Ten quarterback, I am waiting for Danny Hope and Gary Nord to prove they can develop the position the way Joe Tiller did. Neither has a proven track record in that regard (Nordhas bounced around the lower levels while Hope's spent more time moving from team to team than Shaquille O'Neal has the last several years). From an offensive standpoint those three have much riding on this season, and success (be it mere improvement or a bowl game) rest on their shoulders. Two more questions: who carries the load at running back, and will they be able to maximize Antavian Edison's play-making abilities? The question mark at running back troubles me most: if Henry's having an off day, how do they hope to move the ball?

That being said, I feel the defense actually has a chance to be the stronger of the two units. As Graham noted the other day, they return nine starters on that side of the ball (one of the two graduates being the aforementioned all-everything Ryan Kerrigan, who will probably be drafted tonight), meaning they will be laden with upper classmen. Expect them to play with pride week-in week-out, but with a special sense of vindictiveness when they take their shots against in-state rivals Notre Dame and Indiana. Moreover, lost in the midst of new head coach hires and coordinators bouncing around all over the conference, Purdue probably made the most underrated hire of the off-season: linebackers coach Phil Elmassian. Elmassian is a first-rate positions coach witha history of producing all-conference players all over the country. Combined with Gary Emanuel's ability to coach up the defensive line and Ricardo Allen holding down a cornerback position, Purdue's defense looks solid enough at each level. The more I think about it, the more I like what they have going on here.

Looking at the schedule, three games jump off the page as highly probable victories: Middle Tennessee, at Rice, and Southeast Missouri State. Five are winnable: Notre Dame, Minnesota, Illinois, at Michigan, and at Indiana. Assuming Purdue takes care of business in those first three contests, will they be able to scrape out a sixty percent mark in the winnable games? It all comes down to quarterback play and Hope's ability to steady the ship.

5. Dessert: There was a ton of controversy over Purdue's decision to "revamp" Purdue Pete, only to return to the original mascot when fans revolted.  For dessert, we'd like you to either: (A) Pick a better mascot than Purdue Pete for the Boilermakers, or (B) Change the mascot of another Big Ten school to be less lame.

Chadnudj: Way too many options here.  I mean, for all its history and tradition (and Leaders and Legends), the Big Ten has some fairly lame mascots.  The Big Ten has no live animal mascots, for instance (admit it -- it'd be terrifying to have a wild Nittany Lion lead JoePa and Penn State out onto the field, a la Ralphie the Buffalo at Colorado)...Minnesota's so-called "Golden Gopher" actually looks like a chipmunk....Chief Illiniwek is racist....and no one knows what the hell a Hoosier is.

So in addition to making the Gophers actual Gophers, having JoePa call upon his fur-trapping skills to snare a Nittany Lion, giving the Hoosiers an actual mascot, and finding a politically correct mascot for that school in Champaign-Urbana, here are 3 more necessary changes to Big Ten mascots: 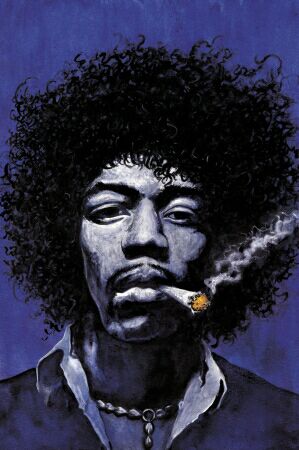 Pat Fitzgerald Not Only Has the Voodoo Wizard Power to Beat Iowa Every Year....He Also Can Enlist
Jimi Hendrix's Ghost to Be Northwestern's Mascot (via 3.bp.blogspot.com) 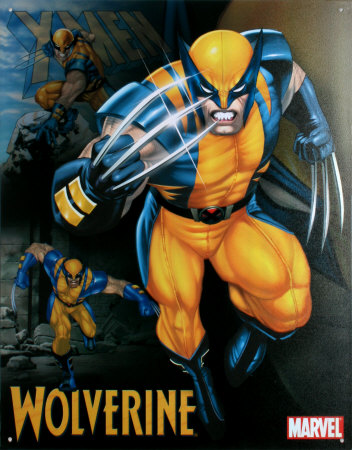 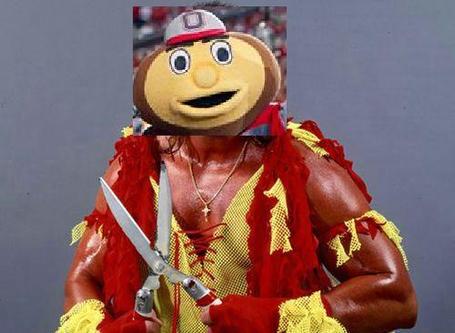