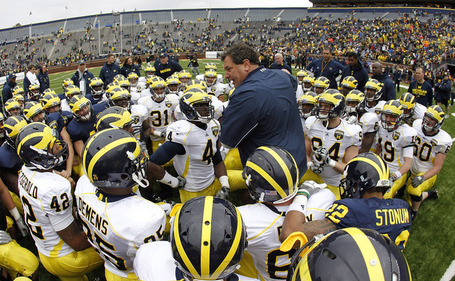 Cam Gordon (#4) front and center as Hoke addresses the TEAM (the TEAM! the TEAM!)

It is said that there are three phases of the game: offense, defense and special teams. If you watched any Michigan football last year, you'd know that that team only really had one, and come B1G season that phase wasn't even really that good.

Here's a great stat for you to sum it up: last year the Wolverines' field goals made-FG attempted was 4-14, which is 29%. To give you a little context, Ohio State (best team in B1G last year) was 20-26 (77%) and Indiana (worst team in B1G) was 18-21 (86%). Attempts look a little low for Michigan? That's because our field goal squad was so inept that Michigan simply stopped attempting field goals, as they were equated to foot-based turnovers. The situation became so dire that a 4th and 3--heck even 4th and 10 or 4th and 15--anywhere within reasonable field goal range was not even a question: the Wolverines were going for it. Having gone to Michigan under Lloyd Carr which was about as conservative (read: defense, special teams wins games) as it comes in the B1G next to Tresselball, Meech special teams under Rodriguez was an unequivocal abomination. So what I'm trying to say is the answer last year on fourth down and ANYTHING inside the 50 at any time in the game was (shrug, sigh deeply) and GO FOR IT!!

But that was then, and this is now.

This season, 4th and 3 will be a bit more difficult to predict (thankfully). Hopefully incoming freshman kicker Matt Wile will give an immediate boost to the kicking game, unlike last year's incoming freshman who was beat out (consistently) by walk-on Seth Broekhuizen, so that 4th and 15 inside the 20 when the Wolverines are down by 2 won't make Michigan fans admit certain defeat. Did I also mention we actually have a special teams coach on staff this year? Bonus!

Hoke has stated repeatedly that the style of play he prefers is MANBALL, which for those not briefed on Hokespeak is defined by a power run game and playing solid defense. That's all well and good in theory, but when your starting RB from last year is 5'6 180 lbs Vincent Smith, some physical limitations enter the equation. 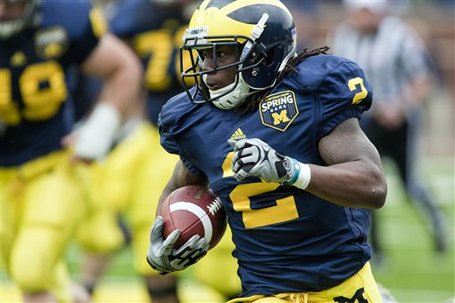 Though oft-injured Sr RB Mike Shaw is the presumed starter this season, expect to see a lot more from So RB Stephen Hopkins, all 6-0 227 lbs of him, on must-have short yardage running situations this year. Hoke is also bringing back something that Michigan fans haven't seen for awhile: the fullback! The Wolverines have only one on the roster, but thankfully it's the blonde bruiser John McColgan. So look for him to be clearing the path if Michigan has any success running the ball this season.

In addition to the fullback, Hoke has unearthed another relic of Michigan football that he has stated he plans to use plenty in his offense in the coming years: the tight end! Since Rich Rodriguez didn't use TE's in his offense, and thus didn't recruit any, there are only two on the roster. Thankfully they are both physical freaks leftover from the Lloyd Carr days in Sr. Kevin Koger and RS Jr. Brandon Moore (who is majoring in Brain, Behavior and Cognitive Science. Holy crap!). Kevin Koger is the real deal--fast and ferocious with great hands--so if he can prove to be a consistent threat, I believe a play-action fake on 4th and 3 to him would be a strong option.

And, of course, there is always Denard Robinson. Hoke and OC Al Borges have stated publicly several times that Denard is going to run a lot less this season, but he will "make up for it in passing yardage." Denard came out of every game last season as he was dinged up in one way or another, being used as a 190 lbs every-down-back in Rodriguez's offense. Having other viable threats in this offense should make the QB draw or the zone-read a lot less predictable, and thus a lot more dangerous.

At this point it's pure speculation as to Hoke and Borges's 4th and 3 policy. Are they mavericks? Probably not, considering Hoke comes from the Lloyd Carr school of game management. One thing is for sure though, this season is sure to incur some significant growing pains with the entire offense (and defense for that matter) being, well, under construction.