Share All sharing options for: B1G 2011//Keeping The Enemy Closer--Maize And Blue Is Latin For Mediocre Football And Unwarranted Hubris

When I identify myself as an Ohio State fan, most people think 'as a college football fan this guy is probably 95% asshole, but I can get along with the 5% of him that hates Michigan.'  First off, way to be a judgmental ass because you don't know a thing about me, but it's okay.  Secondly, I'm cool with that, because the enemy of my enemy is my friend.

So join me, my new and temporary friends, on why we hate Michigan.  And when this article is over, you may go back to calling me an asshole Ohio State fan, I don't mind.  I understand it comes with the territory.

Whenever Ohio State plays Michigan in anything--football, basketball, women's darts, beer pong, competitive Brazilian waxing, it doesn't matter--if I come across it on TV, I will do a couple things.  I will immediately stop WHATEVER THE HELL IT IS I AM DOING and focus on this singular event.  I don't care if I have ever seen this sport before, if I am in the middle of giving CPR to save a human life, or pulling a baby from a burning building--I stop and focus on what has instantly become the most Important Endeavor in Human History.  And I will cheer like a lesbian at a 'Win A Date With A WNBA Star' promotion for Ohio State to kick the ever loving hell out of Michigan.

And I will never, ever change.

I hate Michigan.  As in I wouldn't piss on you if you were on fire type of hate.  I hate your goddamn winged helmets, your maize and blue colors that look more like piss yellow and black, your 110,000 seat mausoleum...and really, how in the hell can 110,000 people sound like the world's largest gathering of mute quadruple amputees?  Because you lose to 1-AA Appalachian State, that's why, and in recent years, you've been getting beat harder and with more frequency than a teenager's dick. 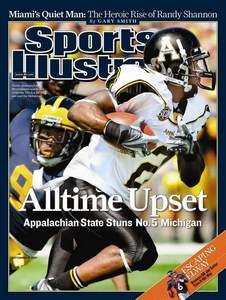 If you can invoke Pre-Wright Brothers National Championships,  I can invoke an EPIC loss from 2007.

Welcome to Detroit irrelevancy.  I hope you find a house, get married, and raise a dysfunctional family.

I've spent my whole life saying 'Michigan sucks', sometimes in a jealous, bitter way...and now you do truly, epically suck.  Like Jenna Jameson at a Sausage festival kind of suck.  You get into nail biters with Indiana, lose to Toledo, your defense has more holes in it than Osama bin Laden's head, and your gameplan against Ohio State looks like General Custer's Little Bighorn rough draft.  It's like waking up Christmas morning and finding a Red Ryder BB gun, a case of Leinekugel's, AND a gift certificate for three free lap dances at Larry Flynt's Hustler Club.

Speaking of Larry Flynt's, Michigan football is like a bad case of gonorrhea--it hurts and it burns when you pee, and you're embarrassed and ashamed.  As well you should be.  You've become the equivalent of a Corey Feldman/Lindsay Lohan bastard ginger lovechild, and I for one couldn't be happier. 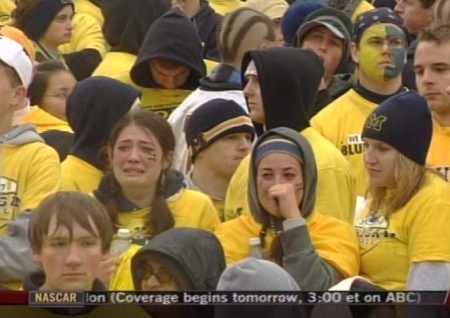 It burns when you pee.

And I hope this 'new' normal becomes the 'normal' normal, and when people look at the B1G, you're in the flotsam and jetsam that is the bottom half of the conference.  I am sick and tired of hearing people say 'Michigan needs to be good for the conference to be good', because that's no longer true.  There's a new era in the B1G, and Michigan doesn't have to be in it, other than cannon fodder for the Big Boys.  Nebraska joined the conference, there's a conference championship game on the horizon, and Michigan as a powerhouse program is about as relevant and impressive as dial up Internet.

I love the fact that you get into triple overtime shootouts with Illinois, if you manage to make it to a bowl against a mediocre opponent, you couldn't have beaten said bowl opponent even if you had a battalion of helicopter gunships on your side, and choose some, ahem, questionable musical selections to fire up the fanbase.

Your program went from recruiting first round draft picks like Jake Long and future NFL Hall of Famers like Tom Brady to guys that don't wear shoelaces like Denard Robinson and guys that would look more comfortable in A Chorus Line than behind an offensive line, like Tate Forcier.  You've gone from a player on the national stage to getting played by the Weak Sisters of the Poor, from being a conference kingmaker to a 6-22 conference showing since 2008.  Six and Twenty Two.  And but for dramatic, last second victories over...wait for it...the Hoosiers and the Illini, you'd be 4-24.  Either one is stunning in a Hoarders sort of way, but six conference wins or four, you've still got a shitpile of junk in your living room the goes to your ceiling.  And in your bedroom.  And den.  And you've got dirty dishes in your bathtub.  And dead cats in your garage.

And I am loving every last second of it.  Every.  Fucking.  Second.

And because you panicked when Lloyd Carr became Lllllloyd Carr, Rich Rodriguez, like Robert E. Lee at Gettysburg, has destroyed what you love.  He took all that was good about your program, dropped trou, shit all over it, and then wiped his ass with that M Club banner your team runs out underneath from for every home game.  34 straight bowl games?  Done.  Stout defense?  Gerrrrrg.  Intimidating team in a madhouse stadium?  Not anymore:

All you can do now is hope that a guy with a career coaching record south of .500 can get you back to respectability.  Because two bigger and better coaches...both alums...turned the gig down.  Or said 'don't even bother asking'.

And one of those guys is batshit crazy.

But that's okay, you'll have Fielding Yost and the early 20th century to fall back on, and you can tell us about how awesome your cavernous, quiet stadium is.  A renovated stadium, to boot, designed to add more suites, seats, and...discriminate against handicapped people.  Until you got sued by Paralyzed Veterans and the Justice Department.  Way to go on that one.  Makes free cars and ink pale in comparison if you ask me.

And you'll be quick to proclaim 'we're the WINNINGEST program EVAH', while you're wearing your raccoon coat and straw hat, and arrogantly riposte that now that there's a 'Michigan Man' running things again, you'll be back to losing 60% of your Rose Bowl appearances in no time.  If you can even sniff the BCS.  Of course you will do that, you're a Michigan fan, and we expect nothing less.

And let's explore this whole 'Michigan Man' myth, shall we?  What does it take to be a 'Michigan Man'?  A phrase coined, ironically enough, by an Ohio State assistant coach.  A Michigan Man didn't even come up with the stupid, trite, goddamn phrase.  HA!  Let's look and see what, exactly, a 'Michigan Man' might be:

Shamed televangelist, embezzler, and all around jackass Jim Bakker is a Michigan man (Muskegon).  I bet he still beats off to pictures of little boys and Jessica Hahn.  Allegedly.

Female serial killer Aileen Wournos is a Michigan Man.  But, you say, she was a woman.  Did you ever see pictures of her?  Sorry, Michigan MAN (Rochester).

Ted Kacynski got a Mathematics PhD from the school, then parlayed that into a one room cabin in the woods and spent the next 30 years mailing bombs to people.  Hail, hail, to Domestic Terrorism U.  There's something to hang your Block M hat on. 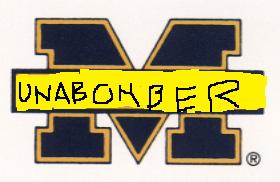 The Leaders and Best...In What the FUCK Crazy since 1817

I'll take tattoos, a lying coach, free cars (allegedly) and NCAA non-compliance over mass murdering terrorists who have an end of life death wish so they can cheat you out of your money for Jesus and give it to their fuck buddy secretary to cover up kiddy diddling (allegedly) any goddamn day of the week, and twice on Sunday.  All while playing in a stadium that was refurbished to hate handicapped people.

Why?  Because I remember the Cooper era; it's burned into my soul and will never go away.  Some people talk about war vets that have Post Traumatic Stress Disorder (PTSD), I have PTCED--Post Traumatic Cooper Era Disorder.  Sometimes, I wake up in the middle of the night screaming in cold sweats because RB Tim Biakabdfosdfasasdfsdcvcsdflguxfvbjkzxdfgtuka just scored again, or Shawn Springs fell again, or Desmond Howard did the Heisman pose again, or John Cooper pooped himself on the sideline--again.  No, what's happening to Michigan now can happen for another 100 years for all I care.

And for the rest of you, I don't want any of this 'I pity Michigan' bullshit to enter your conscious.  If the shoe was on the other foot, they would put that shoe on your throat and show no mercy.  It's payback time for everyone, everywhere, except maybe Indiana.  But you have a new coach, so anything is possible.  Take advantage of it, roll around in it, breathe it in.

It smells like Christmas morning with a hug from grandma, doesn't it?

Oh, come bowl time, I'll say the right things, and politely golf clap if Michigan were to go to and actually win a bowl game, but deep down, in the dark part of my heart, where there is no mercy, fear, or any semblance of a soul, know this:

I don't pity Michigan, I don't feel sorry for Michigan, nor will I ever wish Michigan well and really mean it.  I hate them.  Hate with the white hot of the burning sun.  I hope this era of shit and suck never ends, and I get on my knees every night and pray to the memory of Woody Hayes that the Brady Hoke era will be remembered as 400,000 gallons of highly flammable jet fuel that's leaking towards your Rich Rodriguez forest fire.

Forever and ever.  Amen.