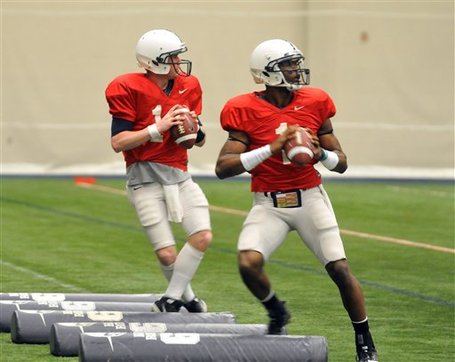 Once again it's time to take sides, as I simultaneously play advocate and Devil's Advocate.  This week sees the Penn State Nittany Lions put under the microscope.  As always, there are no shortage of post-spring storylines in Happy Valley, but have no fear BSD readers, we won't be discussing whether or not this year will be Joe Pa's last on the sidelines.  Although Paterno's longevity will always inspire debate, I've set my sights on a far more interesting question: Will Penn State play in the first ever Big Ten Championship Game on December 3rd in Lucas Oil Stadium?

Is Penn State's glass half-empty or half full in 2011? I'll admit, there's no clear answer to the quarterback quandary, but take a look at what else the Lions have on deck.  Here is a team that returns a respectable 16-starter cadre that's nicely balanced with eight first teamers on each side of the ball.  The Lions' strengths include a succession of solid linebackers, veteran wide receivers and capable running backs.  Is it just me or does this Penn State team look a lot like the 2007 Ohio State Buckeyes?

I know no self-respecting PSU alum would ever admit it, but Ohio State has proven you don't have to be firing on all cylinders to win the B1G, you just have to button down the hatches on defense, limit mistakes on offense and win the field position battle. The Nittany Lions are equipped to do all three, with a classic Tom Bradley defense and solid skill position athletes in tow.  The glue that holds this team together is quarterback Matt McGloin.  And while McGloin might not be mistaken for a game-changer behind center, he fits the mold of the classic risk-adverse signalcaller, a la Todd Boeckman.

It says here that Penn State rides a punishing defense and capable ground game to a 5-0 start in Big Ten play.  Skeptical?  Indiana is Indiana, there's no way Iowa is going to sneak out of State College for the umteenth time with a win, and from there, a sweep of games versus Purdue, at Northwestern and Illinois isn't a stretch.

What's next?  A bye week, followed by an admittedly punishing stretch, versus Nebraska, at Ohio State and at Wisconsin.  If the Lions can win either on the road in Columbus or Madison, they've got a shot at landing atop the Leader's Division.

To be sure, Ohio Stadium and Camp Randall are formidable places to play, but with the Buckeye's off field troubles, and the Badger's loss of key personnel, Joe Pa might be able to steal a signature victory and a spot in the B1G's first championship game.

As Tom adeptly pointed out several seasons back, teams that return only their quarterback and skill position players, often struggle to compensate for inexperience at the line of scrimmage.  It haunted Penn State in 2009 and it will again in 2011.

And this time around the Lions don't have a playmaker they can count on behind center.

A defensive front that was 101st in the nation in sacks last year and an offensive line that averaged only 143 yards on the ground per game will hamstring the otherwise experienced Nittany Lions.  Sure, they field an above average defense, but an offense that lacks identity will fail to score points consistently in conference play.

After Matt McGloin mucks things up in an early conference loss to Iowa, Joe Paterno replaces him with Robert Bolden, who promptly tries to do too much and puts up career low numbers against Nebraska -- closing out the season with three straight losses.

Penn State's 4-4 conference record matches 2010, and is a disappointment by any measure.